In 2015, when soccer coach Sarah Dwyer-Shick ’96 visited young soccer players in Namibia, she brought an assortment of sports bras as gifts. As she traveled around Africa, she was shocked to learn that even the country’s adult athletes, including members of the Namibian women’s national soccer team, had never owned one.

Dwyer-Shick, who spent 15 years coaching at schools in the National Collegiate Athletic Association (NCAA), has spent the past 10 years focused on youth development. She is currently the director of goalkeeping and U11/U12 division head at Rye Youth Soccer in New York. She also owns SJI Training, a sports consulting firm for youth clubs. That’s in addition to growing The Sports Bra Project, which oversees donations of new sports bras collected by volunteers or purchased with financial contributions and distributed to organizations large and small around the world.

At Smith, Dwyer-Shick played soccer and lacrosse and ran track. An American studies major, she focused on the history and sociology of women in sports, which has enabled her to see the wider ramifications and importance of ensuring that all sports are accessible for all women. Here, Dwyer-Shick discusses the organization and its greater objectives.

The Sports Bra Project: Initial Reactions
“Usually the reaction from women is, ‘Oh my gosh, this is so obvious. How did none of us think of this before?’ I played sports, I work in sports, and it’s taken this long for me to put two and two together. We get a range of reactions from the guys: Some understand, and that’s great. Others are a little uncomfortable, but it makes sense to them. And then there are others who are obviously very uncomfortable and either dismiss the importance or just giggle. You’re coaching 15-year-old girls, and you’re giggling about a sports bra in front of them? With so many girls leaving sports as their bodies change during puberty, this is not helping!” 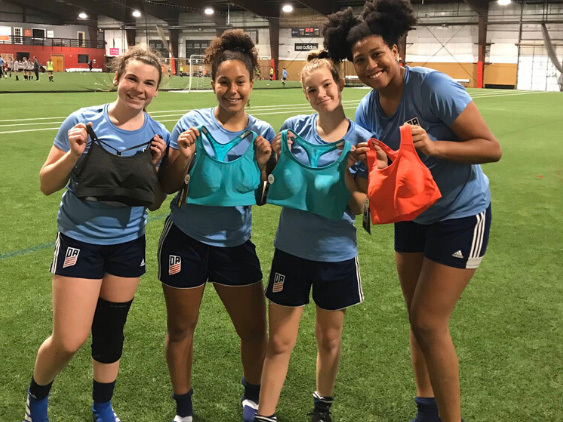 Becoming a Vehicle for Social Change
“It started off really small and was going to be something friends and I did because we recognized the need. We wanted to support organizations that were increasing access to sports as well as provide opportunities to engage our players in giving back to the community. Some of the programs we support are sports only, but a lot of the programs deal with specific issues to their population and use sports as a vehicle for addressing needs or concerns and toward social change. For example, several U.S.-based organizations work with low-income populations where the current costs of youth sports can make them inaccessible. There’s an organization based in India that we’ve given bras to that uses sports as a way of preventing child marriage. An organization in Kenya has ties to health, and a group in Rwanda has ties to education. To date almost 4,000 new sports bras have been collected and distributed to 27 organizations operating in 20 different countries.”

True to Its Roots
“While our goal is to grow and work with organizations that have a wide reach, we want to keep our initial grassroots piece where very small groups that have a need or want to support the project can contact us. The coach of a wheelchair basketball team in Illinois contacted us about hosting a sports bra drive around National Girls and Women in Sports Day. We knew they did not draw a lot of fans and the number of bras collected likely wasn’t going to be large, but we saw it as an opportunity to not only meet our need for sports bras, but as an opportunity to help raise awareness of what she and her team are doing to help increase access to sports. By amplifying the voices of like-minded organizations, we can help normalize the conversations around women in sports and help meet the needs of too often overlooked populations.”

Then Came the Pandemic
“It’s definitely impacted us. We received our 501(c)3 status in February and had a number of drives and distributions scheduled for spring and summer. Unfortunately, for most of the organizations pretty much everything was put on hold. Some of our bras have been caught in transit and others are waiting to be shipped. We launched a virtual drive in July to make up for the canceled events and ensure that we will have enough sports bras on hand so that when things are up and running, we can immediately meet the needs of programs when they are able to restart. The pandemic has impacted the populations we serve much more than it has impacted others. These populations that were already facing obstacles face even more now.”

Some Goals Are Taking Time
“I worked at a youth club where there were six directors and I was the only woman, more than a third of our athletes were female. Unfortunately, this ratio is still common in sports at every level. At NCAA schools, 47 years after Title IX, less than 50% of women’s teams have a female head coach. This lack of representation at the decision-making and leadership level in sports can mean that topics that are part of everyday life for girls and women, like sports bras and the need for feminine products in medical kits, are overlooked or seen as ‘special interest.’ I want to normalize the sports bra as a piece of equipment, but I also want to continue the conversation about normalizing girls’ and women’s involvement in every area of sports.”

What Smith Offers
“In all female environments like Smith it is normal for women to take the lead and be involved at every level of sports without question as to whether she is capable or interested in sports. This is still something not fully accepted in society as a whole and I appreciate more and more the opportunity provided by Smith to not be the only woman in the room.”

A Harbinger of Things to Come 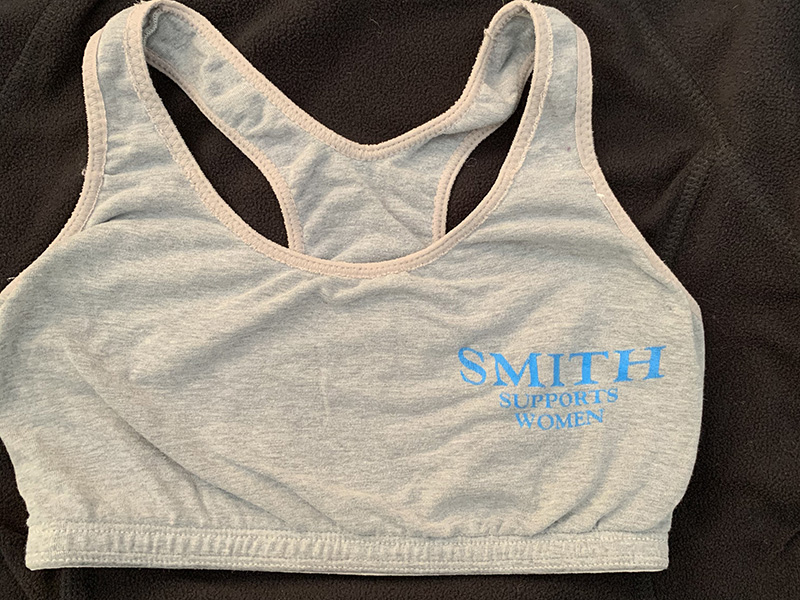 When Sarah Dwyer-Shick ’96, founder of The Sports Bra Project, came from Seattle to Smith as a first-year student, one of the first things she bought on campus was a sports bra. “I think either the junior or senior class was selling sports bras that said, ‘Smith supports women’ she says. “It was the early ’90s, and sports bras were around, but they weren’t as ubiquitous as they are now. And it was such a fun play on words, I thought it was amazing.” What is even more amazing is that Dwyer-Shick still has the bra, pictured here. "Well past wearable," she says, "it has stayed tucked in the drawer underneath my current sports bras."

My Body, But Not My Choice

Voter suppression laws are on the rise. But Smithies are fighting back, working to expand political participation by eliminating ballot restrictions and empowering disenfranchised voters.

Certified Financial Planner Ka’Neda Bullock ’06 is spreading the word about the benefits of money management, teaching young people and underserved groups the value of investing.