BY Tzivia Gover
Patricia Lee Lewis ’70 looks out at her hillside retreat, a place of creativity for hundreds of writers over the years. Photographs by Mark Ostow

Standing on the patio of a guesthouse in Puerto Rico where 17 writers have gathered for the week, Patricia Lee Lewis ’70 taps a small brass bowl. Gentle ringing tones alert the group that the writing session is about to begin. For tonight’s exercise, each student will blindly select a crayon from a bowl and let its color inspire a poem or story. “I’m going to hold these crayons over my head so you can’t cheat,” Lewis says in a playful voice distinguished by the Texas accent of her youth. With her pixie-short hair tousled from a sun-bleached day and wearing a flowing tunic, white slacks and sandals, Lewis, 82, is clearly in her element, instructing the writers—all women, mostly in their 50s to 80s—to consider their crayon color and respond to it, letting the words come without judgment or criticism.

For Lewis, the founder of Patchwork Farm Retreat in the hills of western Massachusetts and the author of two poetry books, leading writing groups is not a side hustle to her own writing; rather, helping other writers find their own inspiration is central to her mission. “My devotion really is to writers,” she says. That spirit comes through when, 20 minutes later, Lewis leans forward in her chair to listen intently as each woman reads aloud what she’s written. She requests the same attention from the group, and then prompts the listeners to respond to the reading. “What’s working, what do you remember?” she asks.

This sense of acceptance and encouragement has marked her success as a writing coach. Lewis estimates that she has taught 700 students, led over 70 international retreats and mentored dozens of writers, some of whom have started workshop businesses of their own. But what’s most notable about her success is the way her students return year after year, developing friendships with their teacher and forming lasting ties with one another.

“If I had a signboard it would read, ‘Will work for international writing retreats,’” says Kathleen Henry, a Congregational minister from Rhode Island who continues working at age 76, in part to fund the 24 retreats she’s taken with Lewis since 2002. Lewis’ workshops are filled with people like Henry, who literally follow her around the world to locations as varied as Ireland, Mexico, Guatemala, Scotland, Wales and Zimbabwe. “Patricia has a large and nearly palpable spirit that is braided into everything she does,” observes novelist Jacqueline Sheehan, who has been writing with Lewis for 19 years. “She can hold so many personal relationships that she gives attention to,” Sheehan adds. “That is the opposite of most writers; we hunker down in our chairs.”

The bond between Lewis and her students has been particularly poignant in the past year. After Lewis broke three ribs falling in her home last winter, one of her nearby students, Phyllis Beck Katz, heard the news and set out to bring lunch to her teacher. When Katz’s Prius wouldn’t make it through the snow and ice covering the steep, half-mile driveway to Lewis’ home, Katz, who is 83 herself, walked up the hill to deliver the meal. “I’m just so fond of her,” says the poet and retired classics scholar (her daughter, Laura Katz, is a biological sciences professor at Smith). “With other teachers it’s ‘us and them.’ It’s really nice to be with someone who’s helping you become better.”

Then in March, while self-quarantining after possible exposure to the novel coronavirus, Lewis was eager to walk the trails on her 103-acre property but didn’t want to risk it alone. A student in eastern Massachusetts offered to be a virtual companion, monitoring Lewis’ walk via text messages. “That gave me great comfort,” Lewis says.

Isolation had never before been an issue for Lewis, who, until the COVID-19 pandemic, rented out suites and studio space on her property to writers and artists on retreat. But as the pandemic closed in and the world outside began shutting down, things grew quiet at secluded Patchwork Farm. Nearly everything on her schedule was canceled, including her plan to attend in person her 50th Reunion at Smith. In the quiet crater left behind, she found herself reconsidering her business, as well as her own writing, which now was shaping up in a new way.

Lewis has long been accustomed to life’s unexpected turns. She had dreamed of being a writer ever since she won a $2.50 prize for a story she wrote in fifth grade. She put that dream on hold, along with her education, when she became pregnant at 16, a cataclysmic event for a young woman in Texas in the mid-1950s. She married her son’s father and managed to finish high school by taking summer classes. She had a second child soon after, but her marriage didn’t last. Later, she married Charles Sackrey, who adopted her two boys, and together they had a daughter. Then, at age 27, Lewis enrolled part time at the University of Texas.

She continued working toward completing her education, attending four colleges in five and a half years without ever missing a semester, as she and the family moved from Austin to Ithaca, New York, and then to Northampton to follow Sackrey’s career as a professor of economics. She was 30 when she came to Smith, where Sackrey had obtained a teaching position. “Being a mom, caring for kids and trying to make deadlines wasn’t easy,” she says. She remembers studying French for class between driving back and forth to doctors with a sick child, and staking out vending machines on college campuses because she knew there’d be a place to sit and catch up on the work she couldn’t finish at home. But she was determined to study and succeed. “Once I finally got to pursue my education, I wasn’t going to slow down,” she says. Her grit paid off in 1970, when she graduated near the top of her class and was elected to Phi Beta Kappa. In 1999, she got an M.F.A. in creative writing from Vermont College of the Arts. 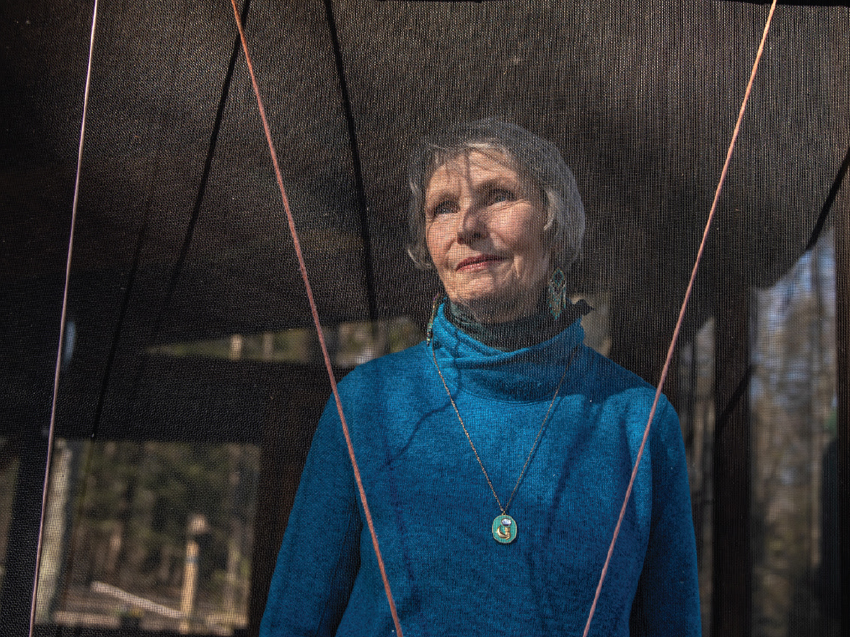 Several years after Lewis graduated from Smith, President Jill Ker Conway established the Ada Comstock Scholars program for nontraditional students. In 2000, Lewis attended the 25th-anniversary celebration of the Ada program and was surprised to find herself seated at the head table; that’s when she learned that proponents of the program had used Lewis’ academic success, along with that of other older, married students, to justify funding for the program. “Part of the impetus for Ada Comstock was so women like Lewis, who were mothers, could attend part time,” says Eleanor Rothman, now retired, the longtime director of the Ada program.

Lewis had been a trailblazer without knowing it. She calls herself “a natural feminist” whose personal experience as a young working mother, along with her passion for equality and justice, fueled her commitment to social activism. During her years at Smith, where she majored in anthropology, she started her career as an advocate for women, civil rights and the arts. She helped found the Valley Women’s Center in Northampton and Everywoman’s Center at the University of Massachusetts Amherst. She went on to serve on Massachusetts Governor Michael Dukakis’ Commission on the Status of Women, and she worked for Congressman John Olver as director of economic development.

In the 1980s, Lewis was serving as county commissioner for Hampshire County and working as the executive director of the Hilltown Community Development Corporation when a friend asked her to join a writers group. Lewis said yes before considering how she’d fit it into her schedule. But the weekly workshop at the home of the late Pat Schneider, founder of Amherst Writers and Artists, became a highlight in her week and gave her a new direction.

Schneider’s groups— legendary among Pioneer Valley writers— employed guidelines that prioritized confidentiality and allowed only positive feedback. Another requirement, which proved pivotal for Lewis, was that all work be treated as fiction. There, Lewis wrote a story based on her older son’s suicide at age 20. After all the others shared their work, Lewis, whose hands were trembling, took her turn. “I cried all the way through the piece,” she recalls. When she was done, Schneider turned to the group and simply asked them to comment on the writing.

It was that matter-of-fact focus on the writing as fiction that allowed Lewis to keep writing about what was most difficult. Eventually, her poems about being a teen mother and losing her son became the subject of her collection A Kind of Yellow, which won a Writer’s Digest Self-Published Poetry Book Award; the title poem was nominated for a Pushcart Prize.

She credits her accomplishments as a writer and teacher to Schneider’s guidelines. Now, at the start of her own workshops, Lewis requires students to agree to follow those same guidelines. “Patricia establishes that [the writing group] is a place where I don’t have to take care of anyone else, and I can write absolutely anything,” Sheehan says. “I admire that.”

Lewis’ own natural charisma— she’s a preacher’s daughter, after all—is an important aspect of her leadership. She bases her writing prompts and techniques on her steadfast belief in intuition and the creativity of the unconscious mind.

Her trust in intuition has guided her own life as well. Just as her career path took a radical turn toward writing when she trusted her gut and said yes to joining a writing workshop some 30 years ago, now she is opening herself to whatever comes next.

This summer she sold her beloved Patchwork Farm, part of a plan to downsize and simplify that had been in motion even before the pandemic hit earlier this year. Months of stalled international travel and social distancing have forced her to rethink nearly every aspect of her life and business. For now, she has rented a condominium in downtown Northampton, at the edge of the Smith College campus, to try city living for a while.

With so much change and uncertainty, she’s sure of one thing: Once the moving boxes are unpacked, it will be time to turn to her own writing. She’s 600 pages into a novel set on a ranch in Texas in 1938 about a woman with scant education and a big heart who stands up to inequality, racism and sexism. “My goal is to finish that book,” she says. “That’s my resurrection as a writer.”

Tzivia Gover, author of The Mindful Way to a Good Night’s Sleep, among other books, teaches workshops on dreams and writing. She has attended and helped lead several of Patricia Lee Lewis’ workshops. She writes frequently for the SAQ.

"Psychology professors were very supportive of students, creating a natural pull to the major." https://t.co/d0jQWMhYBn