Rosie Poku ’22 views scholarly research as a chance to “fill in gaps” in the fields of comparative literature and Africana studies. Specifically, she’s interested in bringing “a more diasporic” approach to those fields, one “that’s not just focused on the United States.”

Earlier this month, Poku had a chance to share her research at the American Comparative Literature Association’s undergraduate seminar.

Her paper, “The New Negro, Negrismo, and Négritude: Examining Articulations of Black Womanhood in 20th-Century Afro-Diasporic Literary Movements,” grew out of her work as a Mellon Mays Undergraduate Fellow at Smith. Funded by the Andrew W. Mellon Foundation, the program provides mentoring, summer research stipends and and other support to promising Smith sophomores, with the ultimate goal of increasing diversity in the ranks of academia.

“I was the faculty coordinator of Mellon Mays at the time and Rosie, who was a first-year student, had heard about the program,” Fulton says. “She sent me a really lovely email, wondering if we could talk. We ended up having a fantastic conversation!”

Since then, Poku has taken French classes with Fulton, and they talk frequently about their shared interest in the Francophone Caribbean and Poku’s research on Black literary movements.

Here’s what the two had to say in a recent Zoom conversation.

What was it like to present a paper at a national conference?

Poku: “It was really fun! I presented at the undergraduate seminar, and it was nice to connect. We’re all still sharing our bibliographies. I especially liked the questions and answers at the end of my presentation. I like being able to talk to people about my research—but I always thought I’d have to wait until becoming a professor to do that.”

Professor Fulton, what advice did you give Rosie about her presentation?

Fulton: “Rosie is pretty amazing, so I didn’t have to do much. I just offered to listen to a run-through. The Mellon Mays program is focused on getting students comfortable with presenting their work, and she’d had a chance to present her topic a few times in various formats. I told Rosie after the [comparative literature] conference how much I loved hearing her present in a longer format—a full 20 minutes. And then to have an audience that really appreciated all of the dimensions of her work was just wonderful.” 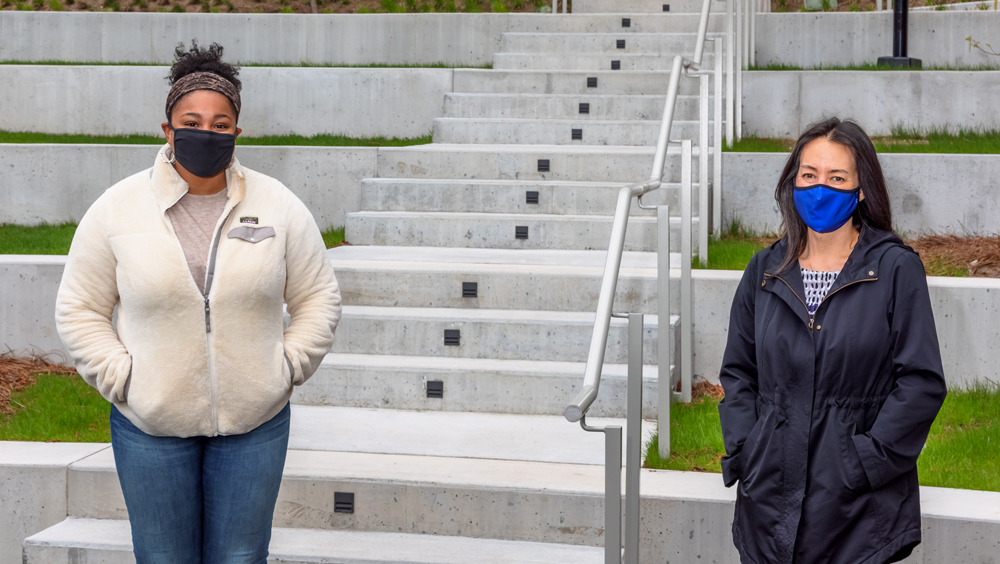 What sparked your interest in the literary movements you’ve been studying?

Poku: “I’d been taking Spanish classes since I was little and had learned about the Negrismo movement when I was in high school. I saw that it looked similar to the Harlem Renaissance and the Négritude movements. When I came to Smith, I wanted to learn French because of my interest in the literature of the Francophone Caribbean, and now I am able to actually read the original texts from all three of these literary movements.”

What have you discovered about the portrayals of Black women?

Poku: “In the Harlem Renaissance, Négritude and Negrismo movements, there are radical literary expressions of Blackness. Within that, I found a trope that links Black women to the land and the African continent. I argue that that can be powerful, but it also renders Black women voiceless. It doesn’t allow them to be their own actors.

“Then, in the 1970s—post-Civil Rights, post-Senegalese independence and post-Cuban Revolution—Black women are responding and including a gender perspective. They are looking back to the 1920s and 1930s and reclaiming Black women’s voices as actors and agents. When I proposed my Mellon research project in the spring of 2020, I didn’t have the 1970s piece. I was able to find those connections through a lot of work and a lot of hours.”

Fulton: “I think of Rosie as an architect. You can see the foundations built since her first year, and they all connect beautifully. The Mellon program is really good in that way. It helps reveal the various phases one might go through to get to a certain point in a research project. For listeners [at the conference], there was a richness to Rosie’s presentation. The house of her research was carefully constructed and coherent.”

What did you learn from the experience?

Poku: “When I presented to the Mellon group, it was all students of color. At the American Comparative Literature Association conference, I was one of only two Black women presenting. The experience of being there gave me confidence and also made me remember how important a place like Smith is—and how important the Mellon program is. Going forward, I’ll want to find communities that look like me and do the work I do. There are Black scholars out there. There are hundreds in the Mellon program, and I’ll be able to keep those connections.”

Jamie Macbeth, assistant professor of computer science, is studying how artificial intelligence can be used to improve decision-making.

Yanna Lambrinidou ’89—this year’s Lakes Writer-in-Residence at Smith—believes that activism, teaching, and learning are related endeavors that one cannot, and should not, accomplish alone.