Tree to Table: An American Elm in the New Neilson

BY Linnea Duley ’16
Craftsman Sam French on a bench he built for the new Neilson. Photograph by Time Bandit Photography

Sustainability has been at the forefront of the new Neilson Library since its inception. With an eye toward utilizing natural materials such as stone, wood and glass in the new building as much as possible, locally sourced products have been implemented in many ways throughout construction.

So when it became clear that underground utilities work near Neilson had caused a large American elm tree to become a safety risk, requiring its removal, every effort was made to honor the tree that had watched over Smith’s campus for 125 years. 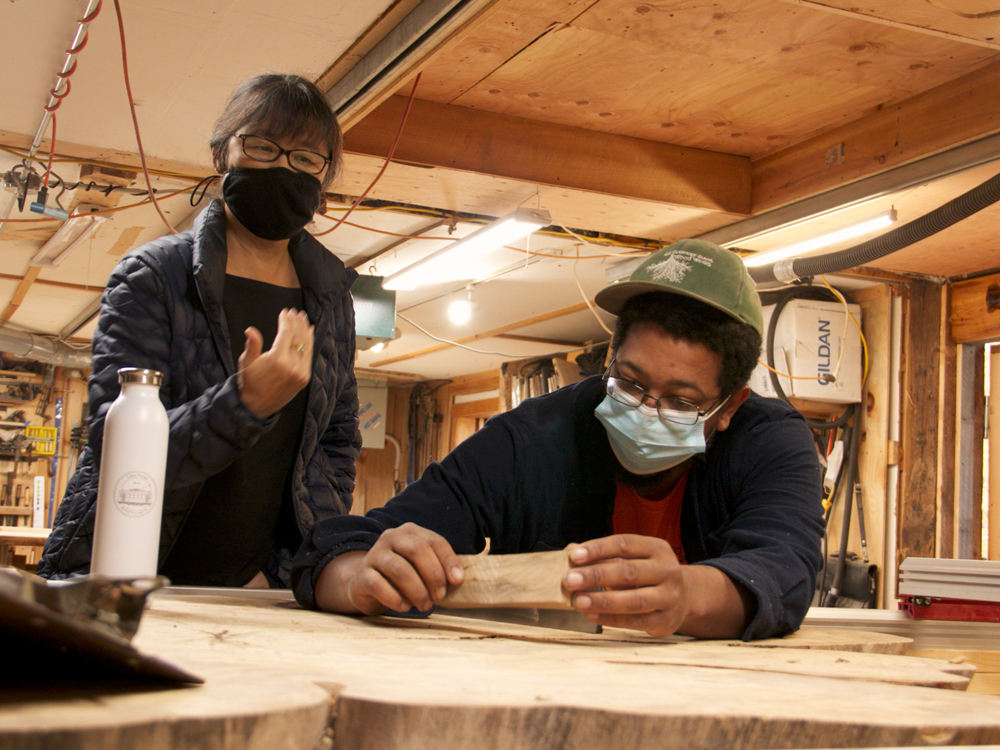 Eager to make the best use of the tree, the college turned to Sam French, local craftsman and owner of Gill Country Clear Woodworks in Gill, Massachusetts, to turn the felled elm into furniture to be housed in the new library. French jumped at the opportunity.

“I learned woodworking from my dad when I was about 12 years old,” says French, whose shop is located on property his family has owned for more than 100 years. A commitment to land conservation and sustainability, instilled in him by his father, is deeply rooted in his business practices. “The idea of turning this tree into pieces that will continue to be used struck a very deep chord with me,” he adds.

Although the tree was taken down in June 2017, the slabs were not delivered to French until three years later, in the summer of 2020. During the fall of that year, Lin and consulting architect Bill Bialosky visited French’s workshop—masked, of course—to discuss how Lin’s designs could be combined with the structural and functional needs of each individual piece.

“Maya was really awesome to work with,” French recalls, noting that she helped him imagine new concepts he never would have conjured up, such as tables with more than the traditional four legs. “It was a really special process to be a part of. She has a fantastic eye,” he says. 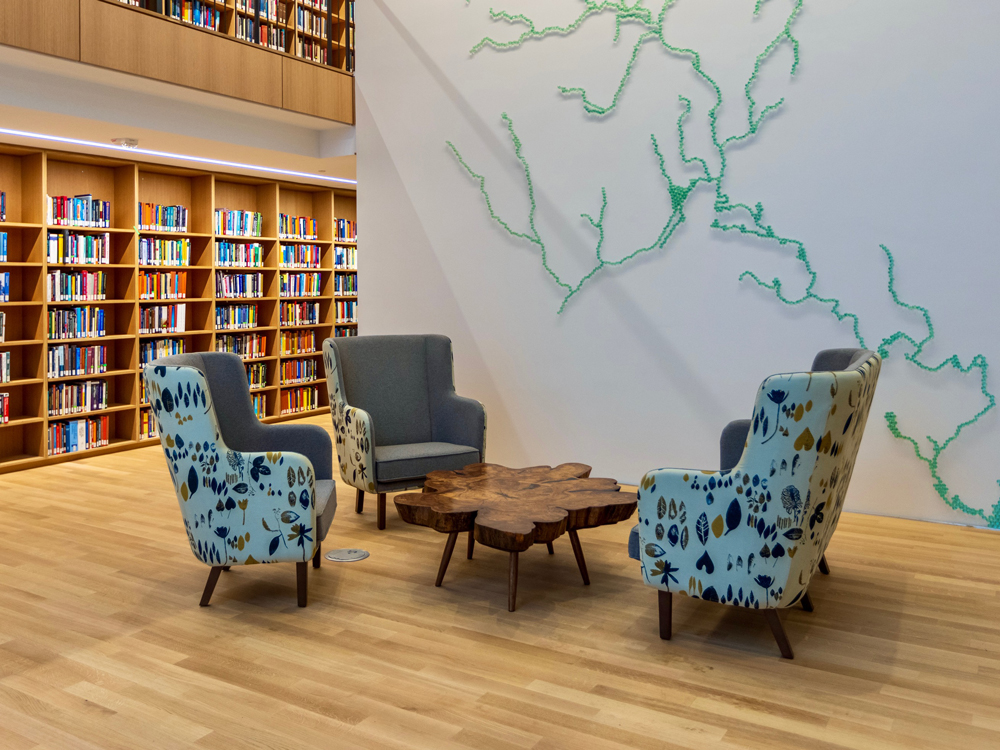 Each piece is live edge—meaning the natural shapes and imperfections of the wood remain intact, with only the bark removed—and one of a kind.

A project truly based in the local community, the reading tables feature metal legs fabricated by Bruce Golinski at Northfield Fab and Machine in Northfield, Massachusetts, and painted at Doug’s Auto Body in Gill. The legs of the benches and coffee tables were hand-turned by Pat Moriarty of the Conway Chair Company in Shelburne Falls, Massachusetts.

All nine pieces of elm furniture were recently moved from French’s shop to their new home in Neilson Library. Several were so large they had to be lifted through a third-story window with a crane. They are being placed throughout the building to be used in different ways.

For French, finishing the project was immensely gratifying. “There’s a full-circle connection for me in getting to do pieces like this,” he says. His mother, Emily Samuels ’71, went to Smith—as did Lin’s—and she first met Richard French, who is now her husband, on the Smith campus. How is Sam French feeling about contributing something so meaningful to a place with so much history? “I’m ecstatic,” he adds with an audible smile.

More information on the construction of the new Neilson Library, which will be open to faculty, staff and students in Smith’s COVID screening program on Monday, March 29, can be found online. Due to the pandemic, the library is not yet open to the public; that date will be announced once it’s available.

A New Home for Past Presidents

Ten portraits of Smith’s former presidents—long housed near the main staircase in College Hall—will be moved to a place of prominence in the newly reimagined Neilson Library later this summer.

Prof. Carrie Baker on the efforts to increase access to birth control through the #FreethePill campaign. https://t.co/CjNp78sq8M