News & Events for the Smith College Community
Campus Life May 15, 2020

Ketty Munyenyembe ’20: A Passion for Research

Just a few years ago, Ketty Munyenyembe ’20 was well on her way to a career in international studies. But after transferring to Smith, she discovered a passion for scientific research. Now she’s heading to a Ph.D. program at Yale, where she’ll investigate the evolution of microbial pathogens—including COVID-19.

Originally from Zambia, Munyenyembe came to the United States in 2015 to help her pastor’s nephew and his wife care for their children. With the family’s support, Munyenyembe (a former climate ambassador for UNICEF Zambia and youth ambassador for the Africa Alliance YMCAs) enrolled at Norwalk Community College in Connecticut; she then earned a full scholarship that allowed her to transfer to Smith as an Ada Comstock Scholar.

When she applied to Smith, Munyenyembe planned to major in government—but her interests soon turned to biology. An invitation to join Professor Laura Katz’s lab, followed by a McKinley Fellowship in Smith’s AEMES program, were transformative.

For Munyenyembe—who’d enjoyed science in high school but not explored it deeply—the laboratory experience was profound. “This was a second chance that life has given me to pursue something I’m passionate about,” she says.

She leapt at the opportunity. “My only goal in the lab was to learn what it meant to be in a research lab,” she says. “I’d never been—in fact, I didn’t even know how to use a pipette!”

But with support from Katz and research fellow Agnes Weiner, Munyenyembe started taking up projects, designing a robust—and brand new—protocol for staining shelled amoeba for use in DNA estimation.

It wasn’t long before she realized she had “fallen in love” with the open-endedness of research.

“It’s the idea of discovery!” Munyenyembe exclaims. “You’re reading things, coming up with questions, and then trying to find the answer. You have no idea what you’re going to find!”

After her first projects, Munyenyembe continued her work on amoebae, analyzing their genome structures using both molecular and bioinformatic tools. Last summer, she presented her research at the Society for Molecular Biology and Evolution in Manchester, United Kingdom. She hopes to continue her research this summer, with an eye toward publication. 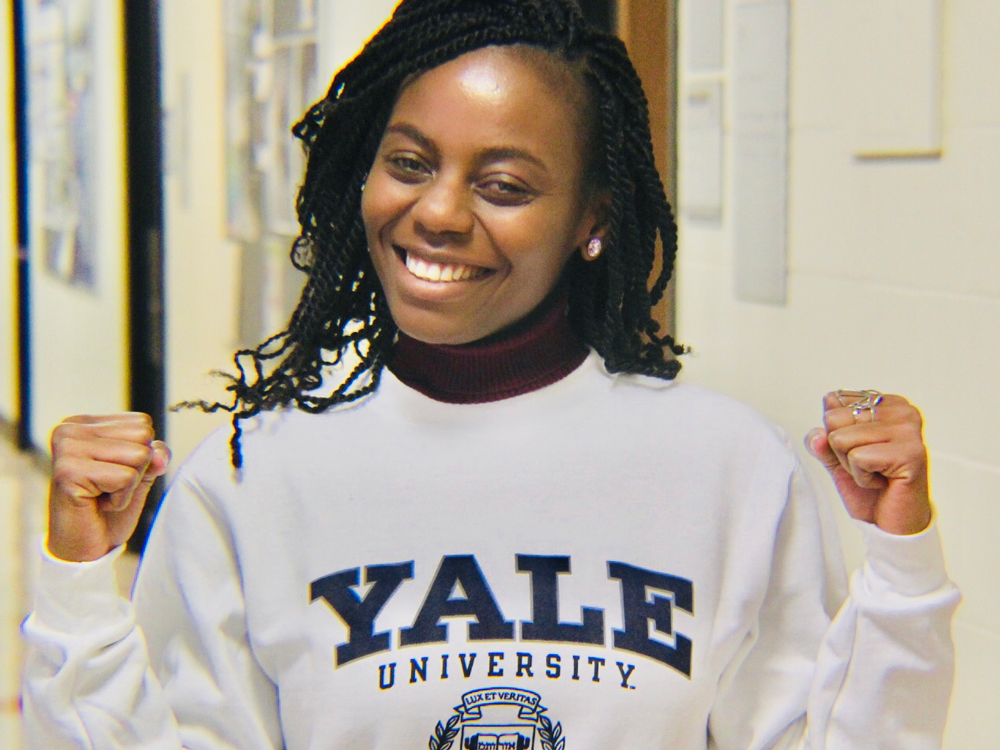 Munyenyembe was accepted into five doctoral programs, and ultimately chose Yale for its outstanding research and faculty.

Yale’s five-year program will give her a chance to be part of a team that’s studying the evolution of pathogens, including COVID-19. “I’m excited to jump in and get started,” Munyenyembe says. “I’m very interested in getting my hands into this.”

After Yale, Munyenyembe hopes to continue following her passion as a research scientist.

At the moment, though, her focus is on Smith. “This is a remarkable time,” she says. “I’m graduating from a prestigious college and heading to an Ivy League university—that’s something I never thought I’d be able to do. And I'm doing it because of the support of so many people through the years, and, most importantly, the mentorship of my guardians in Connecticut, who brought me to America,” she adds.

“Smith didn’t just give me a scholarship,” she adds. “It’s given me so much more. I’ve grown so much intellectually here. I’m glad that New Haven is so close. I can’t wait to come back and visit.”

Abby Perce ’24—one of 582 new students at Smith this fall—is pursuing her passion for medicine in remote classes and research. Learn more about her in the first of a series of profiles of new Smithies.

A Fair Shake in a Down Economy

For many members of the class of 2020, finding a job in the midst of a pandemic was difficult, if not impossible. To give new grads a boost, the Lazarus Center for Career Development partnered with the Office of Alumnae Relations and Development to offer $3,000 in Praxis funds for summer internships.

Scholarship awards, poetry honors and groundbreaking scientific research are among the recent accomplishments of Smith students, faculty, staff and alumnae.

RT @presmccartney: Ruth Bader Ginsburg was a hero. Let us remember her, as Chief Justice John Roberts wrote, as "a resolute champion of jus…

@Gail_Deady Alums should be receiving the link via email, so DM us if you haven't been getting those for some reason. You can also find the links in each story about the speakers and listed in full here: https://t.co/JWRcpgjide