This is Not a Drill

White women must use their privilege in support of Black liberation.

This year marks the 100th anniversary of the 19th Amendment, which guaranteed the right of some women to vote. We commemorate it in the midst of a national reckoning on racism and violence against Black people. This, of course, isn’t the first time we have witnessed a public lynching of Black lives, and specifically the lives of Black women. What’s different this time is that the carnage is being streamed in real time, invading your newsreels, phone screens, timelines and psyches.

Here’s the conundrum: 100 years ago Black women were told that the suffrage movement was not for them, that their womanhood did not matter. The movement’s backdrop against sexism could not be muddied by the uplift of Black women and Black men—deemed brutes and also three-fifths of a person. Black foremothers Ida B. Wells and Mary Church Terrell insisted on our place in the movement, in the march toward equality, while white women like Susan B. Anthony and Elizabeth Stanton told us to get to the back, if we dared. Here’s a present-day warning: This time, our voices won’t be drowned out.

There are many well-intentioned white allies out there. Thank you. But I also want to let you in on a well-known secret. Your good intentions are just as laborious—if not more—to us as being in spaces with overt racists. Why? Because here we are, yet again in the position to hold you and your babies in our bosom to be fed the truth. A truth that a small number of you have known for centuries. Get off of our breasts! We are nursing, nurturing and conducting healing for an entire community while maintaining a semblance of sanity.

To the white women reading this: As we march forward, know that this is not a drill. It is time for you to put your bodies, privilege and purses on the frontline of Black liberation. Don’t simply speak of being progressive while your individual action (racist-motivated calls to police, for instance, led a San Francisco official to propose the CAREN Act—Caution Against Racially Exploitative Non-Emergencies) and collective action (exemplified by the results of the 2016 presidential election, in which a majority of white women voted for Donald Trump) regress a multitude.

Vote in favor of Black liberation: locally, statewide and nationally. The dismantling of your privilege starts right at home with you. Unlearn. Relearn. Relinquish control. Redistribute power to be truly aligned with equality.

While this may sound threatening to your ears, acknowledge that a redistribution of power doesn’t seek to strip you of yours. Rather, it seeks to ensure an equal playing field for all. This means investing in Black-led organizations that are closest to the needs of the community and hence to the solution. It looks like advocating and sponsoring the well-deserved development and advancement of Black folks in your company and organization. It also means not co-opting our safe spaces. Rather, when you’re invited in, use the knowledge you gain from Black folks to redirect and check your colleagues in white-dominated networks.

Our suffrage as Black women is that as a people we have suffered beyond long-enough. What will you commit to today so that the next 100 years don’t mirror the last 400 years in this country?

Imani Missouri ’08 is the principal owner of Faith Forward LLC and the creator, host and producer of the Forward 40 (4tea) podcast, which highlights the experiences of 40 women of color on the rise in the nonprofit and social enterprise sectors. Her career spans experience in the nonprofit, community development and education sectors. She serves on the board of directors for DIFFvelopment and is a member of Smith’s Medal Committee and the Nominating Committee of the Alumnae Association of Smith College. 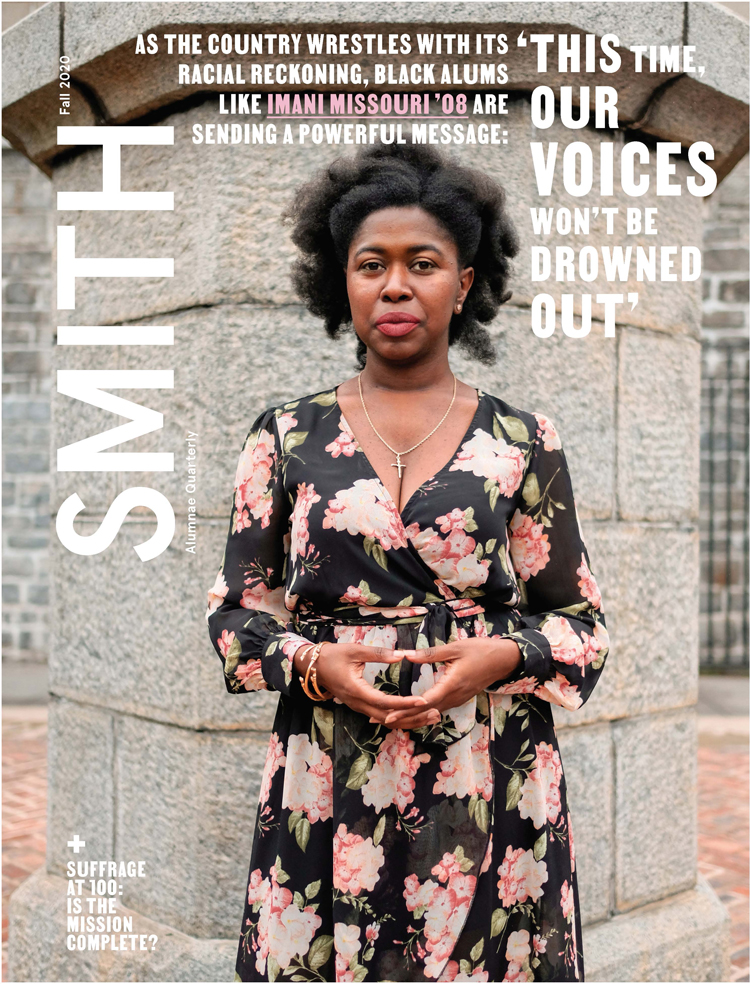