BY Jan McCoy Ebbets; Video by Jeffrey Baker
On a tranquil morning in mid-September, as players lobbed tennis balls across nearby courts and novice archers took aim at their archery targets, a large drill rig was making its first (very loud) impressions in the soil adjacent to Smith’s Field House for what would become a 1,000-foot-deep vertical borehole. The work marked the initial phase of a historic pilot project to install a geothermal heat exchange system.

“This is our first geothermal project on the Smith campus, and we’re very excited,” said Dano Weisbord, executive director of sustainability and campus planning, noting the project’s contribution to Smith’s commitment to reaching carbon neutrality by 2030.

Geothermal technology works by harnessing the stable temperatures found below the Earth’s surface and is considered a renewable resource by the U.S. Environmental Protection Agency. At about 1,000 feet down, the temperature is typically 54 degrees Fahrenheit. A heat pump will be installed in the basement of the Field House to convert this lower temperature energy source into the warmer temperatures we are accustomed to inside buildings.

According to Denise McKahn, associate professor of engineering and faculty director of the Center for the Environment, Ecological Design and Sustainability, an instrumented system at 1,000 feet has never been installed in the region. “A handful of instrumented sites have deployed this advanced system, the closest being in New Jersey,” she said.

The actual drilling took about two weeks and resulted in a test well that is serving as a demonstration project for the potential use of geothermal energy to offset Smith's carbon emissions. A pipe will be placed inside this test well, located at Smith’s Field House, and eventually provide the energy the building needs for heating and cooling throughout the year. “This shift to ground source geothermal energy for heating and cooling is just a part of [the college’s] hybrid energy approach,” McKahn said.

Once the drilling was complete, the next phase of the project focused on advancing an understanding of the ground at depths that are rarely observed. This research involved feeding a camera down the borehole to obtain a full picture of the rock and sediments below, taking water and gas samples, and assessing how easy it is to transfer energy in and out of the rocks. After this testing, a ground source geothermal heat exchange system—“a fancy pipe” —was installed.

“The test borehole is really an opportunity for us to understand the geophysical conditions below the ground,” McKahn says. “We will use this data to size the proposed geothermal system capable of heating and cooling the whole campus.”

Nearly every day during the drilling phase, a small group of faculty and students gathered on the athletic fields to observe the process and conduct research. 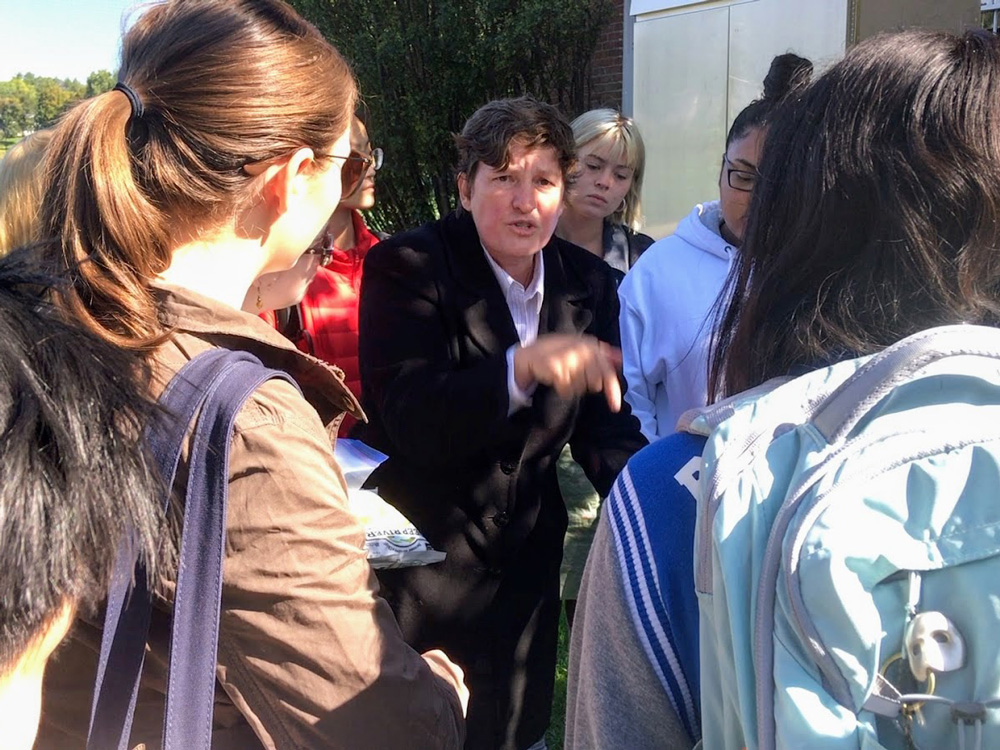 For their part, students had the chance to study geothermal systems on site and, perhaps, unearth some surprises. “For instance,” McKahn said, “we have discovered very interesting geophysical conditions that have opened up lines of inquiry with geosciences faculty.”

Bob Newton, professor of geosciences, said the test geothermal well has revealed new information about what’s 1,000 feet below the surface. And not surprisingly, there is already a lot of data to work with.

“A surprise to me was how deep the sedimentary rocks went,” Newton said. “I had made the prediction that we’d hit underlying granite at a depth of 840 feet based on other wells in the area. But we went to 1,010 feet and we didn’t hit the granite, so the granite is much deeper than I expected.”

Then there is the aspect of the groundwater, its chemistry, and how much water is actually in the well. “My ground water class did a pumping test and they looked at the data,” Newton said. “Soon they’ll do an analysis of the data. In fact, we have lots of water samples and will be doing a complete geochemical analysis.”

Newton says the geothermal project has provided students with a deep well—literally—of research possibilities that will keep them busy for quite a while. “From a big picture perspective, this potentially could yield very valuable information that we would never have had otherwise,” he said.

Audrey Cho ’24 is one of 55 college students selected nationally this year from more than 380 applicants for a prestigious Udall Undergraduate Scholarship.

Smith is acting in the face of the climate crisis. In mid-May, the college will break ground on a bold new infrastructure project—one that will allow Smith to realize its pledge of becoming carbon neutral by 2030.

In a virtual talk on Thursday, March 3, at 4:15 p.m., landscape curator John Berryhill will share examples of how staff and students are using the Smith botanic garden for social justice work.

RT @SBaumgartnerPgh: #ClimateNeutrality should not be end goal. Must read for all in and around climate action in Higher Ed. Paper by @Ale…