“I have always had a huge interest in foreign languages and cultures,” says Ashley Lindskold ’23, who in the past has studied French, Spanish and Chinese.

Lindskold, who is taking a Chinese class this semester at Smith, will be translating the poem 刹那 by 周梦蝶 for the college’s first annual Poetry Translation Slam, which will be held on Wednesday, Dec. 4, at 7 p.m. at the Poetry Center in Wright Hall.

Lindskold knows the task will be challenging but, she says, “I’m hoping my translation skills and Chinese ability improve because of this.”

And, she says, “the poem, from what I’ve read and understood, is very beautiful.”

The slam, co-sponsored by the Poetry Center and the Lewis Global Studies Center, features three poems in Chinese, Italian and Spanish that students can choose to translate by the deadline of Wednesday, Nov. 20. Poems are available online at either of the center’s websites.

Organizers describe the event as having all the best characteristics of a classic poetry slam: it will be joyful, interactive—even a bit rowdy.

Poetry Center Director Matt Donovan says the inspiration for a Translation Slam was sparked by a conversation with Michelle Bolduc ’89—now a professor of translation studies at the University of Exeter in the United Kingdom—at Smith’s reunion weekend last year. Donovan says he was “immediately intrigued by the possibilities of such an event, which seemed to afford opportunities to open up discussions around translation in a novel way.”

Rosetta Cohen, Myra M. Sampson Professor of Education and Child Study and faculty director of the Lewis Global Studies Center, views the slam as “a great way to bring our two centers together,” as well as engage the college’s translation concentrators and language departments. She hopes “students will take away from the event a sense of the pleasures of doing translation, and also an appreciation for its challenges.”

Jennifer Blackburn, administrative assistant at the Poetry Center, emphasizes that the judges “aren't looking for expertise or perfection.” In fact, she says, “many translators of poetry come to the idea of translation before they are well trained in the poem's original language and develop greater fluency and grasp of nuance over time and through practice.” 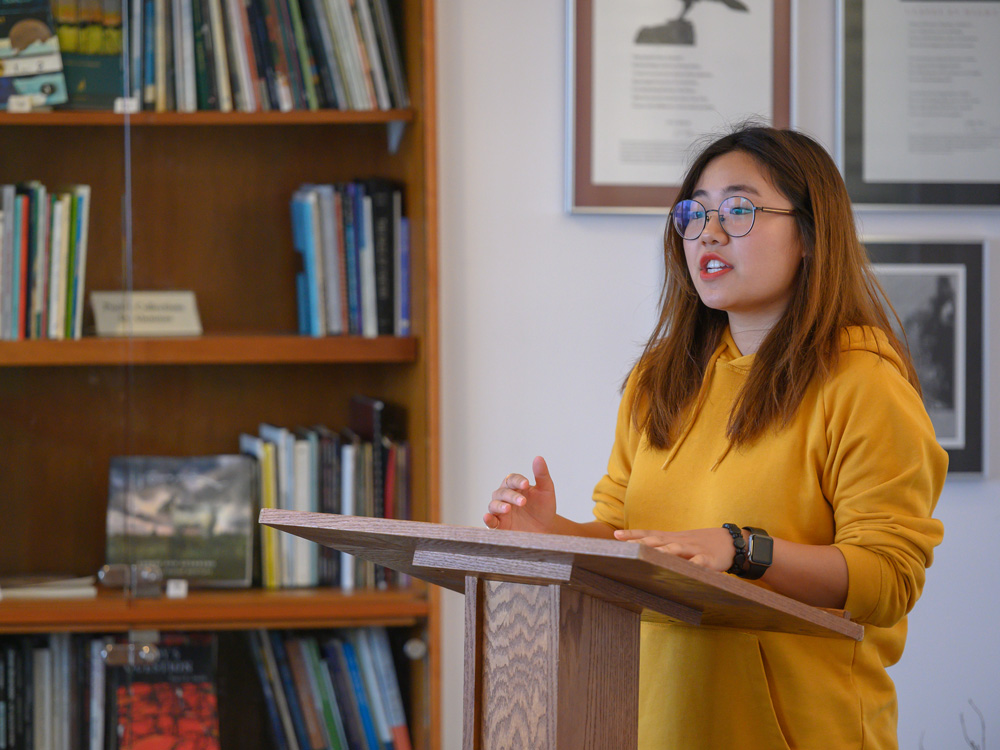 Organizers plan on repeating the event annually with new languages: Next year’s slam will feature Arabic, French, Portuguese and Russian, while the following year will feature poems in German, Hebrew, Japanese and Korean.

Students who would like to participate in this year’s Poetry Translation Slam should submit their translated poems via email to Rosetta Cohen, rcohen@smith.edu, or Jennifer Blackburn, jblackbu@smith.edu.

The #DiggingTheCollections contest invited students to research a book, image, set of papers or another item of interest from Smith's remarkable Special Collections and post their findings on social media.

Data science awards, published essays and career promotions are among the recent accomplishments of Smith students, faculty, staff and alumnae. Read about them in the latest People News column.