When you work in far-flung corners of the world as a Foreign Service Officer—as I and four of my globetrotting, food-loving friends do—you live for regular meetups to escape and reconnect.

On an unseasonably frigid April afternoon in D.C., I found our next reunion destination when I clicked on an Airbnb listing for Julia McWilliams Child ’34’s famed Provence cottage, La Pitchoune, available for a week the following August. The five of us all hero-worshipped the wonderfully tall, slightly awkward icon, who had inspired everyone from Michelin-starred chefsto noncooks around the world. We loved her for marrying Paul, a fellow Foreign Service Officer who clearly adored her, and for never apologizing for being uniquely, beautifully herself. The chance to cook in her kitchen, and perhaps pick up a little of the Julia aura, was too good to pass up. Terrorist attacks in nearby Nice barely three weeks before we landed only strengthened our will to reconnect. 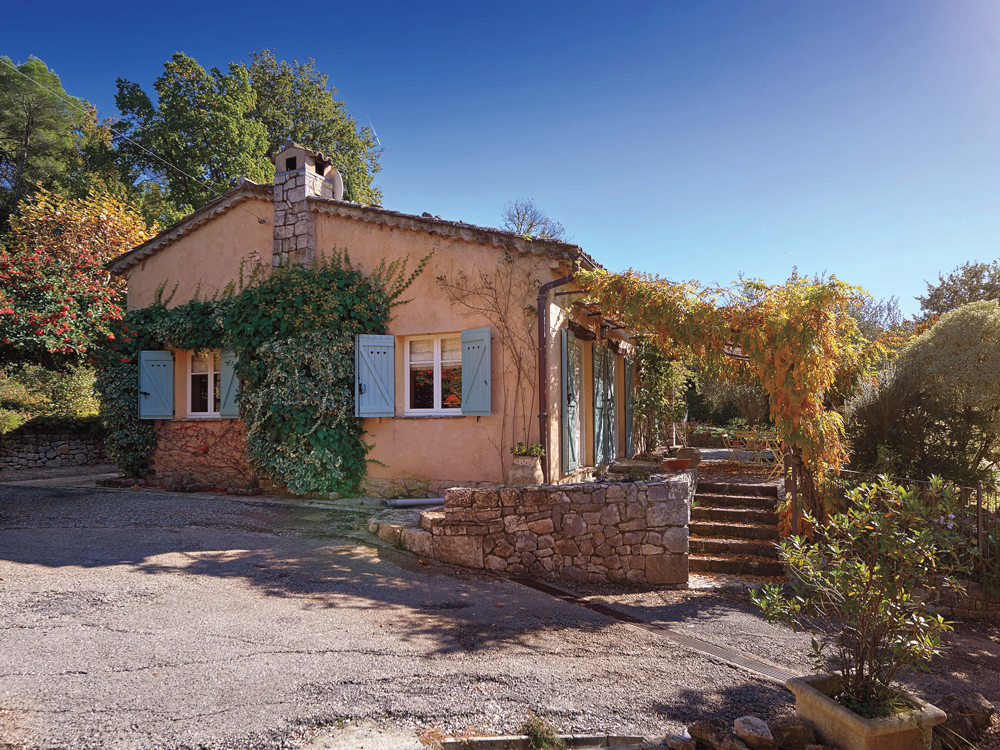 La Pitchoune—“the little one” in Provençal dialect, and shortened by the Childs to “La Peetch”—had gone on the market the year before, about 11 years after Julia’s death. When the first buyer backed out (following terrorists attacks in Paris), a fellow Smithie, Makenna Held Johnston ’07, took a gamble and bought it, inspired by her love of sharing good food. As she put it—in a spirit Julia would have applauded—“You have to be willing to see the magic when it’s presented to you.”

La Peetch takes full advantage of its setting. A narrow road leads visitors to a twisty, unpaved driveway lined with trees and horse pastures. From there, guests are greeted by a bower of bright pink flowers winding around a peach stucco cottage. Inside, the bedrooms and living room have tall doors that catch the summer breeze and open onto a stone veranda overlooking the rolling Provençal countryside. 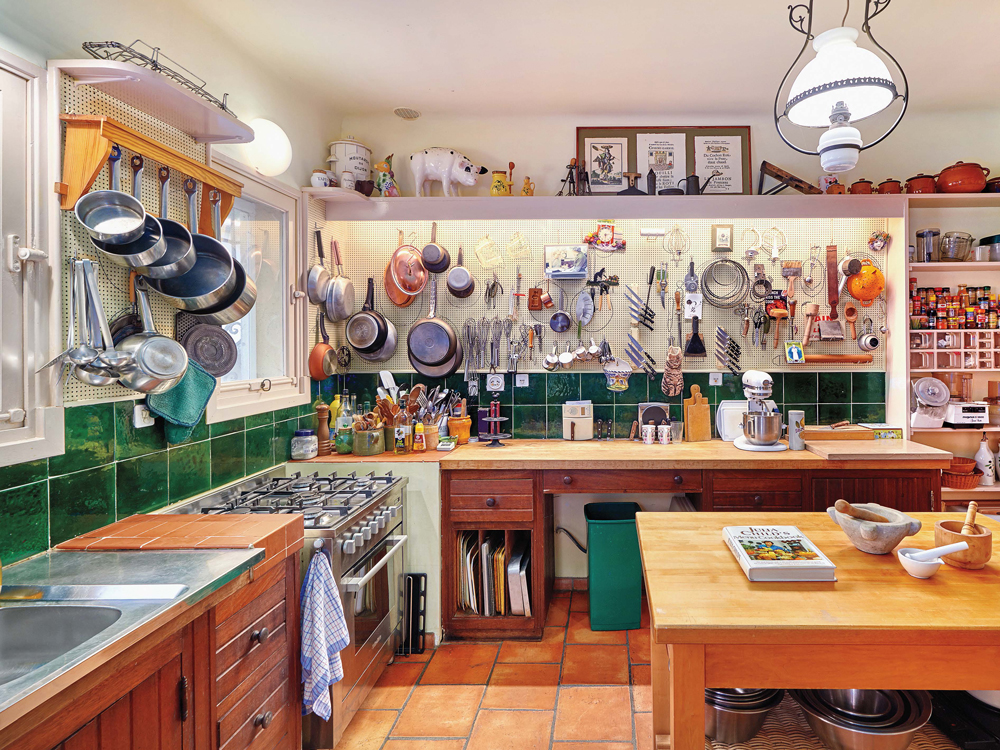 Julia Child’s cottage kitchen in Provence has changed little since she tested recipes there for her cookbooks. Photograph by Sotheby’s

Fittingly, the main entrance is through the kitchen. A sense of order and calm mingles with a lingering perfume of garlic worked into the butcher block over nearly 50 years. It is clearly a retreat, but a very well-executed one, with a sense of battle-station readiness lurking beneath the relaxed Mediterranean vibe. This hideaway is where Julia and Simone (Simca) Beck birthed Mastering the Art of French Cooking, Part II.

The appliances are updated, but the old-fashioned red embossed labels on pantry drawers still announce “AIL,” “ESCHALOTES” and other staples. Paul’s books bear address labels for their house in Cambridge, Mass. The guest book is neatly typed, with hand-drawn diagrams of the property, furnace and hot-water system—a reminder that the house was run by, respectively, the architect of Lord Mountbatten’s war rooms and a CIA documents officer.

Cooking in that small but efficient kitchen was pure joy. Every item, down to the egg poachers, is well-used and has its proper place. Next to the five-burner gas stove, pots and pans hang on a pegboard—more or less within the outlines Paul once drew. Knives line up like soldiers along the back of the giant butcher-block countertop calibrated to Julia’s height. A white KitchenAid mixer rests on a marble plank for pastry dough and under a wall of tart rings and pie crimpers. 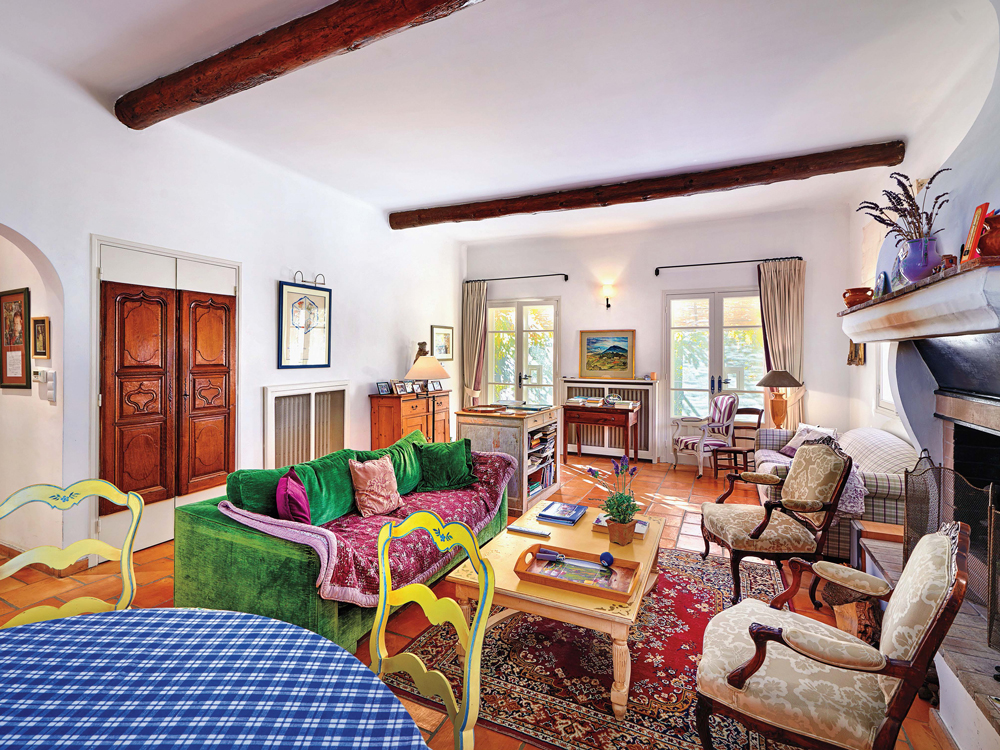 This marriage of logic and love enabled five friends to, at once, slice potatoes for the pommes dauphinoise, pop an apple and lemon tart into one of the three ovens, top up endless glasses of rosé—and most important, enjoy being together in that cozy and historic space, teasing each other and moaning about our next overseas postings.

With each peak-season tomato I sliced, or batch of sunny aioli that I made, I felt power infusing my hands and an encouraging, warbly voiced presence cheering me on. Not everything we made was perfect but, as Julia Child used to reassure her viewers, food is about delighting, comforting and transforming; the result is delicious and loved, even if it is imperfect. Every meal we cooked, from our first dinner of roast chicken, those decadent pommes dauphinoiseand spicy, smokymutabal to a “dinner of desserts” on our last night, was bursting with affection, conviviality and generosity. Through chopping, sautéing, baking and eating in this retreat from our demanding careers, an increasingly chaotic world and our own insecurities, we captured a little magic, renewed friendships and lived in the moment.

And, of course, we toasted Julia.

After an award-winning State Department career in Haiti, Israel, France, Iraq and Washington, D.C., Shaila Manyam ’94 is currently on an Arabic language fellowship.

This story appears in the Winter 2016-17 issue of theSmith Alumnae Quarterly.

Provence of the Imagination

What she overlooked on a youthful trip to France leads Helen Horowitz to consider how one hilly region has come to be adored by travelers and food lovers the world over.

A Destination to Desire

Julia Child ’34 and her TV show sold America on the lure of Provence, a region of outdoor markets, heady aromas, rustic ambiance and inspiring foods

Kitchens Made for Conversation

In 1989, architect Pamela Heyne (Pamela Heyne Widell ’62) interviewed Julia Child ’34 about her three kitchens: at her home in Cambridge, MA (now housed in the Smithsonian Institution), her television studio and her second home in Provence. Heyne used that conversation as a starting point for In Julia’s Kitchen: Practical and Convivial Kitchen Design Inspired by Julia Child (ForeEdge, 2016) with photographer Jim Scherer. The book examines current trends in kitchen design, including some of Heyne’s own designs. She writes that Child advocated comfy kitchens where “conversation is as important as cuisine.”