Cacao In The Greenhouse

The small group of student interns filed into the potting room, a cool space on a warm Lyman Conservatory day, and arranged themselves around a white platter. A large slab of chocolate was waiting on a plate, glossy and inviting.

One by one, the students broke off pieces and began to eat them. In a moment, they would decide: Is this chocolate a success?

The treat was part of the answer to a question Smith College Botanic Garden staff and interns had been asking for over a year, ever since fruit began to ripen on a tree in the Lyman collection: Could Smithies take cacao pods and make their own sweets?

Reflecting on the effort, Tim Johnson, director of the botanic garden, put it this way: Chocolate, he says, was just “one of those stories that’s dying to be told.”

For an outside visitor, it can be surprising to discover just how much the Lyman Conservatory produces. Botanic garden staff grow guavas and bananas, coffee beans and cassava root, ginger and citrus. While most of the collection plays a role as a reference and teaching tool, staff have sampled Surinam cherries (tasted awful) and yuzu, which is made into a ceremonial tea in some cultures and made at least one person drunkenly woozy.

Given this variety, the conservatory’s South American cacao tree is not the rarest or most exotic specimen. As a teaching tool, though, the tree has the potential to tap into broad themes. Not only can cacao lead to conversations about the art, craft and business of the chocolate trade, but it can be a good starting point to talk about more pressing global challenges—climate change, deforestation, conservation—and thornier questions of historical trade inequities, cultural appropriation and marginalized communities.

“When we can take one of our trees and convert the product of that tree into one of the most beloved substances on earth, that, I think, starts to make the value of plants really clear to people,” says Johnson. 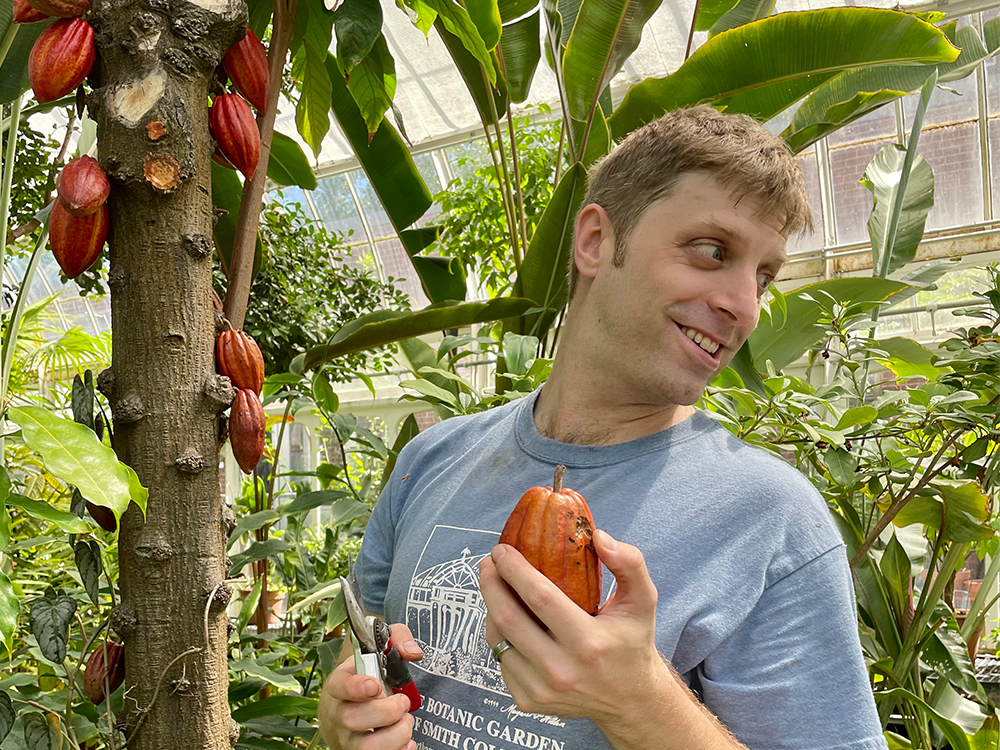 As he notes, the botanic garden staff are always looking for ways to amplify experiential learning, close knowledge gaps and do all that while building more awareness of, and appreciation for, plants.

“It's really easy to forget, I think, that when we look around us, we can fly across the ocean and we have computers in our pocket, but we can't do anything without plants,” Johnson says. “They're the foundation of absolutely everything. If it isn't made from plants, it was made with plants.”

In the cyclical nature of a place that’s been around for a century, Lyman Conservatory’s cacao tree has had its moments—it was once the star of a horticulture class—but fell out of favor for a little over a decade. With trees requiring a year to go from small flowers to mature fruit, growing cacao is also an exercise in patience. So when Smith students decided they were interested in the process last summer, the staff began planning this year’s harvest.

By July, students and staff were gathering 40 pods, a third of which had to be discarded for various reasons: too small, not mature enough, rotten or nibbled on by various small animals. 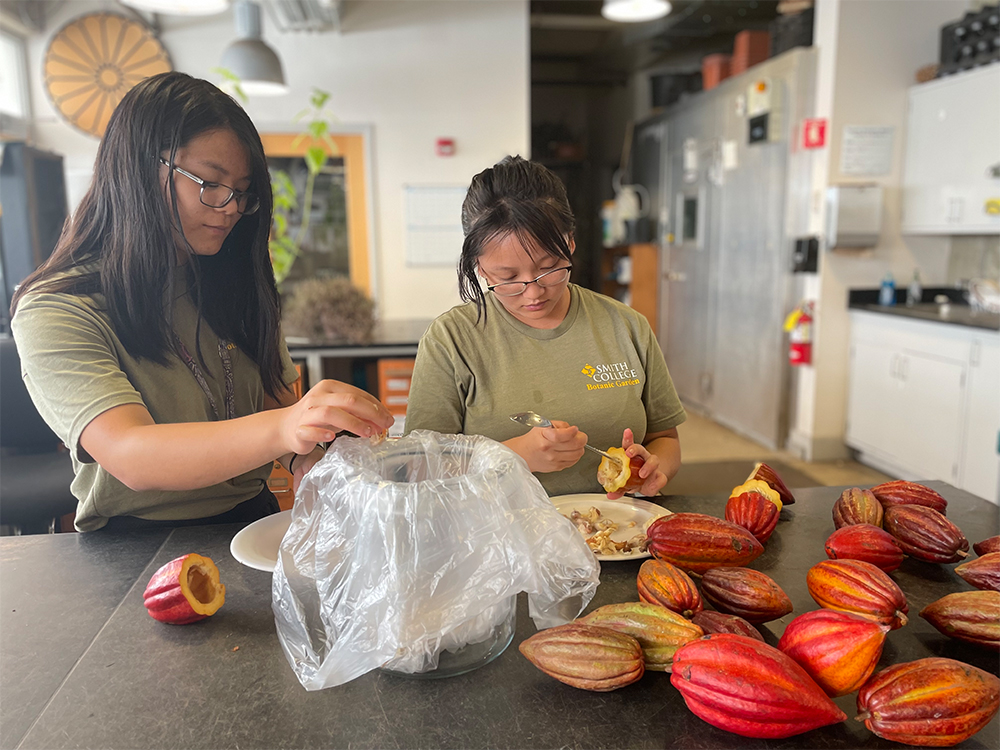 Cacao pods don’t start off looking much like their most well-known product. They are football-shaped, for one thing, with a rind the consistency of uncooked butternut squash. Open one and you’ll see stacked seeds, as though a corn cob is stuffed inside, surrounded by white pulp. As the pods mature, the outside turns a warm, pumpkin-yellow color. The white pulp inside begins to liquefy and the seeds start to sweeten.

Chocolate requires a huge volume of pods to properly ferment, a key part of the process. (In the world of chocolate, the Lyman harvest wouldn’t even count as “small batch.”) At a commercial scale, harvest time may last many weeks and involve various producers regularly bringing ripe pods to a consolidation center. The pulp and seeds would be loaded into cardboard boxes for the weeks-long fermentation process, which also begins to flavor what eventually will become cocoa nibs. 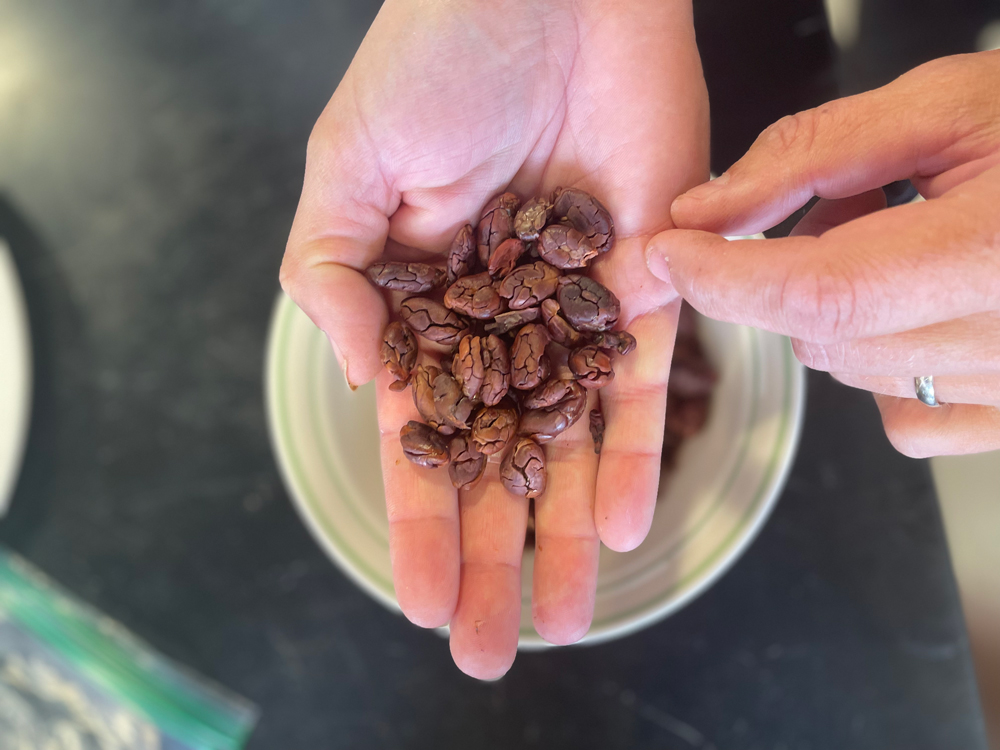 Cacao beans after being fermented, roasted, and shelled.

“It's this really delicate balance of applying heat and the right amount of heat, and you're trying to promote bacterial and fungal growth, but not foodborne pathogens,” notes Johnson, adding that the botanic garden harvest was not enough to generate heat from fermentation alone in the same way a commercial scale operation would. “All we did was put everything into a plastic bag and then put it into our warmest greenhouse.”

After nine days, the white pulp turned a rust brown and began to smell in a way that indicated the sugars were being broken down by yeast and bacteria. The smell, recalls Johnson, was funky, but “not entirely unpleasant.” Johnson roasted the beans in his home oven to an amber color, before students shelled them and blended them in a food processor. 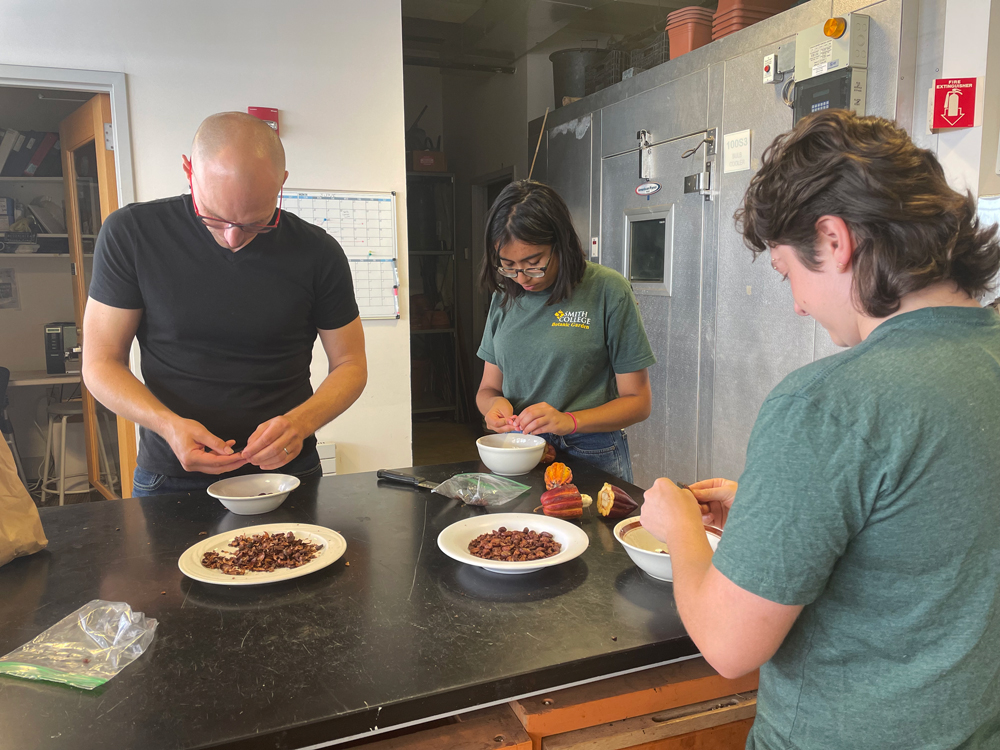 “As you're shelling them, the whole room is filling up with that smell,” says Johnson. “You almost want to make a little sachet and carry around that chocolate smell with you. The smell that comes off of it, it's so amazing. It’s inspiring. I think that's the thing that probably made [early] humans really say, ‘We have to figure this out. There's something here.’”

The true test of any chocolate, of course, is in the eating, which is where the interns’ lunchtime taste test came in. As students in the Lyman potting room began to nibble their pieces, a sense of anticipation soon gave way to some interesting expressions. 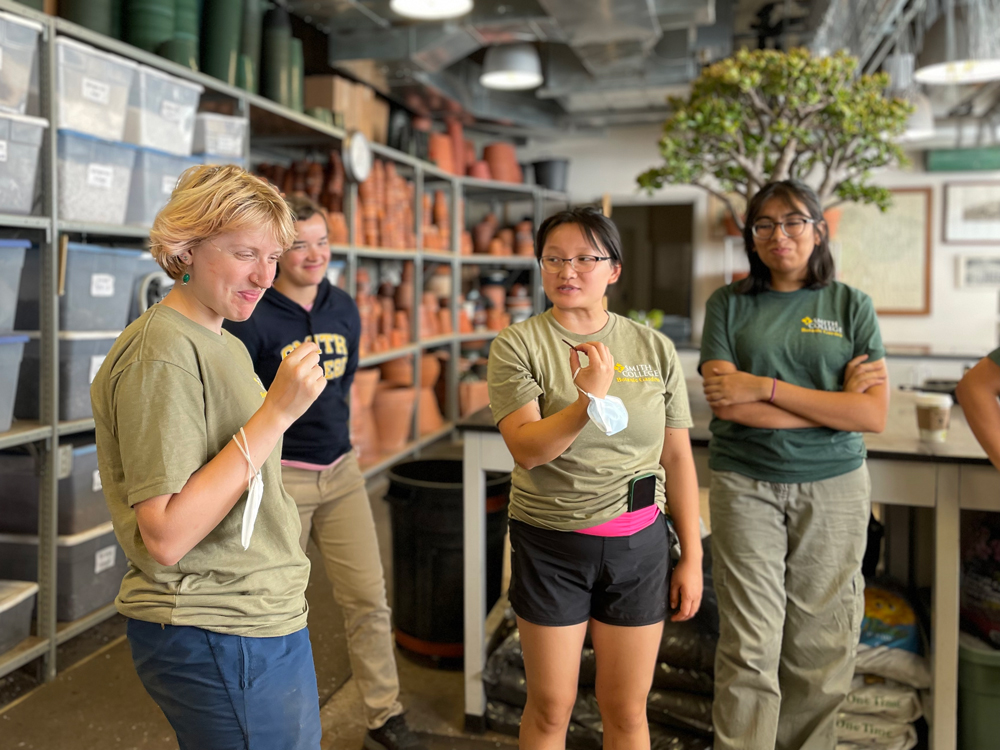 The consensus: The botanic garden chocolate was gritty, a little like coffee and not terribly pleasant.

“Like it sat in the car,” agreed a third.

“Harsh!” they declared and started laughing. “It’s better than any chocolate I’ve tried to make,” someone amended.

Landscape Curator John Berryhill, who was also on hand for the tasting (and who later clarified that he found the final product bitter), summed up the general feeling: “I didn’t like it, but I was glad I tasted it.”

Smith has long punched above its weight in the fight against climate change. Here’s how.

Takes One To Grow One

When the pandemic pause gave them a chance to reboot, Botanic Garden staff decided to make a long-held tradition as diverse and resilient as students themselves.

The college’s cutting-edge project to convert its aging fossil-fuel-fired steam heating system into a state-of-the-art, electricity-fueled geothermal system took some big steps over the summer, moving Smith closer to achieving carbon neutrality by 2030.

Prof. @CarrieNBaker weighs in on what may be next following the reversal of Roe v. Wade. https://t.co/5yA0QGx3sX