News & Events for the Smith College Community
Campus Life May 7, 2021

BY Linnea Duley ’16
When Caleigh Johnson ’21 was contemplating colleges, Smith wasn’t on her list. But when she was recruited to join the volleyball team, she knew instantly that Smith was the right place for her.

“It’s such a cliché,” the Georgetown, Texas, native says. “But the moment I stepped onto campus I felt like I was home.”

Settling in quickly after being accepted and making the trek up to the East Coast, Johnson embarked on four years at Smith filled with athletics, academics and a strong sense of community service. Her ability to intertwine these interests is impressive.

“I declared my major in economics during my first year,” Johnson says, noting that she’s always had a keen interest in corporate finance. She’s successfully juggled a full plate academically, deftly balancing her major with a minor in exercise and sport studies and a concentration in global financial institutions.

Johnson credits much of her success to her mentors: economics professors emeriti Charles Staelin and Randy Bartlett, who were her major and concentration advisers, respectively.

Staelin taught Johnson’s first economics class at Smith. “He really made me fall in love with the subject,” she says. “I couldn’t have done Smith without him.”

Johnson notes that her advisers’ encouragement extended beyond the classroom. “They went to nearly all of my volleyball games,” she says. “It’s a different kind of support you feel when you see your professors on the sidelines at a game. They helped make my time at Smith very special.” 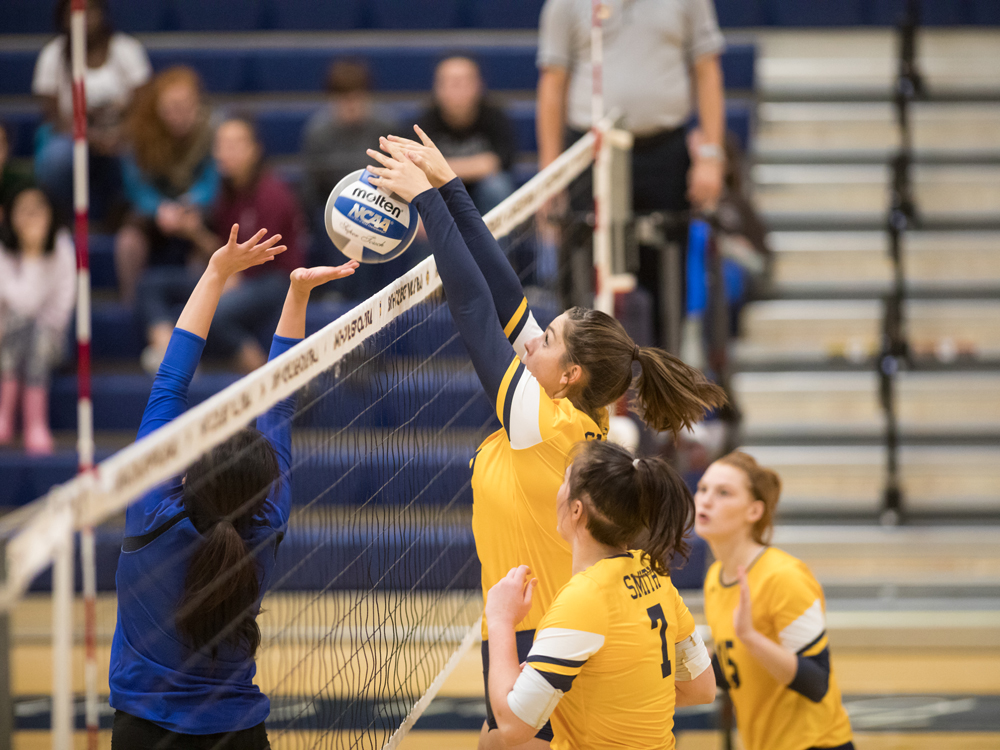 Caleigh Johnson at the volleyball net blocking a set from an opposing team member.

By her junior year, Johnson was captain of the volleyball team and president of the Student-Athlete Advisory Committee. She used these positions to help make a positive impact within the greater Pioneer Valley—to create a bridge between Smith athletics and the Northampton community. “I thought it was important for us as a department to not only give back to Smith, but to local people,” she says.

And so Johnson helped launch several SAAC-led community service initiatives, among them a partnership with Cathedral in the Night to help give food to people experiencing homelessness; “Trick or Treat so Others Can Eat,” a now-annual event through which athletes go door to door collecting food donations for the Northampton Survival Center; and a bake sale to raise funds for flood relief in Houston, Texas, after Tropical Storm Beta.

While the pandemic has tried to hamper some of these traditions, Johnson says SAAC has found creative ways to give back despite social distancing. They’ve joined forces with a physical education teacher at Thomas M. Balliet Elementary School in Springfield, Massachusetts, to create “Brain Exercisers,” short calisthenics videos aimed at combining athletics and math to create active breaks in virtual learning for students.

As for life beyond the Grécourt Gates, Johnson is looking forward to August, when she’ll begin her career as a financial analyst with Dell Technologies, having completed back-to-back summer internships with the organization as an undergraduate.

First, though, she’s hoping to coach a club volleyball team. “My parents told me to just relax this summer,” she laughs. “But I’ve gotta keep going!”

This summer at Smith is a mix of virtual and in-person activities, including a record number of on-campus student research projects, pre-college and career programs and new humanities and social sciences labs.

Cutting-edge research, book awards and nominations for federal government service are among the recent accomplishments of Smith students, faculty, staff and alums. Read about them in the latest People News column.

In a commencement speech alive with her own literary art, United States Poet Laureate Joy Harjo urged members of the Smith class of 2021 to map a future using the tools of “truth, wildness, beauty, transformation, bravery.” The college awarded 644 degrees on Sunday to students from 45 states and 32 countries.