Takes One To Grow One

BY Rachael Hagerstrom ’02
A student considers which new plant friend to take home in the Lyman Conservatory. Photograph by Shana Sureck

Maya Bonner ’18 remembers well the moment she picked up the pretty little ivy plant at the botanic garden. “I looked at my mom and said, ‘I give it a week.’”

Placed on the windowsill at Park House, her plant survived for a few weeks and then just “kind of …shriveled up,” she says. “I swear it was fine before that.”

Maggie Nolting ’19’s ivy didn’t die immediately, but it also didn’t last out the year. “I fried it during the summer after first year when I left it outside for too long,” Nolting says.

“The upperclass students had watched us carry the ivies in, so excited, and were like, ‘good luck,’” laughs Linnea Duley ’16, recalling the initial first-year excitement. “Some people named theirs, which made it worse.”

At Smith, the memory of killing the traditional first-year ivy is nearly universal. It’s also one that botanic garden staff now hope no Smith student will ever have again.

This year, staff filled the Lyman Conservatory with 36 different varieties of hardy, windowsill-loving plants for first-year students to claim—some 1,200 in all. Not a single one of them was an ivy. 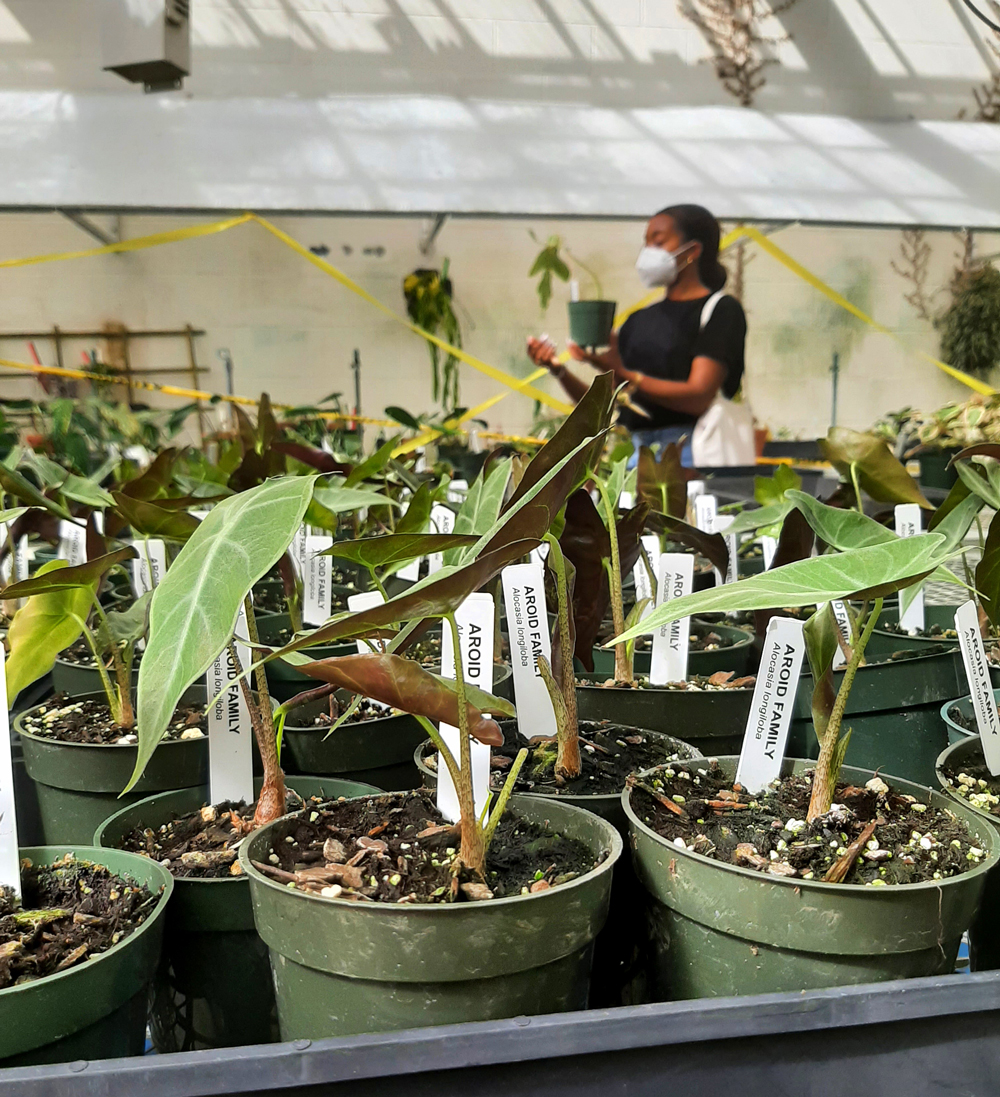 “We made this change really on the strength of our desire to make it work better for students,” says Conservatory Curator Jimmy Grogan. “We decided not to worry about the tradition because the tradition wasn’t working very well.”

Not that new students seemed to mind. Moving past trays of flower-shaped jades and graceful, tall alocasias, Jackie Muñoz ’26 paused at an impatiens with peach-colored leaves. She said she wanted something that reminded her of her grandmother’s extensive plant collection. Duha Syar ’26, in the greenhouse with family, had tucked under her arm a striking plant that she hoped would bring “a lot of home to campus.”

“It also looks very dragon-like and the leaves are very eye-catching,” Syar said.

The Fall Potting Up Clinic, to be held October 18 from 1:30-5 p.m. in Lyman Conservatory—and open to any students with new plants that have outgrown their current containers—will be the first gauge of how well the effort to provide a better caliber of plant has done this year.

How did Smith’s long-standing ivy tradition evolve? To understand that, you have to first go back to 2020, when the COVID pandemic forced Smith’s botanic garden to close to the public for a year.

Grogan was then fairly new to the scene, having joined the staff in 2018. “When I came here, I inherited the ivies,” he says, “but I heard again and again from students and colleagues that students really struggled with ivies.”

Having held a similar position at Mount Holyoke College, where he was also in charge of first-year plant propagation, Grogan knew that young ivy plants could be difficult, with weak root systems and a tendency to grow in long, unwieldy vines.

Dim windowsills—and other low-light conditions—were also not a place where such sun-loving varieties thrived. Although students were eager to take them, an estimated 90% of the new plants expired within a year. (As Grogan notes, alums who can remember killing beloved ivy should feel no shame.) 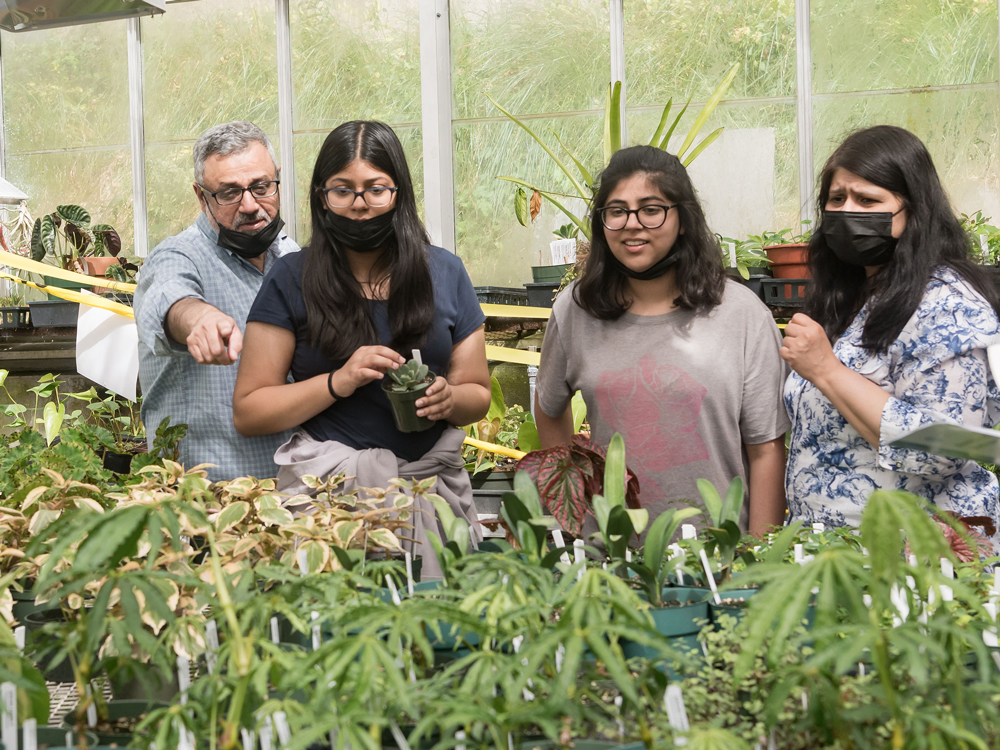 Picking out the right plant was a family affair for some students. Photograph by Shana Sureck

This was not exactly the outcome the botanic garden staff wanted, where the annual first-year plant giveaway is designed to be both an introduction to the conservatory and a tempting peek into a wider, more exciting, plant world.

“The real objective of it, historically, is just to put us on the map,” says Grogan. “But my objective, as a grower, and as a plant-crazy nerd, is I want as many students as I can to have a success, so they get that feeling of connection of growing something.”

When Smith announced that the campus would reopen to students in the fall of 2021, the botanic garden staff realized they had to quickly grow 2,000 plants—enough for two classes of incoming students. The amount of plants they needed, coupled with how unsuccessful the ivies had been, was an opportunity for staff to pivot to new varieties.

Grogan began growing succulents, his specialty, while greenhouse horticulturalist Dan Babineau (who Grogan describes as a “plant savant” for his ability to grow most anything), zeroed in on light-tolerant “leafies.” The resulting collection—a diverse and modern assortment that better reflected student interests—was a huge hit.

Of course, it also didn’t hurt that a new generation of Instagram influencers had introduced small, hearty plants as “hip, cool accessories,” notes botanic garden Director Tim Johnson. Johnson, who is equal parts amused by such trends (“plants are the new pets!” he laughs) and encouraged by it, sees the first-year giveaway as an antidote to “plant blindness,” a modern problem where people don’t see or value the plant life around them.

“You have to believe that there's a whole bunch of people out there who have a latent love of plants that they don't know about,” he says. “And we just hope that they find it early so that they can pursue it as far as they want to pursue it.”

As with any big change, the new plant distribution effort has had some unintended consequences.

Notably, the number of students returning to Lyman for advice about caring for the new plant varieties has surged, prompting the botanic garden to create new initiatives to keep up. For example, a series of plant clinics, launched last spring, where students can repot plants that have outgrown their original containers, drew 150 students, three times the expected attendance. 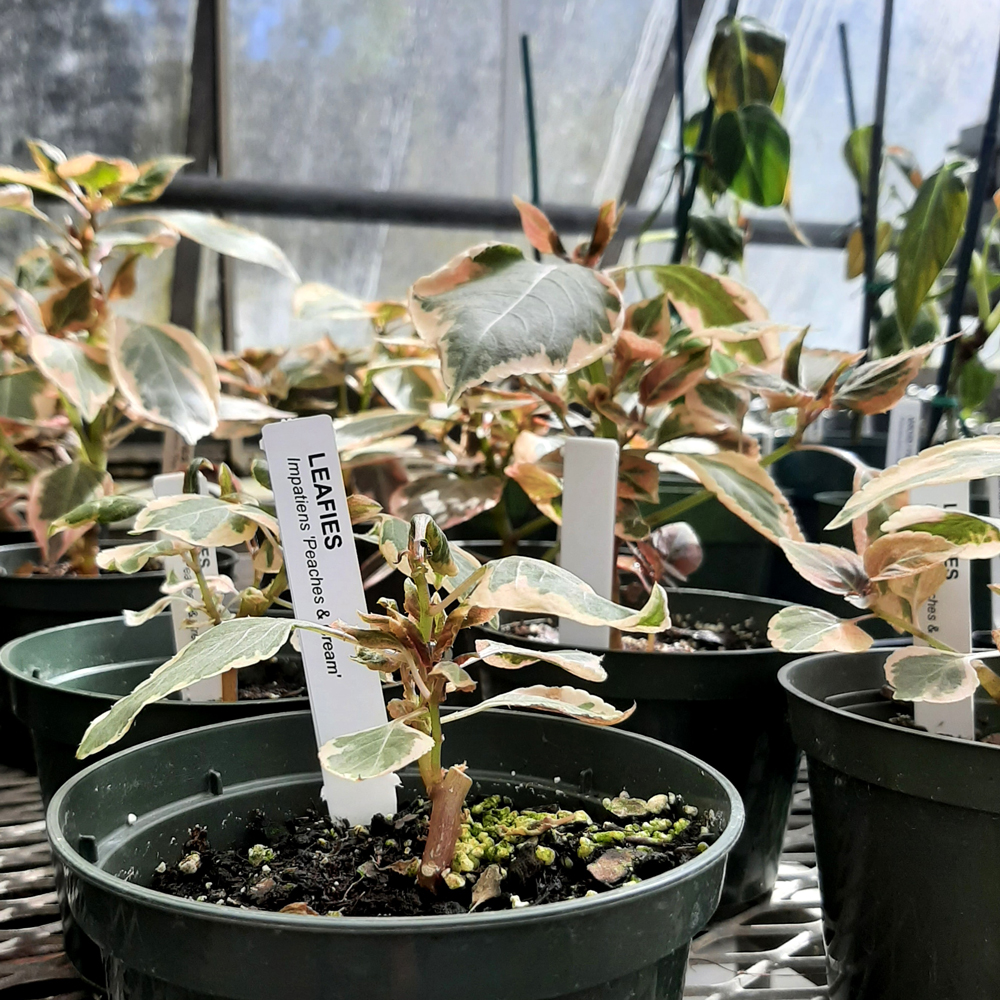 By late this summer, preparations for the newest batch of first-year plants were well underway in the Lyman potting room. Sitting at a workbench, botanic garden intern Minha Virk ‘25 was having her first lesson in propagation. Before her were large trays of perlite and vermiculite clay—moist and airy places for plant cuttings to take root—as well as large pots of the parent plants: peperomia, purple passion vine, impatiens.

“This one will be a big hit, so take as many as you can,” said Babineau, snipping from a purple passion vine, which he then dipped in a jelly jar of rooting hormone. “You can honestly do 90 percent of that as cuttings.” As Babineau began walking through the care tips for each young plant, Virk admitted that she didn’t have a first-year plant of her own.

“Oh my god! Do you want one?” Babineau asked. And the two headed off into the conservatory to find something new. 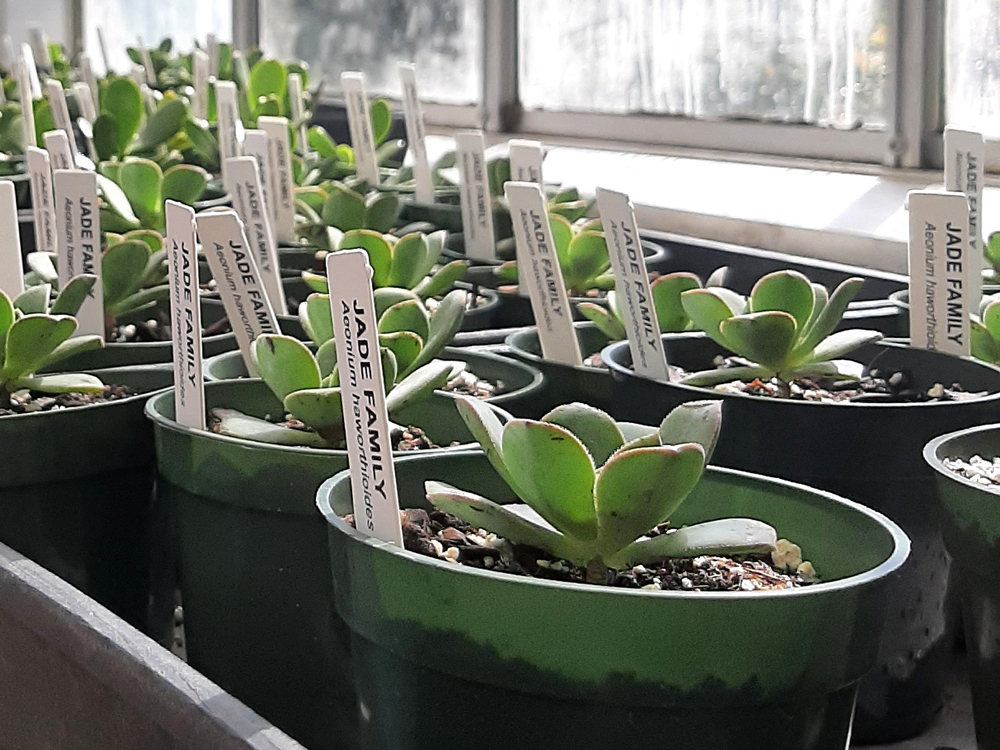 Succulents in the jade family wait to greet new students in the Lyman Conservatory. Photograph by Linnea Duley ’16

Jimmy Grogan in his own words

Every kind of plant, for me, has a different feeling. It’s so surprising what a student will choose. She might have 36 things and she’ll go for this one thing I’d never look at. That’s what people are—they’re so individual.

I collect plant behaviors. So a plant for me, it’s a story, but not a story that has any kind of human agency in it. It’s a story of how another living being behaves in the world.

If you grow a plant from a seed into a plant that is mature and flowers, then you see the whole life cycle, or one version of it. I have all of that in my mind. All the things a plant needs is part of that.

It’s kind of a composite story. It’s not only all the forms that you take as you go through your growth and your flowering, but also what you need to get there. That’s what we do. We provide. We’re the stewards, the caretakers of these different kinds of lives that come from so many different kinds of situations in the world. And we have to, as best we can, give them a facsimile of what they expect. They don’t know they’re not home. We fool them into believing they’re at home. It’s a kind of magic trick.

Of course they’re not, but they can still flower. If they flower, then [the plant is] comfortable enough to do the final thing that they have to do. Flowering is so many things for me. It’s a pat on the shoulder for me.

If you will observe, watch, pay attention, your plant will tell you what to do. Don’t worry so much about a formula for care. You just have to observe.

The college’s cutting-edge project to convert its aging fossil-fuel-fired steam heating system into a state-of-the-art, electricity-fueled geothermal system took some big steps over the summer, moving Smith closer to achieving carbon neutrality by 2030.

Audrey Cho ’24 is one of 55 college students selected nationally this year from more than 380 applicants for a prestigious Udall Undergraduate Scholarship.

Smith is acting in the face of the climate crisis. In mid-May, the college will break ground on a bold new infrastructure project—one that will allow Smith to realize its pledge of becoming carbon neutral by 2030.