For Mary-Kate Wilson ’25, learning a language is about prioritizing communication over perfection.

Since she began studying Arabic in middle school, Wilson has discovered that learning (and loving) the language doesn’t hinge on mastering grammar or pronunciation. “If you could be understood by a native speaker, and if you could understand them,” she notes, “you’ve succeeded in communicating in Arabic.”

For the Washington, DC native, the best test of this concept took place during the third U.S. Universities Arabic Debate Championship. Held at Stanford University earlier this month, the competition featured 40 colleges and universities, some 250 students, and multiple rounds of complex debate. A Smith team made up of Wilson, Anaan Choudhury ’24, and Clara Garvey ’24, and led by Professor May George, lecturer in Middle East Studies and the Five College Initiative, won against Collin College and the University of Missouri. Wilson was also awarded third place in the “Arabic as a Foreign Language” category. 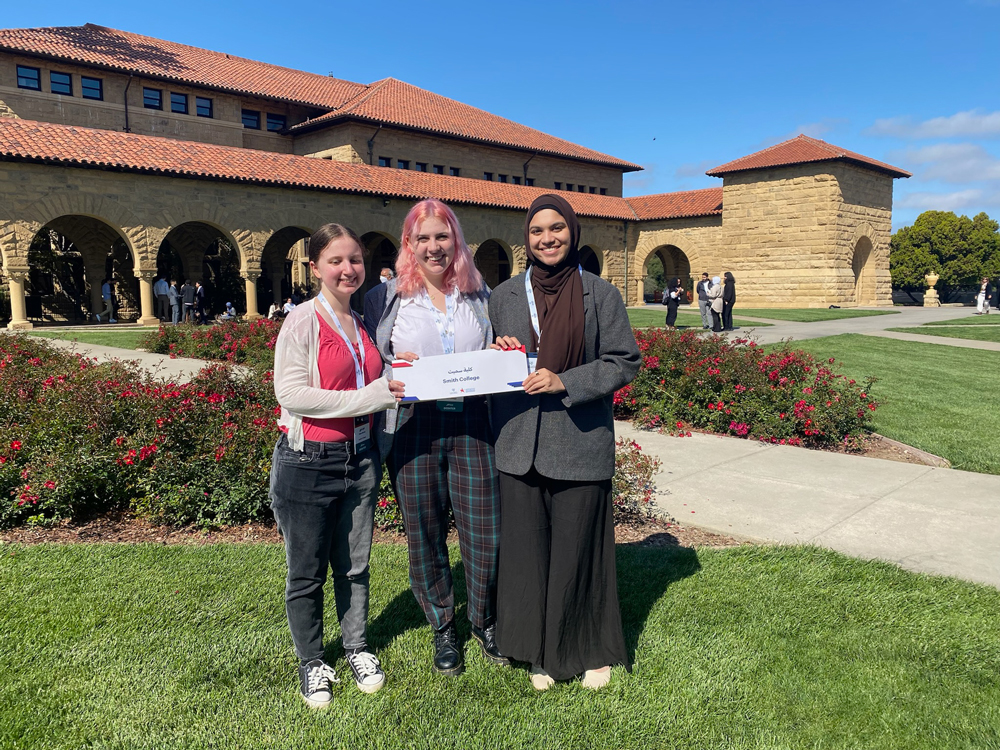 Wilson, who is undeclared, plans to major in English creative writing with a minor in Arabic. Here she talks about starting her Arabic journey; her recent five-week language intensive course with the Sijal Institute in Amman, Jordan (partially funded by Smith’s Middle East studies department); and her experience at the debate championship. Wilson is also on Sessions House council, a treasurer of the poetry club Spitfire, and a member of both the Writer’s Flock and Smith’s synchronized swimming team.

I started learning Arabic in eighth grade. When talking to different language teachers, I really responded to our Arabic teacher’s approach. He didn’t care if you pronounced words correctly the first time, or if you messed up on a grammatical concept. His main focus was on communication. Any fumbles or mistakes were OK, as long as you kept pushing to get your idea across. His communication-focused approach to language learning was super helpful for getting me to let go of my anxiety about being “wrong” while learning.

In my second year of Arabic, we were asked to do a presentation about a musical artist from the Middle East. I found the band Mashrou’ Leila and became kind of obsessed with learning their lyrics. I remember pretending to study by listening to them on repeat instead of doing vocab practice. Finding a personal interest in Arabic got me really motivated to understand the language at a higher level.

Something that’s been difficult about learning Arabic is that there are so many colloquial dialects that I never feel like I’ll be fully done learning, but that’s also a good thing! In most Arabic classes I’ve taken, we’ve studied Fusha, which is Modern Standard Arabic. It’s the formal Arabic that is spoken on news stations and in a lot of written literature, so it’s very helpful to know. But when I studied abroad in Jordan this summer, I suddenly felt like I was starting all over because I was behind in colloquial vocabulary and grammar.

The [U.S. Universities Arabic] debate was really intimidating. A lot of the teams we were competing against were comprised of native speakers or heritage speakers of Arabic. There was a barrier around what vocab we knew, even though we had dictionaries. We also didn’t have the debate experience that a lot of other teams did. Before the conference, none of us knew formal debate rules, and kind of learned as we went through the program’s orientation. That was good, though, because from the first day we decided that our outlook was, “We aren’t here to win a debate tournament. We’re just here to practice Arabic.” I think that taking the pressure off of ourselves to win let us try our best, and we ended up winning two rounds!

We got our debate topics on the spot, 20 minutes before we had to compete. That was scary, but it was good because we felt like we were on equal footing with the other teams. Nobody got extra time or resources to research. Our first motion was, “This house, as a highly educated professional in an authoritarian state, would refuse to work with or for the government.” The phrasing of the motion was super intimidating, but as we prepared, we just broke it down into its smaller parts. Each team member had a set amount of time to speak, so we were able to delineate different examples and reasons among us.

Other topics we debated were about if people would vote on Supreme Court justices; about class and political identity in America; and if media companies should provide multiple perspectives to every major issue they televise.

I didn’t expect to win a medal at the end of the conference. There were so many super talented speakers we competed with that I felt like it was a long shot. But in our first two rounds, I got scored as “best speaker,” even in a round we lost. A representative for the debate explained that they try to give the best speaker position to an Arabic learner in every round to promote learners’ confidence, which I really appreciated. My teammates were very encouraging, and when they called my name at the final awards ceremony, Anaan jumped up and gave me a hug. That was the best part. Our new friends that we made from the Purdue University team cheered “Smith!” when I went on stage. 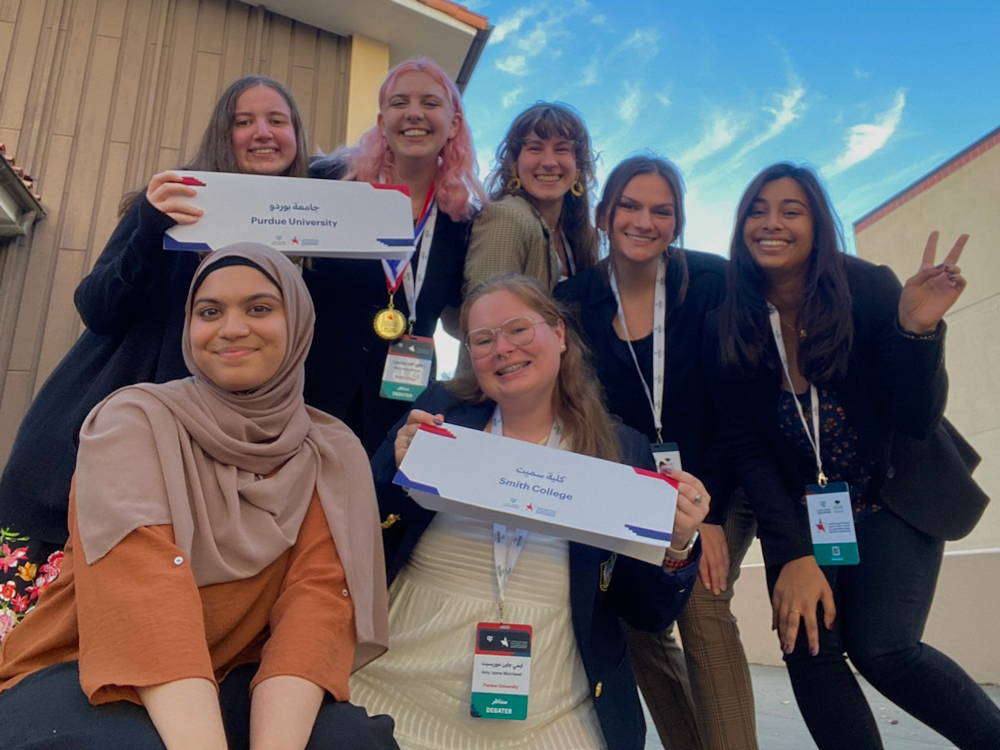 New friends on the Smith and Purdue debate teams pause to snap a group photo.

It’s important to use the language you’re learning in a fast-paced context, even if it’s scary. At Smith, we have some wonderful language programs and professors, but it’s important to push yourself. I also had a moment when a male judge at the competition asked me if I really went to an “all-girls school.” I corrected him that no, I go to a historically women’s college, and that I’ve really loved my time at Smith so far. It’s important to show up for HWCs at events like this, where many prestigious schools go head-to-head, especially when some people have misconceptions about what it means to go to an HWC and might misconstrue the identities and abilities of students who attend them.

Also, Arabic is a gendered language, and you conjugate verbs differently based on the gender of who you're speaking to. Competing against some all-male teams at the debate got me to think more consciously about grammar after being in Arabic classes with mostly women for a year, which is a side effect I did not expect.

After the debate, I feel a lot more confident in my language ability. I might not speak Arabic perfectly, but I’ve learned how to use circumlocution and get an idea across. Even if we make mistakes, I’ve realized that my teammates and I can still come up with a logical argument and defend it in Arabic, which makes me feel super capable, even when up against people with much more language experience.