While working on the upcoming Smith production of “Fun Home”—a musical based on Alison Bechdel’s graphic novel—cast and crew members experienced a bit of behind-the-scenes magic.

On a recent afternoon, company members gathered in the Steinem Reading Room on the third floor of  Neilson Library to review drawings, letters and other items that are part of the Alison Bechdel Papers housed in Smith’s Special Collections.

“It’s so exciting to be able to come and look at the original documents,” said Maggie Landis ’24, set designer for the show, who was poring over a sheaf of original drawings of Bechdel’s childhood home. “We knew the house would be an important character in the show and I wanted to be able to see what it looked like in the book.”

“Being here makes me even more invested in the narrative arc of what’s happening in the play,” said Ada Comstock Scholar Adriana Piantedosi, who plays an adult Alison in the production. “This is a show based on the stories of real people.”

“Fun Home,” directed by Fiona King ’22 opens Wednesday, April 20, at 7:30 p.m. in Theatre 14 and runs through Saturday, April 23. More than 45 students are directly involved in the production, which is based on Bechdel’s 2006 graphic memoir about her own sexual awakening and her troubled relationship with her father. 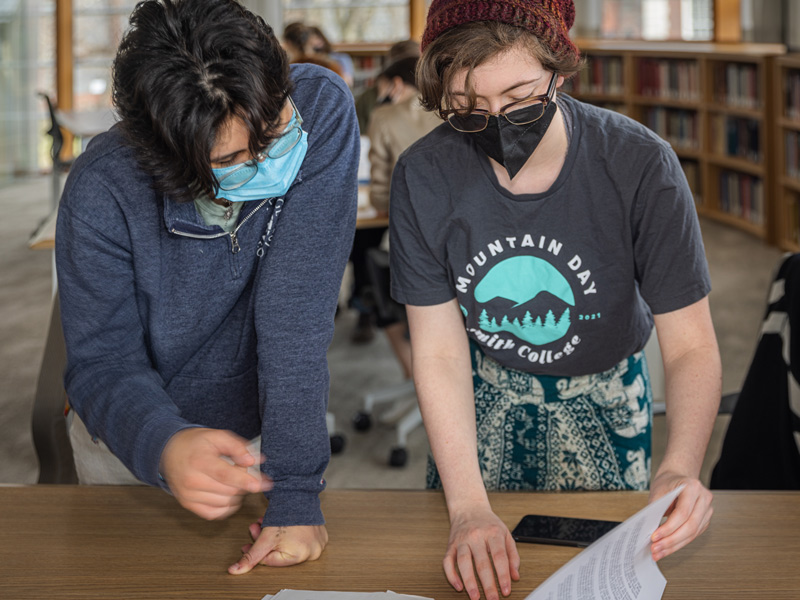 “I feel like a big part of ‘Fun Home’ is about how we look back and process trauma,” she says. “What I’m trying to do with my direction is look at memories vs. reality. How do we know what we remember is true? How do we find the truth? And how do we process all of that into a story that makes sense to us?”

King learned about the Bechdel collection through “Smith word of mouth,” and was inspired to organize a group field trip to the library after viewing some of the items in the collection.

“It’s just a ridiculous treasure trove,” she  says. “We’ve done a lot of talking and preparation, and everyone has read the graphic novel. The cast has been begging me to go as a team” to explore Bechdel’s papers.

As company members gathered around a set of tables in the archives, Leslie Fields, head of Special Collections public services, explained that the four boxes of “Fun Home” documents in front of them represented a fraction of the full collection that Bechdel established at Smith in 2008.

“We’re thrilled you are here to do research related to the production you are working on,” Fields said. “We’ll put a box at each table and you can just dive in.”

“Feel free to take photographs,” she added—an instruction that met with a spate of smiles, head nods and cell phone cameras at-the-ready.

At one table, students paged carefully through a typed synopsis of Bechdel’s novel, while students at another table examined playbills and a series of book proofs marked in red pen by the author.

“Her voice really comes through, even in the notes she’s written,” said Alex Beardsley ’25, who plays Bechdel’s younger brother John in the show. “You think about the real person whose story we are telling. It’s more like having a conversation.”

At the next table, students had discovered a line in the book synopsis that resonated with the group: “The theme of the book is telling the truth.”

“This is so cool,” King said, as a thoughtful silence descended. “It’s just so special to be doing this with everyone here.”

Tickets to the Smith production of “Fun Home” are available online or at the box office.

“Stoop Pigeons,” a play about life in a mostly Black and Latino/a city neighborhood, launches a Smith theatre season centered on plays by and about women, people of color and gender and sexual minorities. Performances begin on Friday, Oct. 22.