Connection and Inspiration: Students React to the New Neilson

When Karly Toledo ’21 got her first look inside the new Neilson Library, it immediately inspired lofty thoughts.

Toledo has spent time in the library every day since it opened on March 29 to students, faculty and staff in Smith’s COVID-19 testing program. As a senior, she’s been especially eager for the completion of the building project launched four years ago.

“I’ve watched the new library grow from the first scale model,” says Toledo, who is studying government and economics. “It’s so great to actually be able to go in and use the space. I feel like I’m in a movie set, it’s so beautiful. I have an urge to sit in every single chair!”

For Toledo, the new Neilson offers a much needed space to connect with classmates.

“In the microeconomics class I’m taking, we’re doing very difficult material and you really need study groups,” she says. “We’d created virtual groups, but now we can actually meet each other for the first time [in the library]. I’m really enjoying being around more people.”

Ada Comstock Scholar Dori Mondon-Freeman was struck on her first visit by the way an open column—the oculus—at the center of the new building, draws in light from the outside. 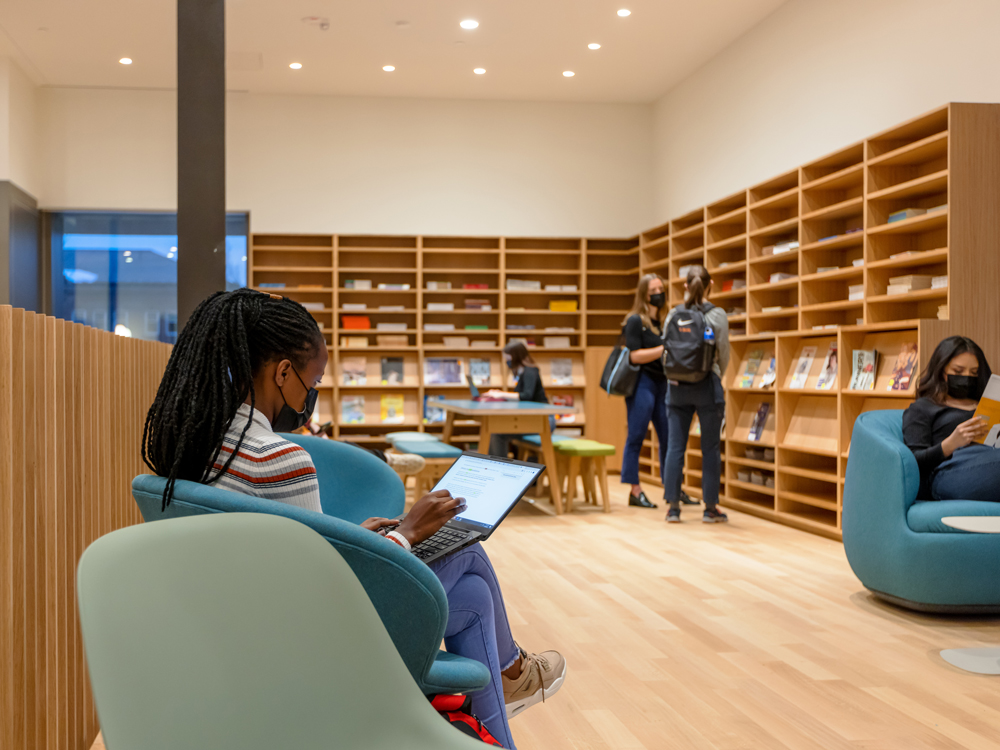 “When I walked in, the oculus was right in front of me, and it just amplifies all of the beautiful, natural light coming in,” Mondon-Freeman says. “I decided that anywhere near that part of the building is where I want to be.”

Mondon-Freeman was also drawn to the window-seat nooks in the third-floor reading room. “I’m just going to pick a different spot to be in every day,” she says, with a smile.

In addition to enjoying the space, she is looking forward to exploring items in the library’s Special Collections, which will be housed together in the south wing of the new Neilson.

“I have just declared an American studies major, and I recently started falling in love with history,” says Mondon-Freeman. “So Special Collections is one of the parts of the library I’m really excited about using.” (The collections will move into the new library beginning May 30 and will be open for use on August 30.) 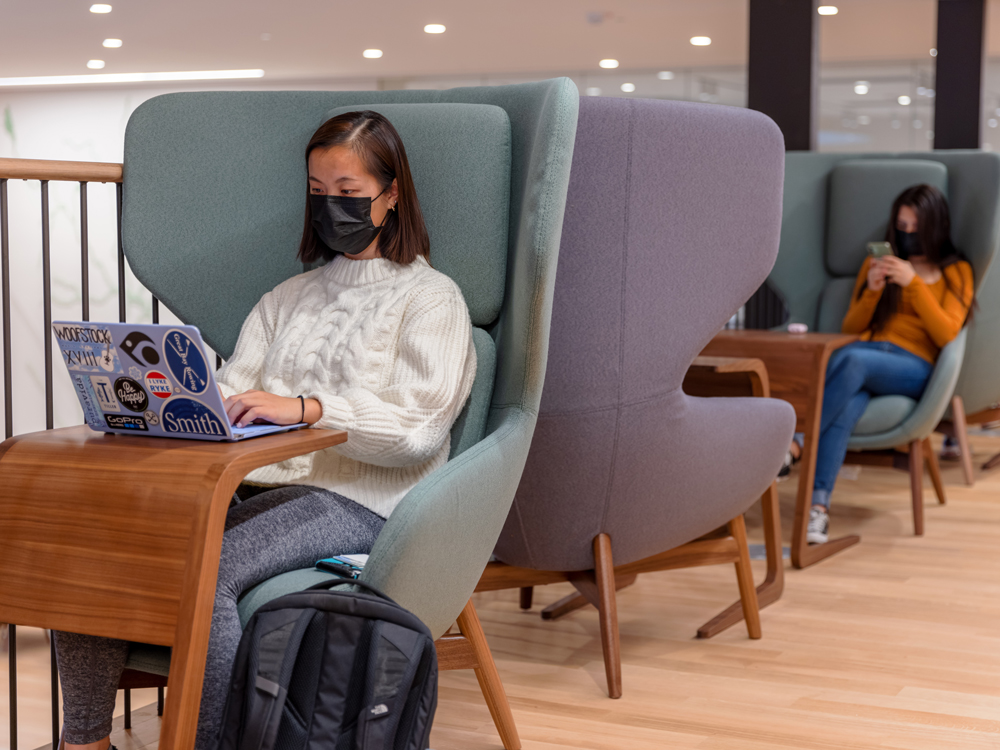 The reimagining of Neilson—one of the largest capital projects in the college’s history—promises to transform teaching and learning at Smith, with a design by architectural designer Maya Lin that emphasizes flexibility, openness and collaboration, says Susan Fliss, the college’s dean of libraries.

“It really is a unifying space where everyone can gather to study, engage with ideas, use the incredible technology and the expertise of staff, and share what they’re learning with the entire community,” Fliss says.

Rachel Pietrow ’22 says being in the new Neilson made her realize what she’s missed about having a central campus library—particularly during the past year of remote learning and physical distancing.

“Just working in the same space as other people and having a space that’s so conducive to work helps a lot,” says Pietrow, who is majoring in biochemistry. “I’ve spent the last three years bopping around from one little nook to another. I can’t believe there’s now a whole building where I can do that.”

So far, her favorite spot in the new library is the study space on the third floor—an open area dotted with long tables and flanked by large windows. 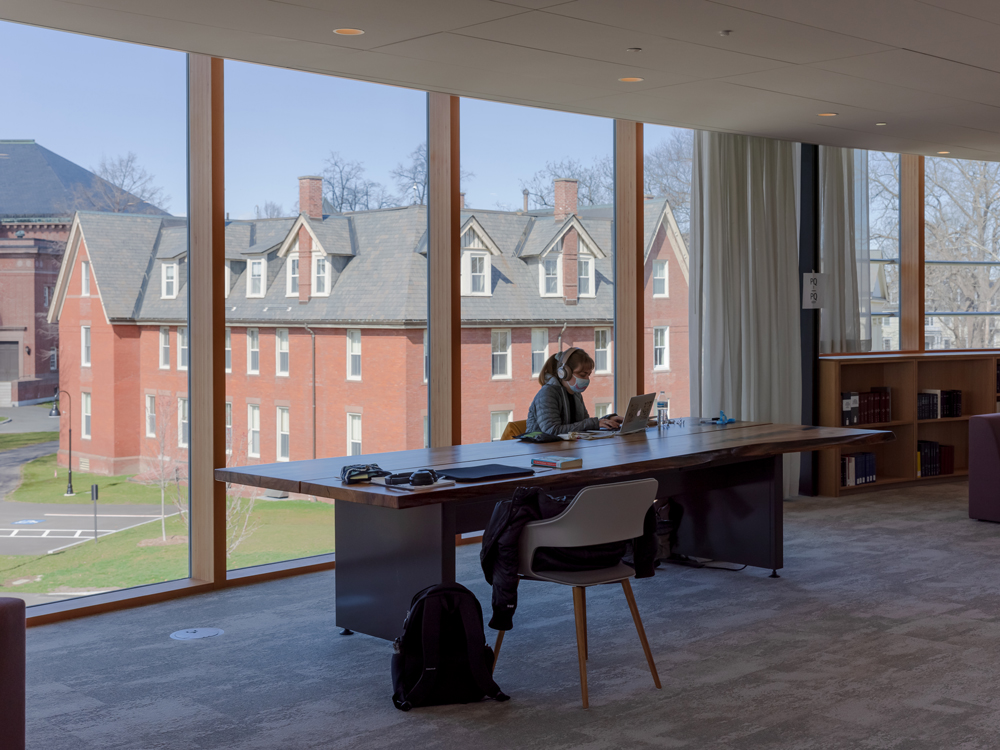 Pietrow—who plans to be on campus this summer doing a research project on neglected tropical diseases—was among more than 1,200 members of the Smith community who visited Neilson on March 29 to experience opening day.

The atmosphere, she recalls, was inspirational.

“They opened the library on a lovely day, when spring weather had finally arrived, and hope was on the horizon in that sense,” Pietrow says. “People were just walking around looking at the beautiful space. It felt like a harbinger of good things.”

A New Home for Past Presidents

Ten portraits of Smith’s former presidents—long housed near the main staircase in College Hall—will be moved to a place of prominence in the newly reimagined Neilson Library later this summer.

Why the games should have a permanent host city and other Olympic thoughts by Prof. Andrew Zimbalist, a renowned sports economist. https://t.co/IS7ILeLQ7R

In this piece, which features audio clips from her daily life, future doctor Rumbila Abdullahi '21 shares her thoughts on college, marriage, a career and motherhood. #SmithiesLead https://t.co/GjvfzcCYlk