The student actors in Smith’s production of Shakespeare’s “Julius Caesar” are taking their places and making last-minute costume adjustments before rehearsal begins in earnest.

A scene director looks on as they pin military-style medals onto their jackets and smooth their hairstyles into place.

When the group is ready, each actor reads out the scene number and claps twice to cue a recording. The technical prompt is needed because this production of “Julius Caesar” is digital, with actors performing in Zoom squares from locations around the globe.

Work on the Smith production, directed by Professor of Theatre Ellen Kaplan, began last fall and continued in an intensive interterm course, where students created a short-form, recorded version of Shakespeare’s history play.

Close to 60 students have been involved in the production as actors, directors, costume designers, sound engineers, animators—and more. “Julius Caesar” will premiere live on YouTube at 7:30 p.m. on Monday, March 15 (The Ides of March). To attend, members of the Smith community and the general public can register online.

Although the production is virtual, Kaplan says she hopes audiences will still have the real-time experience of “being lifted by the music of Shakespeare’s text; music we feel in our bones.”

She also hopes the company’s interpretation of the play about an emperor’s fall will resonate with viewers, given recent political events. “We want audiences to come away with a sense that time is, indeed, up—and that the parallels to our own precarious moment lead to deep questioning of ourselves and our society,” Kaplan says.

Bailey Hightower ’23 has been helping the company explore such questions in her role as dramaturg for “Julius Caesar.”

“The theme of my program notes is relating this play to now,” says Hightower, who is studying at home in South Carolina this spring. “The fall of Rome was hundreds of years in the making, much the same way that racism has culminated in what we’re seeing in American politics. We’re also becoming aware of problems that we’ve ignored in the past.”

Hightower—who is majoring in theatre and East Asian languages and literature—has been holding regular Zoom sessions with cast members to answer questions and offer insights about the historical context of Shakespeare’s play. As part of their coursework, students have also viewed three filmed versions of “Julius Caesar”—including one set in a women’s prison—sparking discussions about issues ranging from gender identity to the role of art in society. 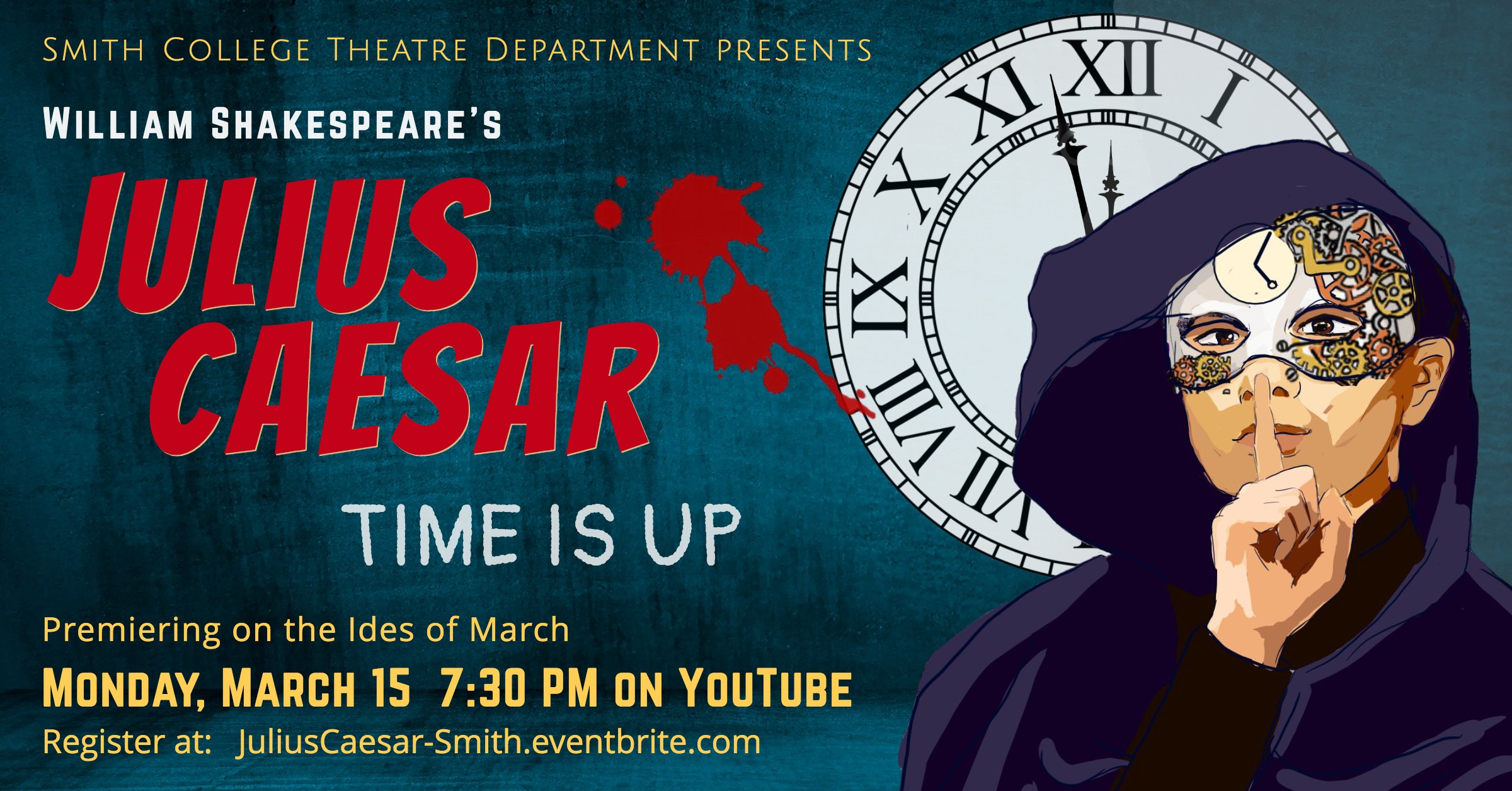 Wren Gilbert ’21, who plays Brutus in the Smith production, says she was drawn to the opportunity to portray “one of Shakespeare’s great, complex characters.”

Performing in a Zoom space has been challenging—as well as a valuable learning experience, says Gilbert, a theatre major who is returning to campus this spring after spending the fall semester studying remotely in Northampton.

“There’s absolutely nowhere to hide when the camera is less than a foot from your face,” she notes. “It takes a great deal of stamina to remain focused on your imagination. The upside is that if you flub a line, you can simply do another take. I believe digital theatrical productions will only continue to improve and become more popular from here on out.”

In early January, actors received kits in the mail containing costumes, props, lapel microphones, cloth backdrops and “green screens” to support projected scenic designs. During rehearsals, scene directors used storyboards and sound cues to help the players keep pace with each other and with videotaping.

Haley-December Brown ’23 led the production’s animation/visual arts team from her home in northern Michigan. “Our main goal has been to provide cohesion,” she explains. “Instead of having video clips played one after the other in the background, we’ve worked as a team to use media and a little bit of animation to provide a continuous color palette and seamlessness to the scenic design.”

In addition to boosting her expertise in theater design, Brown—who is returning to campus this semester—says she has “been learning career skills of leadership and work delegation, which is really exciting! It’s been heartwarming and inspiring to see how many people want to stretch their horizons and be involved with this production.”

As stage manager for “Julius Caesar,” Madison VanDeurzen ’22 has made it her mission to keep that collective spirit alive while company members are at a distance.

“I’ve learned a lot about what it takes to be an effective communicator,” says VanDeurzen, who is majoring in theatre and mathematics, and will be studying remotely from  Williamstown, Massachusetts, this spring. “I’ve also learned about problem-solving and how to work with people with different strengths and weaknesses so they complement each other to make the best collaborative work.”

For geosciences major Heather Hannon ’21—who plays Brutus’ wife, Portia—being part of the Smith production “is helping me redefine what it means to do theater.

“You don’t need a brick-and-mortar stage to create a show; you just need passion, determination and a whole lot of patience,” says Hannon, who will be on campus this spring. “It’s been a joy to learn and grow with my peers.”

A Place to Celebrate Art: SCMA at 100

Even in a global pandemic, the Smith College Museum of Art stays true to its mission of making art accessible. As the museum marks its centennial, Director and Chief Curator Jessica Nicoll ’83 considers the critical role of the arts at Smith, the idea of diversifying the collection and the solace that art provides in challenging times.