When neuroscientist Theanne Griffith ’08 was on maternity leave with her first child in 2017, she decided to take on a project most new moms might find daunting—writing the first in what would become a series of chapter books aimed at children interested in science. The fact that she had no formal experience in publishing—other than her love of books—didn’t stop her.

“There was something about that postpartum cocktail of hormones that gave me this superpower,” Griffith laughs. “I just started writing. I made a website and listened to podcasts on how to break into the publishing industry.”’

The resulting series, The Magnificent Makers, includes three books so far, the latest being The Magnificent Makers #3: Riding Sound Waves. The books follow third-grade best friends Violet (future scientist) and Pablo (aspiring astronaut), who are guided through a portal to a magical laboratory called the Maker Maze by zany rainbow-haired Dr. Crisp. STEM challenges surrounding a particular topic await the two friends and must be solved within the allotted time set by Violet and Pablo’s Magnificent Maker watches or they cannot return to their lives outside the maze.

But the stories are not all STEM fun and games. Each book also deals with a life lesson, such as the importance of acting as a team player, appreciating diversity, and being a true friend, and includes two science activities that kids can do at home. The series is targeted to children ages 7–10 but can be read aloud to children as young as 4 years old. 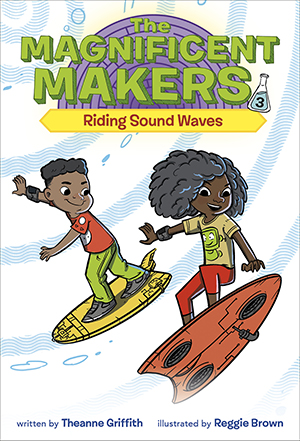 “I’m really passionate about the series,” says Griffith, who wishes she had something similar with children of color as protagonists when she was growing up. “I feel like they’re filling a hole in the market right now—diverse STEM children’s books by diverse authors.”

Griffith, who holds a PhD in neuroscience from Northwestern University, has always loved science and was a double major in neuroscience and Spanish at Smith. By participating in a program for underrepresented students in STEM (a precursor to the college’s current Achieving Excellence in Mathematics, Engineering and Sciences, or AEMES, program), she was able to use her work-study money to work in a research lab for her entire four years at Smith. Through a Praxis internship in Chile to study Spanish, she landed a two-year research lab position at the Pontifical Catholic University of Chile after graduation.

Griffith and her husband, Jorge Contreras, recently moved with their two children from their home in the New York metropolitan area to join the faculty at the University of California, Davis in the Department of Physiology and Membrane Biology.

There, Griffith will continue her research investigating how our peripheral nervous system encodes bodily sensations, such as temperature, touch, and pain—in both health and disease. For instance, dysfunction of sensory neurons occurs in people who have peripheral neuropathies, and a gentle hug can cause pain, or a refreshing breeze can feel uncomfortably cold. “I’m interested in understanding how those sensations are encoded by peripheral neurons under normal circumstances, as well as during disease states,” says Griffith.

In addition to her research and adding more books to the Magnificent Makers series, Griffith is gaining a national reputation for giving helpful advice to parents on how they can encourage their children’s interest in STEM. “I think science is important,” says Griffith. “Not everyone needs to be a scientist, but it’s important to understand the value of science and how science works.”

Griffith also wants to change the traditional image of what scientists do and what they look like. “Sometimes they have tattoos everywhere or blue hair,” she says. For Griffith, science is all about curiosity and creativity. One of the simplest and surest ways to get kids interested in STEM, she says, is to encourage them to ask questions: “The most important thing is to open your kids’ eyes to the world around them, and get them asking questions about how the world around them works and how their bodies work.”

Griffith says Smith is a fabulous place for curious, creative students like herself. “Smith is amazing when it comes to science,” she says. “And that’s something that I appreciate even more looking back. At Smith, it’s about you. It’s about you learning as much as you can. It’s about your scientific progression—not you assisting somebody else.”

Congratulations to Professor Susan B. Levin, author of "Posthuman Bliss? The Failed Promise of Transhumanism." https://t.co/hZ5YRRTmED