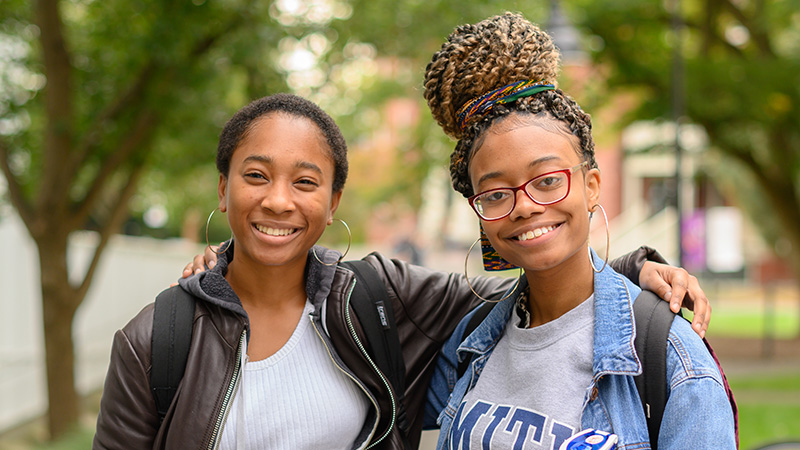 Amplify is an initiative that offers you an opportunity to gain the skills, coaching and platform you need to share your knowledge and perspectives with a public audience. It’s a forum where you can take what you’re learning in an academic setting and use it to develop a public voice by experimenting with different media, including public writing, speaking and art. Through events, workshops and one-on-one coaching and feedback, you’ll develop a piece that you’re proud to share with the world. The program culminates with a chance to submit your work to the Amplify Competition.

Amplify programming will include three virtual events this fall, where guest speakers and panelists will discuss key questions related to Public Voice. All Amplify events include a talk or discussion, followed by a 30-minute “Amplify Lounge” session, in which students can “mingle” virtually with guest speakers and ask questions in a less formal setting. Watch eDigest and the Smith Social Network for information on how to attend!

How can we know when and how to speak up publicly about issues that matter to us? We’ll be joined by Tanisha C. Ford (The Graduate Center, CUNY), scholar, writer and public speaker on the intersections of fashion, politics and social justice; and Tuck Woodstock, journalist and co-producer of the Gender Reveal podcast that amplifies the stories of trans and non-binary folks. Ford and Woodstock will reflect on how they decided to share their voice publicly, how they conquer self-doubt and the role of “expertise” in asserting a public voice.

Join Shereen Marisol Meraji, the award-winning co-producer of the NPR podcast Code Switch (tagline: Race. In Your Face.), as she shares her experience as a journalist and engages in a conversation with Smith faculty members Carrie Baker, Samuel Ng, and Liz Pryor on the intersections of race, identity, and public voice.

Join us for a conversation with three individuals speaking out about climate change, but through different media and from different professional standpoints. The panel will include artist Eve Mosher, who creates large-scale, interactive public projects examining the human relationship to the environment; Leah Stokes, assistant professor of political science and environmental studies at UCSB and frequent contributor to national news media; and Audrea Lim, a journalist who writes for several publications, including authoring the “Taking Heat” series for The Nation, which explores issues of climate justice.

LOG 100 Valid and Invalid Reasoning: What Follows from What?
Jay Garfield, Theresa Helke, and Melissa Yates

These fall courses also include a significant unit, assignment or other thematic element in cultivating public voice:

FYS 158 The History of the American Present
Jordan Taylor

Are you actively working on a public writing, public speaking or public art assignment for a class and looking for some coaching or direct feedback? Do you feel strongly about an issue and want to learn how best to speak out about it? Are you planning to submit a piece to the Amplify competition and want some feedback on your work?

The Wurtele Center motto for its new Amplify program is: “There’s never been a better time to have your voice heard.” Want to learn more about this exciting new program? Watch this information session (viewers can access this presentation on Zoom using their Smith login).

Submit a Piece to the Amplify Competition

The Amplify Competition is an opportunity for Smith College students to share their knowledge, stories and perspectives in a public forum and an event to honor their efforts toward raising their voices to bring about positive change. The Amplify Competition specifically seeks to amplify students’ voices as they speak out about the issues that matter to them. The competition is open to all Smith students, and entries can be drawn from assignments completed for a course taken for credit or a piece developed outside of a student’s course work.

Read more about the competition in an article in The Gate.

Submissions will be entered to compete for prizes in each of the three categories, plus a “People’s Choice” Award. Prize winners will be announced in early March in a virtual announcement event.

Learn about criteria, key dates and deadlines, coaching opportunities and how to enter the competition.