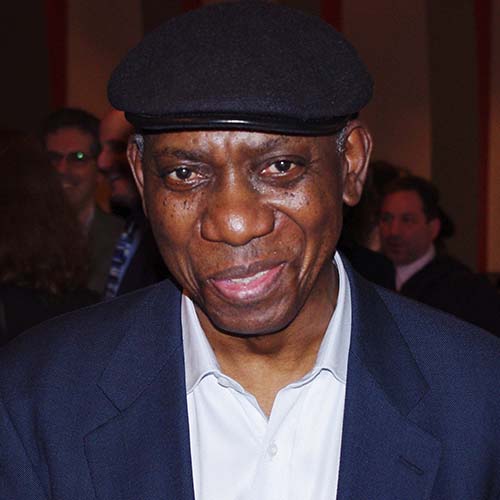 Yusef Komunyakaa has said that the gift of the poet is to see behind things. In seventeen acclaimed collections he has done just that, leading us through the richly peopled landscapes of many worlds and across moments in time, interweaving history and myth, surrealistic imagery, montage and folk idiom. Suffused with the rhythms of jazz and blues, Komunyakaa’s work relies on both intense emotional logic and creative improvisation, aiming always for the surprise note, that entryway into the secret universe of each poem. In the words of Robyn Selman, “[His] poems rise to a crescendo, like that moment in songs one or two beats before the bridge, when everything is hooked-up, full-blown.”

Born in Bogalusa, Louisiana in 1947, Komunyakaa was raised at the start of the Civil Rights movement. From 1969 to 1970 he served in Vietnam as a correspondent and managing editor for the military newspaper Southern Cross. Though he spent much of his tour of duty in the field, both witnessing combat and reporting, he did not begin writing poems about Vietnam until 14 years after he had returned home. In poems that can be at once broad and spare, global in scope and achingly personal, Komunyakaa turns away from simple answers, embracing the full complexity of human experience, bearing witness to the sounds of life even in full and sometimes contradicting dissonance. One of the most important and necessary voices of our time, he takes on—and brings the balm of music to—some of the most harrowing moments in our history.

Yusef Komunyakaa’s laurels are distinguished and many, among them the Ruth Lilly Prize, the Wallace Stevens Award, the William Faulkner Prize, and the Kingley Tufts Award, as well as the Pulitzer Prize for Neon Vernacular. Other iconic collections include Taboo, Dien Cai Dau, Warhorses, and most recently The Chameleon Couchand Testimony. In addition, Komunyakaa has co-translated The Insomnia of Fire by Nguyen Quang Thieu, published Blues Notes: Essays, Interviews & Commentaries; his plays, performance art and libretti have been performed internationally (Saturnalia, Testimony, and Gilgamesh: A Verse Play). He also co-edited The Jazz Poetry Anthology, and served as guest editor for The Best of American Poetry 2003. A former Chancellor of the Academy of American Poets, Komunyakaa has taught at the University of New Orleans, Indiana University, and Princeton. Currently, he lives in New York City where he teaches as the Distinguished Senior Poet in New York University’s graduate creative writing program.

My wide hips raised two warriors
from sweat & clay, blood sonata
& birth cry. I said anger & avarice,
& they called themselves Cain & Abel.
I said gold, & they opened up the earth.
I said love, & they ventured east
& west, south & north. I said evil
& they lost themselves in reflected rivers.

After scrimmages across Asia Minor
& guarding kingly ransom in the Horn of Africa,
my sons journeyed home to peasant bread
& salt meat, to whorish doubts & wonder,
but when I flung my arms open at the threshold
they came to me as unseasoned boys.


How can the moon still be in the sky?
How does love live past this U-turn
in a city’s wild heart? Somewhere
the lioness lifts her great paw,
& the gazelle rises. Then
she bounds past the watering hole,
into a yellowing thicket, a circle,
into the interior of a man’s dream.
He can almost hear someone praying
to get even with his own reflection.
The alarm clock plays “Skylark,”
& the pain in the man’s left side goes away.

He hopped boxcars to Chitown
late fall, just a few steps
ahead of the hawk. After
sleepwalking to the 65 Club,
he begged Goon for a chance
to sit in with a borrowed sax.
He’d paid his dues for years
blowing ravenous after-hours
’til secrets filled with blues
rooted in Mississippi mud;
he confessed to Budd Johnson
that as a boy playing stickball,
sometimes he’d spy in a window
as they rehearsed back in K. C.

It was Goon who took him home,
gave him clothes & a clarinet.
Maybe that’s when he first
played laughter & crying
at the same time. Nights
sucked the day’s marrow
’til the hibernating moon grew
fat with lies & chords. Weeks
later, with the horn hocked,
he was on a slow Greyhound
headed for the Big Apple,
& “Honeysuckle Rose”
blossomed into body language,
driven by a sunset on the Hudson.