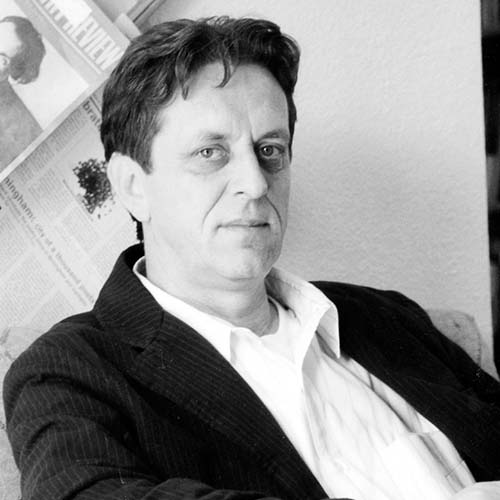 One of Bosnia’s most prominent poets and writers, Semezdin Mehmedinovic is the author of four books and has worked as an editor, journalist, and filmmaker. With Benjamin Filipovic he co-wrote and co-directed Mizaldo, one of the first Bosnian films made during the recent war in Bosnia-Herzegovina. Presented at the Berlin Film Festival in 1994, the film won first prize at the Mediterranean Festival in Rome the following year. After the war, Mehmedinovic and his family came to the U.S. as political refugees, settling in Alexandria, Virginia.

The English translation of his spare and haunting Sarajevo Blues, written under the horrific circumstances of the war, was praised by The Washington Post as one of the best literary documents of the conflict. Paul Auster writes that the book “is at once a battle report and a philosophical investigation, [charting] the collapse of a world with heart-breaking clarity and precision.” In 2004, the Oakland-based band Charming Hostess released a CD version of Sarajevo Blues scored for voices, beatbox, and string trio.

Mehmedinovic’s most recent volume of poems, Nine Alexandrias, translated by Alcalay and published by City Lights in 2003, was written in response to a cross-country train trip across post 9/11 America and to twenty-first century life in the heart of the empire. The book received a starred review from Publisher’s Weekly, which claimed that at least two of its three sequences “are as good as anything published in English this year.”

I turn and
what do I see?

My eyes open
in sleep—
a raven has landed on my table
and in a human voice says:
Cherries will be ripe in Sarajevo the 17th of May

I heard
and I’m waiting

1) Goaded on by the fear of winter, residents of Sarajevo
have taken to cutting down trees in the city; if we don’t
count the shelling, the predominant sound in town is the
buzz of chain saws. Ordinary scenes: men pull a cable
wrapped around a poplar toward themselves as it rests
before swaying to the left and right as kids run around
cheering, some for the men and some for the tree, and when
it falls a view of the woods on Mount Trebevic bursts open;
an unusually tall man, his hair grey and well-groomed,
wearing a sharp new suit, a bow-tie and shiny shoes, carries
an attache case in his left hand while with his right he drags
an enormous chestnut bough chopped down in the park
through the door to the lobby of his building.

2) “A full-fledged attack is being carried out against our
urban greenery. Trees are being cut down in our parks, along
the streets and even in cemetaries. We call upon all citizens
to preserve our urban greenery. Those who disobey this
appeal will be severely punished.”
The only conclusion I can reach from this text, published
in a Sarajevo daily, is that if I don’t protect the urban
greenery—being busy with my own work—I’ll be
punished severely. Nevertheless, on the north side of town
you can hear the mournful wailing of chain saws: people in
the city are desperate, like anyone thinned out before the
coming of winter.

I was standing in the courtyard at the train station (LA)
Looking at the water in the Moorish fountain
When a homeless guy asked me if I
Could watch his dog before he just
Went off someplace, on his way.

No one had ever asked me to look
After a dog before, at least not like that;
Looking after the dog in front of the Moorish fountain
I had no idea what I’d do with him
If the homeless guy didn’t come back.
And I write off my discomfort as inexperience:
Looking after a homeless dog, in and of
Itself, seems absurd, like anything, I
suppose, you try the first time