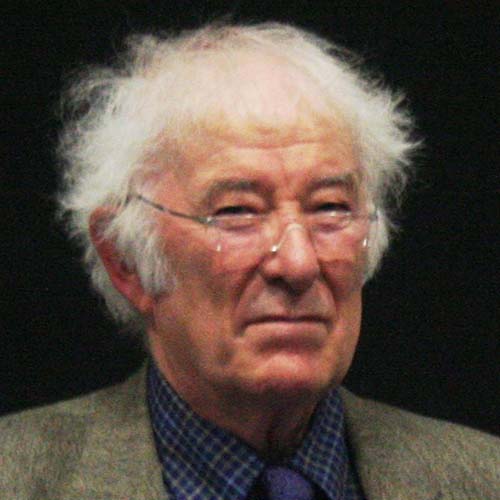 The New York Times calls Seamus Heaney a “poet of the everyday,” and the Irish poet, teacher, critic, and translator likens his pen to his father’s spade, a tool with which he excavates truths both large and small. A master of form, Heaney’s elegantly constructed poems are grounded in the mundane realities of the everyday, even as they are electrified by the complexities of a politicized world. His poems are both accessible and elevating, his language earthy and expansive. Poetry, Heaney says, can “entrance you for a moment above the pool of your own consciousness and your own possibilities.”

In awarding him the 1995 Nobel Prize in Literature, the Swedish Academy praised his ability to “exalt everyday miracles and the living past.” A public and national poet in the same vein as W.B. Yeats, Heaney’s vivid evocation of both the sensory memories of his rural Irish boyhood and the national trauma of Northern Irish strife have led Derek Walcott to dub him the “guardian spirit of Irish poetry.”

In addition to the 1995 Nobel Prize in Literature, Heaney has received numerous other honors, including the Whitbread Prize and the Writer in Residence Award from the American Irish Foundation. He is the author of 12 books of poetry, several works of criticism, and a diverse range of well-received translations, including his internationally best-selling adaptation of Beowulf, and, most recently, The Burial at Thebes, a new translation of Sophocles’ Antigone. Heaney divides his time between Dublin, Ireland, and Cambridge, Massachusetts, where he is Ralph Waldo Emerson Poet in Residence at Harvard University.

The wintry haw is burning out of season,
crab of the thorn, a small light for small people,
wanting no more from them but that they keep
the wick of self-respect from dying out,
not having to blind them with illumination.

But sometimes when your breath plumes in the frost
it takes the roaming shape of Diogenes
with his lantern, seeking one just man;
so you end up scrutinized from behind the haw
he holds up at eye-level on its twig,
and you flinch before its bonded pith and stone,
its blood-prick that you wish would test and clear you,
its pecked-at ripeness that scans you, then moves on.

It was a whole new sweetness
In the early days to find
Light white muslin blouses
On a see-through nylon line
Drip-drying in the bathroom
Or a nylon slip in the shine
Of its own electricity-
As if St. Brigid once more
Had rigged up a ray of sun
Like the one she’d strung on air
To dry her own cloak on
(Hard-pressed Brigid, so
Unstoppably on the go)-
The damp and slump and unfair
Drag of the workday
Made light of and got through
As usual, brilliantly.

And some time make the time to drive out west
Into County Clare, along the Flaggy Shore,
In September or October, when the wind
And the light are working off each other
So that the ocean on one side is wild
With foam and glitter, and inland among stones
The surface of a slate-grey lake is lit
By the earthed lightning of a flock of swans,
Their feathers roughed and ruffling, white on white,
Their fully grown headstrong-looking heads
Tucked or cresting or busy underwater.
Useless to think you’ll park and capture it
More thoroughly. You are neither here nor there,
A hurry through which known and strange things pass
As big soft buffetings come at the car sideways
And catch the heart off guard and blow it open.

From THE SPIRIT LEVEL (Farrar, Straus and Giroux, 1996)