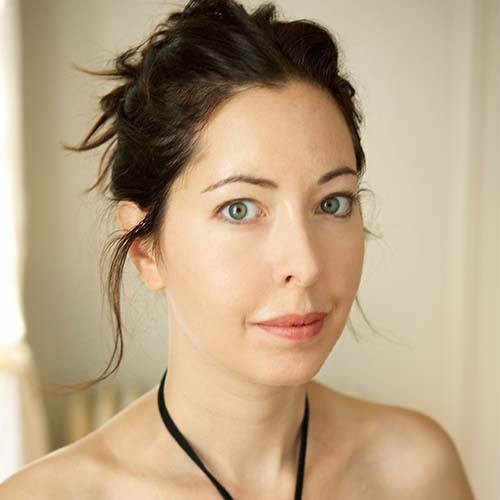 Sarah Manguso’s poems are quixotic exercises of question and aphorism, performed in a voice that Carl Phillips has called “startling, disturbing, and original.” Like the deer tracks that dash through her work, the imprints of Manguso’s words are deep and constantly changing with the ice and thaw of the poet’s interior landscape.

In her most recent book, Siste Viator (Four Way Books, 2006), she borrows and re-imagines fragments of Frank O’Hara, John Berryman, and a wandering Zen koan. Apt to strike with an alarming bodily urgency, the poems also manage to displace the reader in a dreamscape, another country, or a mathematical plane. Mark Levine has called her poems “a dance through the layers of the disparate.”

A native of Massachusetts, Manguso earned degrees from Harvard and the Iowa Writer’s Workshop. The Village Voice named her first volume, The Captain Lands in Paradise (Alice James Books), among its 25 favorite books of 2002, noting, “Over the whole fantastic, funny, ever-shifting landscape hangs the head of Wallace Stevens, aureoled like the baby deity of the Teletubbies, cooing ambiguous approval.” Such praise reflects Manguso’s whimsical charm; on the other end of the spectrum is a skeptical intellectual, deeply wanting to believe.

Manguso has held Princeton’s Hodder Fellowship, received a Pushcart Prize, and appeared three times in the Best American Poetry series. With Jordan Davis, she edited the anthology Free Radicals: American Poets Before Their First Books. Manguso currently lives in Brooklyn and teaches at the Pratt Institute. A collection of very short stories is forthcoming, and she is at work on a nonfiction book about decay.

The Deer Comes Down the Mountain

Now we gather worshipful.
The gears in his legs shine down.
He lifts his head.
Here he comes!
We’re erecting a maypole with green ribbons.
His legs are four probes.
And his back is a ship
And his eyes are holes in the curtain.
We’re eating cookies in the shape of him.
The icing is gold and silver.
He’s shedding gears, here he comes tripping!
He is casting off the elastic bindings.
Now we’re hanging giant flags.
The wind-up key sticks in his side like a blade.
The wind rocks him on his wheels,
Here he comes, crawling!
The bright obvious shines in his body.
Here comes the electric, the burning mystery!

From THE CAPTAIN LANDS IN PARADISE (Alice James Books, 2002)

How long in a cold room will the tea stay hot?
What about reality interests you?
How long can you live?
Were you there when I said this might be real?
How much do you love?
Sixty percent?
Things that are gone?
Do you love what’s real?
Is real a partial form?
Is it a nascent form?
What is it before it’s real?
Is it a switch that moves and then is ever still?
Is it a spectrum of cross-fades?
Is what’s next real?
When it comes will everything turn real?
If I drink enough tea to hallucinate, is that real?
If I know I’m waiting for someone but I don’t know who, is he real?
Is he real when he comes?
Is he real when he’s gone?
Is consequence what’s real?
Is consequence all that’s real?
What brings consequence?
Is it what’s real?
Is it what turned everything to disbelief, the last form love takes?

I want to stick my hand in the energy!
The brightness that outstays its welcome,

That rides the lightning and has to do with God.
I want to stick my hand in a Bunsen burner

And watch the flame bore through it
Like a Jesus nail. I want to light my lamp at the tip

To Massapequa I would be shouting on the side
Of the riverbank, and you wonder why I’m waving

My arms and opening my mouth wide
And throwing red fire into the low branches.