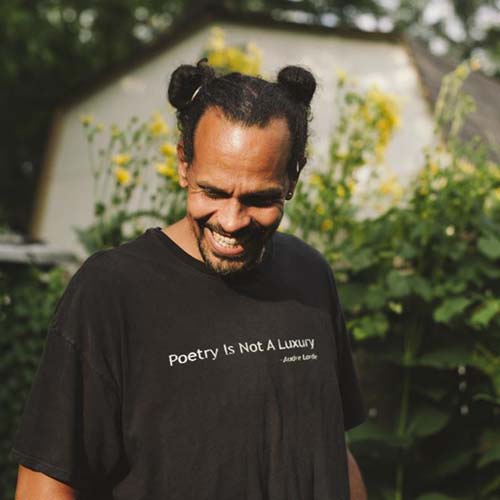 Ross Gay has said, “Almost everything that interests me is in the small moments, the very precise and nearly invisible moments that, upon meditation, have to do with everything.” His poems look for the light in bruises, racism and addiction. In the words of NPR’s Tess Taylor, they engage with “manure, mulberry-stained purple bird poop, dirty clothes, hangovers; but also the pleasure of bare feet, of pruning a peach tree, of feeding a neighbor.”

Gay’s third and most recent collection, Catalog of Unabashed Gratitude, has placed him in the spotlight of the poetry world, having won the prestigious Kingsley Tufts and the National Book Critics Circle awards and been named a finalist for the National Book Award in Poetry and the NAACP Image Award. Speaking for the National Book Foundation, Nicole Sealey declared that his poems ask that “what is dark be illumined and what is low, raised and supported.” Aimee Nezhukumatathil called the collection a song of “singular compassion for the wounded world with… inimitable musicality, intelligence, and intoxicating joy,” and the Apogee Journal declared that the poems “bevel the edges of words to forge a precarious perch from where we might look out onto an elsewhere.”

Other collections include Bringing the Shovel Down (University of Pittsburgh Press, 2011) and Against Which (Cavankerry Press, 2006), characterized by Gerald Stern as “a powerful tension between two forces I’ll call rage and tenderness (or destruction and creation; or violence and love).” He has also co-authored two chapbooks, Lace and Pyrite: Letters from Two Gardens (with Aimee Nezhukumatathil) and River (with Richard Wehrenberg, Jr.). His poems have appeared in the American Poetry Review, the Academy of American Poets’ Poem-a-Day, The Sun, Massachusetts Review, Harvard Review, Atlanta Review, Orion and The Rumpus, and in many anthologies including From the Fishouse (Persea Books, 2009).

Gay earned his PhD in English from Temple University and an MFA in Poetry from Sarah Lawrence College, where he studied under Thomas Lux, Joan Larkin, Marie Howe, David Rivard, and Gerald Stern. He has taught at Lafayette College, Montclair State University, and, most recently, in the low-residency MFA program in Poetry at Drew University and the Creative Writing Program of Indiana University. He has received fellowships and grants from Cave Canem, the Bread Loaf Writer’s Conference, the Guggenheim Foundation, and the Pennsylvania Council of the Arts, and is a founding editor, with Karissa Chen and Patrick Rosal, of the online sports magazine Some Call it Ballin’, as well as an editor of the chapbook press Q Avenue. His Artists’ Books, in collaboration with Kimberly Thomas, are The Halo, BRN2HNT and The Bullet. An avid gardener, Gay is a founding board member of the Bloomington Community Orchard, a non-profit, free-fruit-for-all food justice and joy project. He is currently working on a non-fiction book on gardening.

Is that Eric Garner worked
for some time for the Parks and Rec.
Horticultural Department, which means,
perhaps, that with his very large hands,
perhaps, in all likelihood,
he put gently into the earth
some plants which, most likely,
some of them, in all likelihood,
continue to grow, continue
to do what such plants do, like house
and feed small and necessary creatures,
like being pleasant to touch and smell,
like converting sunlight
into food, like making it easier
for us to breathe.

to the fig tree on 9th and christian

and maybe
never said more than
five words to me
at once but gave me
figs and a man on his way
to work hops twice
to reach at last his
fig which he smiles at and calls
baby, c’mere baby,
he says and blows a kiss
to the tree which everyone knows
cannot grow this far north
being Mediterranean
and favoring the rocky, sunbaked soils
of Jordan and Sicily
but no one told the fig tree
or the immigrants
there is a way
the fig tree grows
in groves it wants,
it seems, to hold us,
yes I am anthropomorphizing
goddammit I have twice
in the last thirty seconds
rubbed my sweaty

forearm into someone else’s
sweaty shoulder
gleeful eating out of each other’s hands
on Christian St.
in Philadelphia a city like most
which has murdered its own
people
this is true
we are feeding each other
from a tree
at the corner of Christian and 9th
strangers maybe
never again.

If you think you know enough to say this poem
is about good hair, I’ll correct you
and tell you it’s about history
which is the blacksmith of our tongues.
Our eyes. Where you see misunderstanding
I see knuckles and teeth for sale
in a storefront window. I see the waterlogged
face of a fourteen-year-old boy.
The bullet’s imperceptible sizzle
toward an unarmed man. And as you ask me to sign the book
that is not mine, your gaze shifting between
me and the author’s photo, whispering,
but that’s not you? I do not
feel sorry for you. No. I think only that when a man
is a concept he will tell you about the smell
of smoke. He will tell you the distance
between heartbreak and rage.