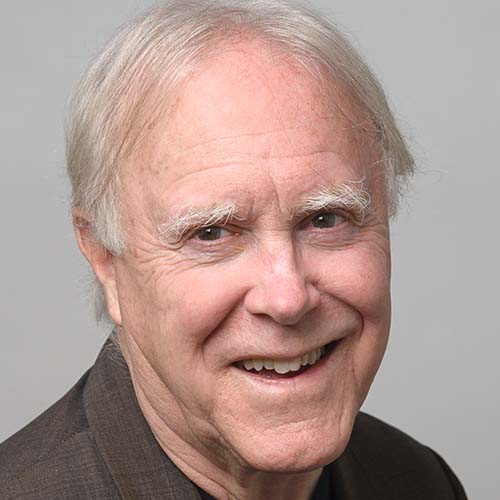 “Are you there?” asks Robert Hass, in the opening poem of The Apple Trees at Olema. “It’s summer. Are you smeared with the juice of cherries?” A poet known for his perceptive renderings of the natural world, Hass was born in San Francisco, California. Throughout his career he has earned top accolades such as the Pulitzer Prize, the National Book Award, the MacArthur Genius Grant, and two National Book Critics Circle Awards––one each for Poetry and Criticism. In 1995 he was selected as the United States Poet Laureate, serving two terms that were seminal in locating that role at the nexus of art and activism. Along with seven books of poetry, Hass has published prose works and extensive translations of the Polish writer Czeslaw Milosz, as well as other poets ranging from Issa to Transtromer. His combination of attention and devotion marks him as one of the leading writers of his era: in The Ontario Review, writer Charles Molesworth describes Hass’ greatest gifts as a “loving tentativeness” and “the need to see and to save.”

Hass’ oeuvre is rich, perceptive, and distinctly Californian. Field Guide names the “fog-soaked earth” of his home state, a coastline “thick with kelp” and hemlocks that grow “cerebral and firm.” Judge Stanley Kunitz selected Field Guide for the Yale Series of Younger Poets in 1972, praising the debut collection as “a big, strong-hearted, earthy book, in the American epic tradition of Whitman and Neruda.” Subsequent works such as Praise, Human Wishes, and Sun Under Wood experiment with memoir, dialogue, Buddhist thought, and unconventional form but stay true to Hass’ profound interest in the earth. “If there is a way in, it may be / through the corolla of the cinquefoil / With its pale yellow petals,” he writes in “Poets’ Work” from the collection Time and Materials, “In the mixed smell of dust and water / At trailside in the middle reaches of July.”

Hass’ way with words is augmented by his ability to involve them in policy. “My shorthand goes like this,” he has been known to say—“Wordsworth read a German philosopher who wrote about mountains, Thoreau read Wordsworth, Muir read Thoreau, Teddy Roosevelt read Muir, and so we got Yellowstone and Yosemite.” During his tenure as Poet Laureate, Hass organized a conference for American nature writers at the United States Library of Congress and traveled extensively to “places where poets don’t go,” bringing poetry from civic groups to corporate boardrooms. Together with writer and activist Pamela Michael he founded River of Words, a nonprofit organization for eco-literacy education that provides poetry and art competitions for youth. Sarah Pollock writes in Mother Jones magazine that Hass’ public service “has been a more public expression of the lifelong concerns that inform his poetry: a close attention to the natural world, a sense of self-development in relation to the landscape, and acute awareness of both the pleasures and pains of being human.”

In the past twenty years, Hass has served as a chancellor of the Academy of American Poets; trustee of the Griffin Poetry Prize; and professor at the University of Buffalo, the University of California at Berkeley, and the Iowa Writers’ Workshop. Today he lives in California with his wife, the poet and antiwar activist Brenda Hillman. A Little Book on Form, his latest writing on poetry, was released by Ecco Press in 2017.

I am outside a door and inside
The words do not fumble
as I fumble saying this.
It is the same in the dream
where I touch you. Notice
in this poem the thinning out
of particulars. The gate
with the three snakes is burning,
symbolically, which doesn’t mean
the flames can’t hurt you.
Now it is the pubic arch instead
and smells of oils and driftwood,
of our bodies working very hard at pleasure but they are not
thinking about us. Bless them,
it is not a small thing to be
happily occupied, go by them
on tiptoe. Now the gate is marble
and the snakes are graces.
You are the figure in the center.
On the left you are going away
from yourself. On the right
you are coming back. Meanwhile
we are passing through the gate with everything we love. We go
as fire, as flesh, as marble.
Sometimes it is good and sometimes
it is dangerous like the ignorance
of particulars, but our words are clear
and our movements give off light.

Beauty is sexual, and sexuality
Is the fertility of the earth and the fertility
Of the earth is economics. Though he is no recommendation
For poets on the subject of finance,
I thought of him in the thick heat
Of the Bangkok night. Not more than fourteen, she saunters up to you
Outside the Shangri-la Hotel
And says, in plausible English,
“How about a party, big guy?”

Here is more or less how it works:
The World Bank arranges the credit and the dam
Floods three hundred villages, and the villagers find their way
To the city where their daughters melt into the teeming streets,
And the dam’s great turbines, beautifully tooled
In Lund or Dresden or Detroit, financed
By Lazeres Freres in Paris or the Morgan Bank in New York,
Enabled by judicious gifts from Bechtel of San Francisco
Or Halliburton of Houston to the local political elite,
Spun by the force of rushing water,
Have become hives of shimmering silver
And, down river, they throw that bluish throb of light
Across her cheekbones and her lovely skin.

The Problem of Describing Trees

The aspen glitters in the wind
And that delights us.

The leaf flutters, turning,
Because that motion in the heat of August
Protects its cells from drying out. Likewise the leaf
Of the cottonwood.

The gene pool threw up a wobbly stem
And the tree danced. No.
The tree capitalized.
No. There are limits to saying,
In language, what the tree did.

It is good sometimes for poetry to disenchant us.

Dance with me, dancer. Oh, I will.

Mountains, sky,
The aspen doing something in the wind.

Available as a Broadside.