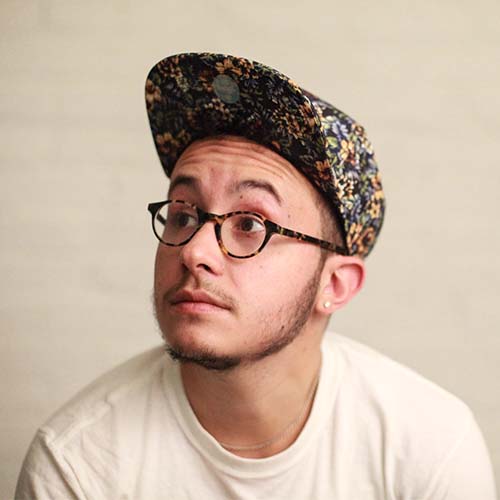 OLIVER BENDORF is a cartoonist, librarian, and educator. His first book, The Spectral Wilderness, selected by Mark Doty for the Wick Poetry Prize was reviewed widely and greeted with high acclaim. In his introduction, Doty wrote: “It’s a joy to come nearer to a realm of experience little explored in American poetry, the lives of those who are engaged in the complex project of transforming their own gender… Oliver Bendorf writes from a paradoxical, new-world position: the adult voice of a man who has just appeared in the world. A man emergent, a man in love, alive in the fluid instability of any category.”
Stacey Waite described the book, which was named a Best Poetry Book of 2014 by Entropy Magazine, as “a queer ecology endlessly transformed by possibility, grief, and the unruly wanting of our names and bodies.” And Natalie Diaz proclaimed that “Bendorf’s poems give us all we have ever wanted, to wake up and feel that the body we are in is ours, that the hands on the ends of our wrists—our body’s gates of tenderness—are large enough to hold in them all the things we have desired.”

Bendorf himself writes: “I’m interested in poetry that invents or cobbles together a vocabulary for all those little loves and miseries between or outside existing taxonomies. We invent when no other kind of structure fits the bill. We do it with tools, with relationship and family structures, with gender, bodies, poems. No name until we name, no form until we shape.”

Born in Iowa, he earned a BA in English from the University of Iowa, an MA in Library and Information Science and an MFA in Poetry from the University of Wisconsin, where he was the Martha Meier Renk Distinguished Graduate Fellow in Poetry, teaching workshops on creative writing, cartooning, and zine-making.
He has presented and taught internationally on topics including visual composition (cartooning, color, infographics, and zines), creative writing, animation, and queer digitality. A recipient of a Lambda Literary Fellowship in Poetry, his writing and comics have appeared in, or are forthcoming from, Alaska Quarterly Review, Best New Poets, Blackbird, Indiana Review, Ninth Letter, The Rumpus, Transgender Studies Quarterly, Troubling the Line: Trans and Genderqueer Poetry and Poetics, and elsewhere. He currently lives in Washington, DC.

I Promised Her My Hands Wouldn’t Get Any Larger

But she’s decided we need to trace them in case I
turn out to be wrong. Every morning she wakes me
with a sheet of paper. In the beginning, she stowed
all the tracings in a folder, until one day I said I’d like
to at least see where this is going, and from that point on
we hung them on the wall chronologically. When I
study them, they look back at me like busted
headlights. I wear my lab coat around the house to
make sure they know who’s observing whom. If we
can ensure records, if we can be diligent in our
testing. I wrap my fingers around her wrist. Nothing
feels smaller yet. Not her, not the kettle nor the key.
If my hands do grow, they should also be the kind
that can start a fire with just a deer in the road.

so it seemed we would at last not have to choose between
gardens and goats and the affection of our neighbors
because we had forgotten to bring any cups of sugar with us
into the spectral wilderness, or eggs. Mostly we wanted just what
we wanted every day: some greenery, a base camp of our own,
& always a better way to remember the poetry
that came in sleep.

Sometimes I mistake the sound of my voice
for a rubber tire on the shoulder of the road.
I mistake my shoulder for an angle formed
by two lines coming together in geometry.
I mistake geometry for the way mothers
are the holy holy holiest of holes in the heart
and I mistake holy for a dried-up plant
rolled into the pages of someone else’s vision.
I am just as full of shit as everyone, incl. you.
And I mistake my fullness for abeyance,
mistake suspension for an early spring
rabbit hiding frozen in the road—I am
not the spring rabbit, I know, but it’s easy
to mistake my ears for tambourines; I am
good at them without expending any effort.
Once I mistook the tart infatuation of a
kumquat for another seedless calamity.
I mistake seeds for nothing all the time.
I mistake time for space, space for freedom,
sparkles in the alley for a sign that our
universe is sentient after all, and loving,
and will take care of those of us who pray
however mistakenly, not on our knees
exactly, but with our hands clasped
that we may be mistaken for believers.
I mistake my hands for belief all the time.
I keep waking up expecting them to be
someone else’s, but so far they’re only
mine, and when I mistake distance for
absence I tend to go astray. Like when
I can’t tell if someone is walking away
from me or toward me until it’s too late
in either direction. I wonder whether coroners
mistake knees for elbows the way my love
loses track of left and right. There are times,
or should I say spaces, in which I mistake
fire for work gloves, which is almost always
a mistake and vice versa. I want a compass.
I need deliverance. Good god, take me,
mistake me back to the soft shoulder,
which I mistake so often for the road itself.