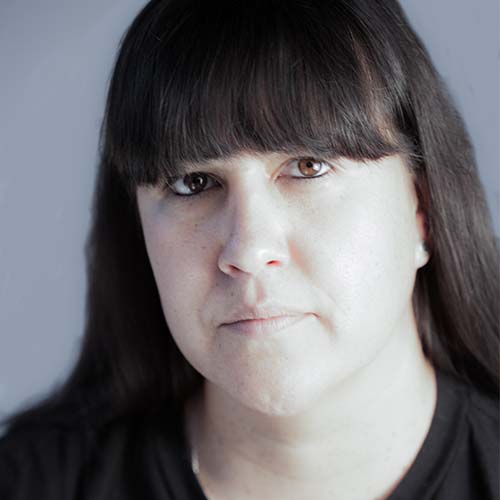 Natalie Diaz’s poetry is raw, rhythmic, and tender. The New York Times called her debut, When My Brother Was an Aztec (2012), an “ambitious… beautiful book.” Pima and Mojave, and an enrolled member of the Gila River Indian community, Diaz was born and raised in the Fort Mojave Indian Village in Needles, California. She earned her BA from Old Dominion University, where she received a full athletic scholarship and majored in English and Women’s Studies. She went on to play basketball professionally in Europe and Asia before returning to Old Dominion to earn an MFA in Creative Writing.

Diaz brings a strikingly authentic and powerful voice to American poetry. She grapples with the big issues on the reservation, imbuing the harsh realities of poverty, teen pregnancy, and meth addiction with honesty and lyricism. As The Rumpus put it, she writes with a “dancer’s grace and a mechanic’s oil-stained hands.” Her images are potent and physical, and she is a formidable lyricist, wielding allusion, metaphor, form and rhythm with muscle and momentum. Diaz acknowledges the despair in these poems, and hopes that her readers “see the beauty and inevitability of our survival.” And while the book teems with colorful characters like Mary Lambert, a star basketball player who drops out of school to be a single mother selling fry bread, it also offers tender moments between lovers and family members, and much humor. Diaz’ view registers much more than any one place or background, however. She both embraces and subverts mythology, simultaneously conveying Mojave, Spanish, and American folklore, and displays impressive rhythmic intuition that seems to mirror basketball: fast-paced, accumulating, and full of wild shifts. The confines of forms like the pantoum and the ghazal seem to grant her the freedom to discover new elements and combinations. “It takes a poet of rare skill and clarity to write a triolet that includes assault arrests, Sisyphus, meth, and Lionel Richie,” writes Adrian Matejka his profile of Diaz for the Poetry Society of America. As she herself has said, “I was raised to hold many truths in my hands,” and she does so gracefully.

Diaz’s work was chosen by Natasha Trethewey to appear in Best New Poets 2007 and has been published in such journals as Prairie Schooner and Iowa Review. Her many awards include the Nimrod/Hardman Pablo Neruda Prize foe Poetry, the Louis Untermeyer Scholarship in Poetry from Bread Loaf, the Narrative Poetry Prize, and a Lannan Literary Fellowship. Diaz currently directs a language revitalization program, where she works with the last four fluent speakers Mojave speakers. The project was highlighted, along with her book, on the “PBS News Hour.”

Naked blue boy put down your pipe. They found your shoes in the meadow. Mom’s and Dad’s hearts are overripe.

Pluck that crimson orb rusted package from the branches mother’s arms our tree you’ve chopped away at for too long with your mouth-bright ax pretty-teethed boy. Chop chop-ping. No stopping this Lost-boy-of-our-wilting-garden. Peter Pan wannabe. Peter be wanna pan. Oh don’t grow up now. Don’t turn away from the gapings on Mama’s trunk. Watch them glow with us electric gashes wounds like hurt-lanterns you’ve lit. Sit Indian-legged under this moon. Hurtling shiny bullet. Hungry boy. Licking your ruby-crusted lips. Fingerpicking father’s red-swelled eyes from where he cowers. A beat bush smoldering with shame. Old men should be allowed to sob in privacy. Turn up the radio. Tune in to the border stations those pirate Mexican heroin melodies. We’ve got to got to got to get back to that stinking garden.

Flyblown figs shimmer at you my bug-eyed boy. The glitzy-bodied flies boogie-woogie to your static grin numbing you while sexy screwworms empty you like a black hole. Ecstasy that must look pretty from inside—to core not just an apple but the entire orchard the family even the dog. Leave the shells to the crows. A field of red lampshades in the dark Garden of Myiasis. This is no cultivated haven. This is the earth riddled with a brother. The furrows are mountains. Waves of sand and we are ships wrecked. What’s left of a fleet of one hundred shadows shattered and bleached. A crop gone to sticks. The honeysuckle sags with bright sour powder. We have followed the flames followed him here where all the black birds in the world have fallen like a shotgun blast to the faded ground. The vines have hardened to worms baking in the desert heat. We are at the gate shaking the gate climbing the gate clanging our cups against the gate. This is no garden. This is my brother and I need a shovel to love him.

I Watch Her Eat the Apple

She twirls it in her left hand,
a small red merry-go-round.

According to the white oval sticker,
she holds apple #4016.
I’ve read in some book or other
of four thousand fifteen fruits she held
before this one, each equally dizzied
by the heat in the tips of her fingers.

She twists the stem, pulls it
like the pin of a grenade, and I just know
somewhere someone is sitting alone on a porch,
bruised, opened up to their wet white ribs,
riddled by her teeth—
lucky.

With her right hand, she lifts the sticker
from the skin. Now,
the apple is more naked than any apple has been
since two bodies first touched the leaves
of ache in the garden.

Maybe her apple is McIntosh, maybe Red Delicious.
I only know it is the color of something I dreamed,
some thing I gave to her after being away
for ten thousand nights.

The apple pulses like a red bird in her hand—
she is setting the red bird free,
but the red bird will not go,
so she pulls it to her face as if to tell it a secret.

She bites, cleaving away a red wing.
The red bird sings. Yes,
she bites the apple and there is music—
a branch breaking, a ship undone by the shore,
a knife making love to a wound, the sweet scrape
of a match lighting the lamp of her mouth.

This blue world has never needed a woman
to eat an apple so badly, to destroy an apple,
to make the apple bone—
and she does it.

I watch her eat the apple.
carve it to the core, and set it, wobbling,
on the table—
a broken bell I beg to wrap my red skin around
until there is no apple,
there is only this woman
who is a city of apples,
there is only me licking the juice
from the streets of her palm.

If there is a god of fruit or things devoured,
and this is all it takes to be beautiful,
the God, please,
let her
eat another apple
tomorrow.

Angels don’t come to the reservation.
Bats, maybe, or owls, boxy mottled things.
Coyotes, too. They all mean the same thing—
death. And death
eats angels, I guess, because I haven’t seen an angel
fly through this valley ever.
Gabriel? Never heard of him. Know a guy named Gabe though—
he came through here on powwow and stayed, typical
Indian. Sure he had wings,
jailbird that he was. He flies around in stolen cars. Wherever he stops,
kids grow like gourds from women’s bellies.
Like I said, no Indian I’ve ever heard of has ever been or seen an angel.
Maybe in a Christmas pageant or something—
Nazarene church holds one every December,
organized by Pastor John’s wife. It’s no wonder
Pastor John’s son is the angel—everyone knows angels are white.
Quit bothering with angels, I say. They’re no good for Indians.
Remember what happened last time
some white god came floating across the ocean?
Truth is, there may be angels, but if there are angels
up there, living on clouds or sitting on thrones across the sea wearing
velvet robes and golden rings, drinking whiskey from silver cups,
we’re better off if they stay rich and fat and ugly and
‘xactly where they are—in their own distant heavens.
You better hope you never see angels on the rez. If you do they’ll be marching you off to
Zion or Oklahoma, or some other hell they’ve mapped out for us.