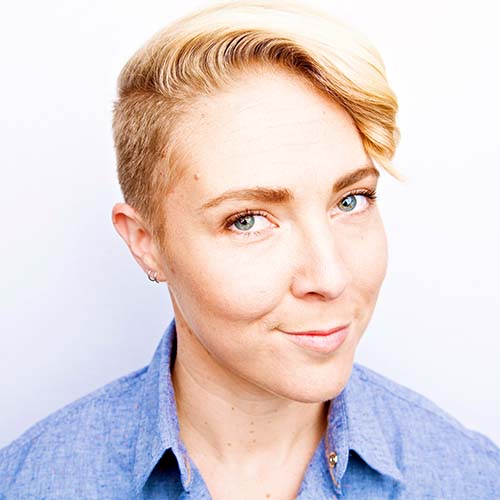 Meg Day’s poems are animated by the idea that bodies and identities are able to persist and thrive in spaces that are often dismissed as waypoints. An allegiance to betweenity and borderland spaces is a constant in Day’s poems; in “When all you have is a hammer, everything looks like a nail”, Day builds a fervent argument against the assertion that “betweenity/merely broadcasts unfinished business.” Day is a stunning biographer of the body’s co-existing selves, and in a poetics statement included the anthology Troubling the Line: Trans & Genderqueer Poetry & Poetics (Nightboat, 2013), the poet affirms a commitment to living in a shifting space: “Yes to being two—or three or four—things at once, yes to existing between identities & among identities & as always shifting identities.”

In the words of D.A. Powell, Meg Day is “a poet whose fearless heart is tethered to the world”, and Day’s work does not turn away from the difficult parts of living: illness, resistance, and grief are everywhere. Even so, Day’s poems are built from divinity, the poet’s “ligaments made of amen.” A scholar of Disability Poetics (and author of a number of ASL poems), Day’s work in this area raises vital questions about access, interpretation, and reproduction of poems across different modes of composition, and aims to bring the work of Deaf poets to a wider audience.

Raised in northern California’s Bay Area, Day has also spent time in southern California and Utah. Day holds a B.A. from the University of California, San Diego, an M.F.A. from Mills College, and a Ph.D. in Literature and Creative Writing with an emphasis on Disability Poetics from the University of Utah where Day was a Steffensen-Cannon Fellow, a United States Point Foundation Scholar, and Poetry Editor for Quarterly West. Day is the recipient of several prestigious honors, including the Amy Lowell Poetry Traveling Scholarship (2015-16) and a National Endowment for the Arts Fellowship in Poetry (2013). Currently, Day is Assistant Professor of English & Creative Writing at Franklin & Marshall College and lives in Pennsylvania.

On Nights When I Am Your Husband

It takes until morning to realize everyone thinks I am
the man you sleep beside at night & scold in daylight
for toilet seats or beard clippings, the man you chose
to bring home bacon & fry it or otherwise participate
in satisfying anachronistic proverbs involving pigs.
Sometimes all it takes is a tie – but more often a suit –
to bind our twosome into something altogether common:
you, in your hourglass & heels, me in my narrow pleats,
I wouldn’t call our camouflage deliberate, I wouldn’t
wake with recognition if it were. But on nights when I am
your husband – & the elderly woman at the symphony
pats my hand & calls me son – I wish I knew how to be
that man, if just for an instant. I wish I knew to turn to you
with the veneration of a spouse, to feel the law make firm
the ground beneath my knees as your brilliance pulls me
to them. Love, I will have you & hold you for all of my days
but on those nights, let the whole house know it
with their failure to notice; let their oversight be our refuge
& let the privilege of our brief ruse unite us, as some
shared reverie would, when morning finally comes.

When They Took Her Breasts, She Dreamt of Icarus

When they took my breasts, I dreamt of Icarus
& woke each hour to the blurry hands & heads
of Briareus in a white coat struggling to keep my arms
from flapping & the mercury in its glass.
They had lost me on the table, or so Icarus said,
& in the slow-motion scramble for paddles
or pulse, we flung our bodies, arms widespread,
& flew a flat line to the sun in crimson exodus.
I, too, am the son of a craftsman, I told him later
at my bedside, a master of time & the pieces that keep it.
We spit, then, & shook palms all wax & feather,
two brothers proved failures in such lineages of merit.
That night he slept behind me, our curved spines yawning
& when the sun rose they punctured both lungs to keep me from
drowning.

When the pain was too much, they gave me Icarus
& he’d sit beside me while they emptied my drains,
or sing refrains of Fugees covers while doodling airplanes
flying close to the sun. He’d question my sutures,
Are you killing him softly with your song? & fall
to the floor in fits of laughter, my smile brighter
when we knew the cancer’d gone. You’ll be lighter
without all that weight, he told me one night from the hall
& I lay alone in the dark watching the IV drip,
knowing he meant breasts and not the tumors that took them,
a flat-chested emblem of our future flight in tandem,
a handsome membership to – no, abandon ship.
I never wanted to be less woman. But I was
more monster than man, a leviathan in gauze.

When he fashioned my new breasts, Icarus did not use wax
or feathers, wristwatches or wings. He used caution & hesitation
& the cauterizing of things; he slapped warning labels on my decision,
instructed judgment to form a line at the door. If you relapse
it’ll be the last time, he continued, miming the surgeon, scalpel in hand.
I’ve always said hubris was stored in the chest & they stitched in my pride,
one bag for each side. Later, when the drains were replaced & the
sutures retied,
he asked if I’d ever thought about death: Pearly gates? A big brass band?
When I die,he said, I hope I go in autumn; I hope I leave
with the heat of the sun still burned brown at my nape
& the thick gusts of equinox searing up under my cape;
I hope there is ocean enough for my scattering, & still sea left to grieve –
O, how I’d come to crave the surprise of death instead of its prediction:
let me be amazed by my departure, let is be some unafflicted eviction.

What I Will Tell His Daughter, When She’s Old Enough to Ask

When they removed the yellow tape
from the doorway, our neckless birds
still sat, unfolding, on the tabletop,

& onto the floor. The chair we’d set
in the middle of the room for hanging
the first twenty attempts at a thousand

seemed frozen mid-bow, all four legs facing
west. He never mentioned his plans
or his grief – only that I could find the fishing

line toward the front, near the large spools
of rope. Don’t go on without me I’d said
& whistled the eleven short blocks

back from the hardware while he folded his apologies
& suspended himself from the ceiling of cranes.