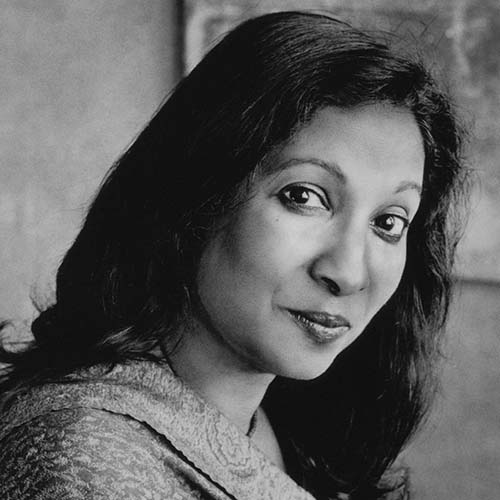 Meena Alexander has called herself a “woman cracked by multiple migrations.” Born in India, raised in Sudan, educated in England, and currently a resident of New York City, she has drawn on experiences of trauma, exile, conflicting identity, and the customs of four continents to produce eight books of poetry, a memoir, and two novels. As she has said, “All my writing is haunted by place, the loss of it, the constantly shifting ‘I’ that tries to find a place in which to be.” Alexander’s “I” finds place in her gift of evocation, in its power to coax life out of a rock and to construct a sanctuary from a single memory. In Maxine Hong Kingston’s words, “Her voice guides us far away and back home. Her reader sees her visions and remembers and is uplifted.”

Alexander believes in the power of memory to mend wounds, to “recreate ancestry.” She sees writing an act of translation, bearing what is unspoken and even unspeakable into language, and reawakening a piece of the past as a fresh experience. Her work is a sensual hybrid that draws from the Western romantic tradition as well as Bhakti and Sufi heritage. Among her literary influences she cites the Indian poets Jayanta Mahapatra and Kamala Das, as well as Adrienne Rich and Galway Kinnell. While her poems contain echoes of the ritual or mythological, intense self-reflection is their core.

Focusing on the fault lines and fractures between one culture and another, her rich verse on such vital issues as love, dislocation, terrorism, and fanaticism sparks a vital discourse at the intersection of ethnic American, post-colonial, and women’s studies. In the poem “Question Time,” she is asked, “What use is poetry?” Her response: “We have poetry so we do not die of history.” For Alexander, the task of poetry is to reconcile to a violent and unjust world, to make beauty of life’s challenges, rendering it somehow survivable. There is a sensuous grandeur in what results, which has the dual power of being both intimate and universal. Tracy K. Smith praised Birthplace of Buried Stones, her most recent collection, for delivering us “into the presence of a stark beauty capable of swallowing us whole.”

Alexander’s work has been translated into Malayalam, Hindi, German, Swedish, Arabic and Spanish. Her volume of poetry, Illiterate Heart, was the PEN Open Book winner in 2002, and she has received awards from such institutions as the Guggenheim Foundation, the Fulbright Foundation, the Rockefeller Foundation, the Arts Council of England, the South Asian Literary Association and the National Endowment for the Humanities. A graduate of Khartoum University and University of Nottingham, she has taught at Brown, Columbia, the Sorbonne, and the University of Hyderabad among others. She currently teaches at Hunter College and the City University of New York.

Yusef Komunyakaa has called acclaimed poet Meena Alexander a “truth-teller who knows how to make language do anything and everything she desires.”

Out of a pothole a child pokes her head.
Rocks prance under water,

Sunlight burns a hole in air
Fit for a house to fall through.

Palm trees dive into indigo.
Where is Kochi now?

Out on the deck men raise glasses of cognac,
Women in chiffon saris

And hunks of burlap to sleep in.
Between sari hems and polished toes,

The child sees flying fish
Vomited by the sea–

Sea salt clings to them.
The sea has no custom, no ceremony.

It makes a theater for poetry,
For a voice that splits into two, three:

Drunken migrations of the soul.
No compass to the sea. The sea is memory.

I remember the scarred spine
Of mountains the moon slips through,

Fox fire in a stump, bushes red with blisters,
Her question, a woman in a sweatshirt,

Hand raised in a crowded room-
What use is poetry?

Above us, lights flickered,
Something wrong with the wiring.

I turned and saw the moon whirl in water,
The Rockies struck with a mauve light,

Sea creatures cut into sky foliage.
In the shadow of a shrub once you and I

Brushed lips and thighs,
Dreamt of a past that frees its prisoners.

Standing apart I looked at her and said-
We have poetry

So we do not die of history.
I had no idea what I meant.

A penurious thing.
All I had was our breath, an unsteady pulsing

With holes enough
For a swallow to fly through.

I remember one in our room
Hovering by the portrait of someone else’s ancestors,

A girl skirts askew, eyes half shut,
Seated on a tricycle.

Behind her, hands cradling her shoulders,
A boy bruised by paint.

The bird swam by the gilt ceiling
Then startled, dashed itself against the window frame.

After the beating wings were done
Hills clarified in darkness,

Bits of light fell from the sky.
We watched not knowing what it all was,

The air hurting us into happiness
We never really thought was possible.