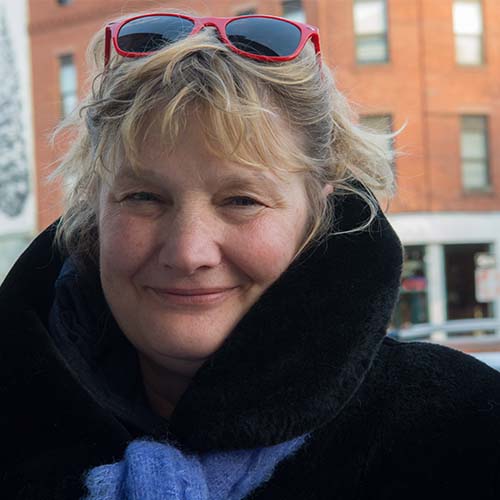 A long-time devotee of the prose poem, Mary A. Koncel has published three books of them, Closer to Day (Quale Press), You Can Tell the Horse Anything (Tupelo Press), and The Last Blonde, brand new from Hedgerow Books in 2017. The recipient of a poetry fellowship from the Massachusetts Cultural Council and a finalist for the Poetry Society of America’s Norma Farber First Book Award, her work has appeared in The Massachusetts Review, Barrow Street, Prose Poem: An International Journal, as well as the anthology No Boundaries: Prose Poems by 25 American Poets.

Koncel’s prose poems are tightly focused mini-dramas of whimsy and poignancy. Using an eccentric array of voices, both human and animal, she blurs the line between the commonplace and the absurd, finding emotional touchstones in the most surreal situations. The American Book Review has described Koncel as a prose poet “whose combination of dark humor and lyricism, world-weariness and wonder, not only avoids cynical retreat but also assures readers that allowing life to act upon them is the essential task at hand.” Her poems amplify the small movements of daily life we think we recognize – driving home, insomnia, lying in bed next to a lover, and transform them into moments where we hold our breaths.

While her work might be described as surreal or absurd, Koncel resists the label. “I think of [my characters] as teetering on the outer edge of reality,” she writes. Her poems, “microcosms of our own lives,” as she calls them, “remind us of our tenuous place in a world that is easily turned on its side.” Poet Maxine Chernoff calls Koncel “the Edward Hopper of prose poems, the geographer of lonely human landscapes where the light is all wrong and human loneliness overwhelming. But just as we are going to despair, she finds a bright corner in which something extraordinary takes place.” As poet Lee Upton puts it, “Mary Koncel can tell us anything, and we’ll listen—for each tender, quirky, wild and assured discovery from one of our premier prose poets.”

Koncel was born and raised in Chicago, where she completed her BFA in poetry at Columbia College, before coming east to the University of Massachusetts at Amherst, where she took an MFA in English. She also has a MS in Animals and Public Policy. A former instructor at the Jacobson Center for Writing at Smith, she is an avid dressage rider and now works as a program specialist with the America Wild Horse Campaign.

In Bulgaria, certain womanly body parts are known as womanly body parts.
Listen. I have a theory. In the beginning, all women were conceived in Bulgaria. On day one, rain flooded their dreams, so they banged tin pots and rode between rocks, skirts spread across the necks of sullen donkeys. On day two, they took hard names. Come closer. I will whisper to you because I respect the lucidity of tongues, because I know that desire never begins without incident. My proof, you ask? In The Big Book of Womanly Body Parts, a good man, like you, stands behind a woman, like me. She sits, writing about grapes and too much sun. Now turn the page. Watch him rest a hand on her shoulder as he thinks how easily skin can meet skin, his fingers drifting open and down the wake of her back.

Letters to the Husband #85

Our children are dirty. I have no time to bathe them. They are growing quickly. They eat too much. When I cannot sleep, when I hear them rooting in the damp of the garden, I remember our choices: hide them; stack them head to toe – boy, girl, boy, girl; pretend they are not our children. In the dark, no one will notice. They are good, but dirty children. They have your fingertips, my aversion to water and unrehearsed pleasure. Let us promise not to beat them. Let us praise them for their dexterity. As if in a prayer. Or lament. Did I mention that they squat around me like tiny tree toads? Except for the blonde one. She will never learn to pick up a comb. I fear her. She bares her teeth. She holds bees between her lips, sucks out their honey. Don’t blame me. I am mere morsel. In time I will writer her: Dear, Dear Daughter, how have we raised you? How have we failed you?

You can tell the horse anything. You can tell him about the weather, fancy lace underpants, bored neighbors with fat tender stares. The horse will listen. He’ll ease himself into the corner of the stall, flick back an ear, scratch a leg, or toss through his hay. In the pasture, summer wafts between the fence posts, and clover is booming again. But the horse will stay. You can tell him about your head, how it aches when you see bare trees and remember a red-haired child, pale and breathless in her shadow. The horse’ll nod. He will listen as you untangle his forelock, rub his belly, feed him a handful of sugar cubes and maybe a pear. You can tell him that nothing matters to you, nothing. Oh horse, you’ll whisper, because you are so happy, because the day is long, and the horse is snorting.

From YOU CAN TELL THE HORSE ANYTHING (Tupelo Press, 2003)