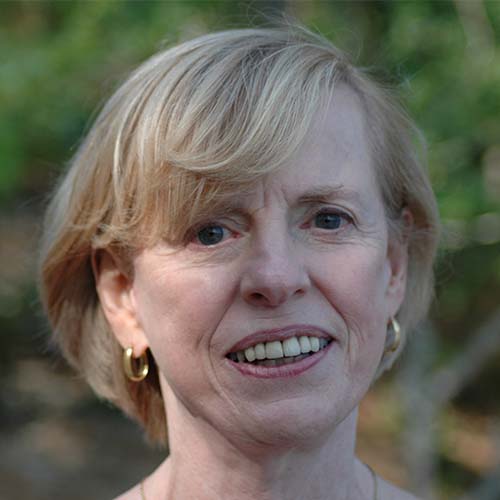 Born in Omaha, Nebraska, Martha Collins earned a B.A. at Stanford University and holds a Ph.D. from the University of Iowa. Following in the courageous vein of Blue Front, her book-length poem about a lynching witnessed by her father in 1909, Collins’s most recent collection, White Papers, addresses what it means to be “white” in a multi-racial society that continues to live under the influence of its deeply racist past. Thomas Sayers Ellis has written: “White Papers is that difficult beginning, the one beneath traditional poetic confessions of written Whiteness. Martha Collins transforms the history of America’s troubled racial roots and, most importantly, her own, into a slide show of non-capitalized flesh. This book is the one we knew was out there but had rarely read. It is an honest and powerful half-portrait, leaning into its own brave profile.”

Collins has said that she was drawn to poetry, rather than prose, because she’s always been “uncomfortable with certainty.” This is reflected in her style, known for its use of fragmentation, stretched and broken syntax, and a kind of stuttering, morphing repetition. But, unlike the work of traditional “language poets,” Collins’s poems do not take language as their subject; instead, they wrestle with injustice, domestic violence, political deception, and war. Much of the urgency and power of Blue Front, White Papers, and four earlier volumes, derives from the fact that rather than approaching these subjects frontally, she does so in an open, exploratory manner.

Collins’s new collection, Day Unto Day was released in 2014. She also co-translated poems from the Vietnamese, with two books in print, The Women Carry River Waterby Nguyen Quang Thieu and Green Rice by Lam Thi My Da, and a third, Black Stars: Poems by Ngo Tu Lap, is forthcoming.

Founder of the Creative Writing Program at UMass-Boston, Martha Collins spent ten years as Pauline Delaney Professor of Creative Writing at Oberlin College and is currently an editor of the Oberlin College Press in addition to her position as editor-at- large for FIELD magazine. Her honors include fellowships from the National Endowment for the Arts, the Ingram Merrill Foundation, the National Endowment for the Humanities, and the Bunting Institute, as well as a Witter Bynner Grant for translation, and a Lannan Foundation Residency Grant. She lives in Cambridge, Massachusetts.

not as in pin, the kind that keeps the wheels
turning, and not the strip of land that marks
the border between two fields. unrelated
to link, as in chain, or by extension whatever
connects one part to another, and therefore
not a measure of chain, which in any
case is less than the span of a hand hold-
ing the reins, the rope, the hoe, or taking
something like justice into itself, as when
a captain turned judge and gave it his name.
that was before it lost its balance and crossed
the border, the massed body of undoers
claiming connection, relation, an intimate
right to the prized parts, to the body undone.

and if I look at your face your hands your
triumphant or suffering body and do not
see, if the mirror neurons that make
me experience another’s actions
as my own do not fire