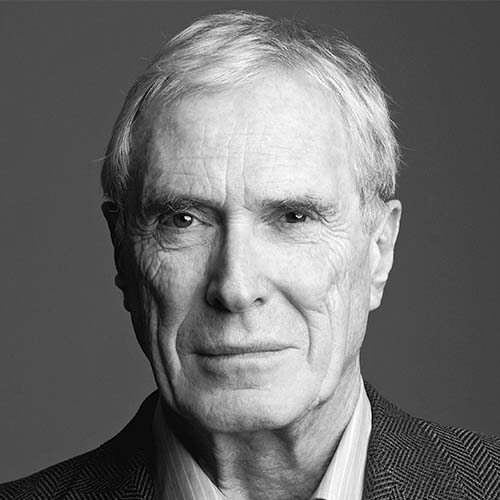 Mark Strand’s poems are known for clarity and a deeply inward sense of language. He has been described as existential, playful, mysterious—a poet of simple words and sentences that add up to powerful universal experiences, whether the subject is “delirious” dancing, oldsters on a nursing home porch, the last seven words of Christ, or dreams of pink bulls and Hollywood stars. With his incantatory language and radiant imagery, he creates mythic scenes that, however otherworldly, are ultimately of this earth: their underlying subject is the pain and pleasure of being mortal.

The New York Times Book Review praised Strand’s work for its “shimmering sense of the infinite,” adding that “his apparently simple lines have the eerie, seductive ring of the inevitable.” Donna Seaman, in her Booklist review of Strand’s latest book, Man and Camel (Knopf 2006), calls Strand “a riddler, at once vatic and comedic” and “a fabulist in the manner of Borges and Calvino.” Poetry magazine has said of his work: “It is hard to think of a poet whose ambition so consistently matches his execution. To read through Strand from his first book through the present is to see a single course pursued with exquisite precision.”

A former US Poet Laureate, Strand is the author of eleven books of poems, including Blizzard of One, which won the Pulitzer Prize for poetry in 1999. He has authored a collection of short stories, several volumes of translations, anthologies, three children’s books and several monographs on contemporary artists, as well.

It was clear when I left the party
That though I was over eighty I still had
A beautiful body. The moon shone down as it will
On moments of deep introspection. The wind held its breath.
And look, somebody left a mirror leaning against a tree.
Making sure that I was alone, I took off my shirt.
The flowers of bear grass nodded their moonwashed heads.
I took off my pants and the magpies circled the redwoods.
Down in the valley the creaking river was flowing once more.
How strange that I should stand in the wilds alone with my body.
I know what you are thinking. I was like you once. But now
With so much before me, so many emerald trees, and
Weed-whitened fields, mountains and lakes, how could I not
Be only myself, this dream of flesh, from moment to moment?

It shines in the garden,
in the white foliage of the chestnut tree,
in the brim of my father’s hat
as he walks on the gravel.

In the garden suspended in time
my mother sits in a redwood chair;
light fills the sky,the folds of her dress,
the roses tangled beside her.

And when my father bends
to whisper in her ear,
when they rise to leave
and the swallows dip and dart
and the moon and stars
have drifted off together, it shines.

Even as you lean over this page,
late and alone, it shines; even now
in the moment before it disappears.

Let it be anywhere
on any night you wish,
in your room that is empty and dark

or down the street
or at those dim frontiers
you barely see, barely dream of.

You will not feel desire,
nothing will warn you,
no sudden wind, no stillness of air.

She will appear,
looking like someone you knew:
the friend who wasted her life,

the girl who sat under the palm tree.
Her bracelets will glitter,
becoming the lights

of a village you turned from years ago.