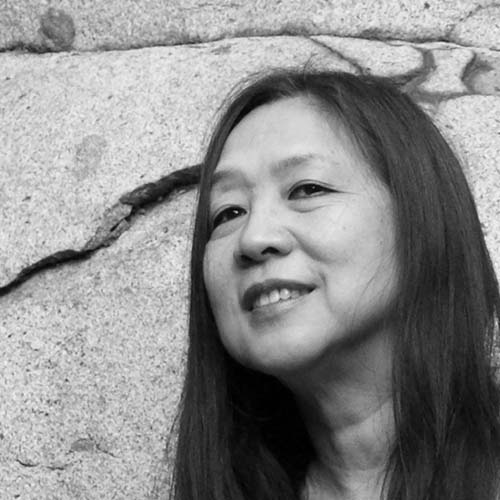 A self-described activist poet, Marilyn Chin has always been a poet with eyes wide open. The year after her first book of poetry, Dwarf Bamboo, was published, she told an interviewer: “I don’t quite believe in art for art’s sake. I believe there must be a higher order.” Her most recent book, Hard Love Province, is a testament to this unwavering dedication—and also a winner of the 2015 Anisfield-Wolf Book Award for poetry, which honors books that confront racism and examine diversity. Previous Anisfield-Wolf Award winners include civil rights icons Malcolm X, Toni Morrison, Martin Luther King, Jr., and Gwendolyn Brooks. Like them, Chin is fearless and pointed. Her poetry ranges from humorous to heart-wrenching, all the while maintaining a deep and close engagement with the world around her.

Born in Hong Kong as Mei Ling Chin, she was raised in Portland, Oregon as Marilyn, her transliterated name. In the biting poem “How I Got That Name,” she attributes the re-christening to her father’s obsession with Marilyn Monroe. Chin’s work is enriched and empowered by this racial and cultural double-consciousness. Commenting on her surprising, matter-of-fact fierceness, John Yau wrote that the “toughness in Chin’s poems is something we have yet to reckon with.” Refusing to choose between the personal and the political, there is nothing too small, difficult, ugly, or un-poetic for this brazenly vulnerable writer—Tabasco, the Virgin Mary, and faux-Prada shoes sit tumultuously but somehow agreeably together in “From a Notebook of an Ex-Revolutionary.” This is poetry crafted at intersections, “both ancient and modern …transparent and mystifying,” in the words of Henri Cole. Weaving together Eastern and Western literary arts, deliberately layering the forms, content, and rhythms that characterize each tradition, she is, as she says, asking the reader to “…hear Chinese poetry but…also hear Tennyson.”

Author of four books of poetry, Dwarf Bamboo (1997), The Phoenix Gone, the Terrace Empty (1994), Rhapsody in Plain Yellow (2009), and Hard Love Province, the far-reaching elegy released last year, Chin has also published a novel, Revenge of the Mooncake Vixen (2009), and contributed to numerous anthologies, including Asian-American Poetry: The Next Generation, and Dissident Song: A Contemporary Asian Anthology. In addition, she has translated the Chinese poet Ai Qing and co-translated the Japanese poet Gōzō Yoshimasu. A graduate of the University of Massachusetts, Amherst, and the Iowa Writers Workshop, Chin’s many awards and fellowships include a Stegner Fellowship, the PEN/Josephine Miles Award, four Pushcart Prizes, the Paterson Prize, and a Fulbright Scholarship to Taiwan. She has taught classes and workshops worldwide, including a long stint at San Diego State University, where she also co-directed the MFA program. Recently, she took early retirement from SDSU to give more time to her writing, both poetry and prose. Chin serves as Conkling Visiting Poet here at Smith for Spring 2016 and 2017.

Love, if I could give you the eternal summer sun
or China back her early ideological splendor, I would.
If I could hoist the dead horses back
and retrieve the wisdom charred by the pyres of Ch’in.
If I could give Mother the Hong Kong of her mulberry youth
and Father the answer that the ox desired,
they would still be together now and not blame
their sadness on the unyieldy earth.

If I had separated goose from gander, goose from gander,
the question of monogamy and breeding for life, the question
of the pure yellow seed would not enter.
This courtyard, this fortress,
this alluvium where the dead leave their faces-
each step I take erases the remnants of another,
each song I sing obfuscates the song of Changan,
ripples washing sand ripples washing sand ripples.
each poem I write conjures the dead washing-women of Loyang.
Lover, on Tiananmen Square, near the Avenue of Eternal Peace,
I believe in the passions of youth,
I believe in eternal spring.

As the white blossoms, sweet harbingers,
pull a wreath around the city,
as heaven spreads its blue indifference over
the bloodied quay, I want to hold you
against the soft silhouettes of my people.
Let me place my mouth over your mouth,
let me breathe life into your life,
let me summon the paired connubial geese
from the far reaches of the galaxy
to soar over the red spokes of the sun’s slow chariot
and begin again.

From THE PHOENIX GONE, THE TERRACE EMPTY (Milkweed Editions, 1994)

Tonight while the Stars are Shimmering

A burst of red hibiscus on the hill
A dahlia-blue silence chills the path
Compassion falters on highway 8
Between La Jolla and Julian you are sad
Across the Del Mar shores I ponder my dead mother
Between heaven and earth, a pesky brown gull
The sky is green where it meets the ocean
You’re the master of subterfuge, my love
A plume of foul orange from a duster plane
I wonder what poison he is releasing, you say
A steep wall of wildflowers, perhaps verbena
Purple so bright they mock the robes of God.

In Feudal China you would’ve been drowned at birth
In India charred for a better dowry
How was I saved on that boat of freedom
To be anointed here on the prayer mat of your love?
High humidity, humiliation on the terrain
Oi, you can’t describe the ocean to the well frog
I call you racist, you call me racist
Now, we’re entering forbidden territory
I call you sexist, you call me a fool
And compare the canyons to breasts, anyway
I pull your hair, you bite my nape
We make mad love until birdsong morning

You tear off your shirt, you cry out to the moon
In the avocado grove you find peaches
You curse on the precipice, I weep near the sea
The Tribune says NOBODY WILL MARRY YOU
YOU’RE ALREADY FORTY
My mother followed a cockcrow, my granny a dog
Their palms arranged my destiny
Look, there’s Orion, look, the Dog Star,
Sorry, your majesty, your poetry has lost its duende
Look, baby, baby, stop the car
A mouse and a kitty hawk, they are dancing

Yellow-mauve marguerites close their faces at dusk
Behind the iron gate, a jasmine breeze
In life we share a pink quilt, in death a blue vault
Shall we cease this redress, this wasteful ransom?
Your coffee is bitter, your spaghetti is sad
Is there no ending this colloquy?
Ms. Lookeast, Ms. Lookeast
What have we accomplished this century?
I take your olive branch deep within me
A white man’s guilt, a white man’s love
Tonight while the stars are shimmering

Quiet the Dog, Tether the Pony