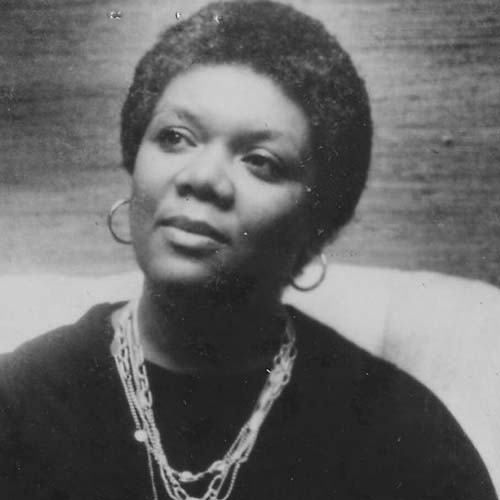 Lucille Clifton is one of the most beloved and respected figures in American poetry today. A major voice since her publishing debut in 1969, she has continued to portray the experiences of being an African-American, a woman, and a human with clarity and elegance. Her language, often described as “deceptively simple,” strikes a nuanced balance between complexity of thought and economy of words.

Born in Depew, New York, Clifton attended both Howard University (where she met future luminaries Toni Morrison and James Baldwin) and Fredonia State Teachers College (now SUNY-Fredonia). She is the author of a dozen books of poetry and prose and almost twenty children’s books, including the Everett Anderson series. The New York Times named her first book of poems, Good Times, one of the ten best books of 1969. Subsequent books include An Ordinary Woman, Good Woman, Quilting, and, most recently, Blessing the Boats: New and Selected Poems, 1988-2000, which won the National Book Award. Clifton is the only poet to have two books nominated for the Pulitzer at once (Next and Good Woman: Poems and a Memoir, 1969-1980).

Clifton’s family figures prominently in her poetry, from her six children to the African ancestors who were brought to America as slaves. Her great-grandmother, Lucille (for whom she is named), killed the white father of her children and earned the “dignity” of being the first black woman legally hanged in Virginia. Clifton’s poems exploring this legacy are often arresting, and reveal what Hank Lazer calls the “simultaneously political and aesthetic” achievement of her work. In “light,” complex historical experience informs a personal revelation:

she calls the light,
which was the name
of the grandmother
who waited by the crossroads
in virginia
and shot the whiteman off his horse,
killing the killer of sons.
light breaks from her life
to her lives.
mine already is an afrikan name.

Haki Madhubuti writes of Clifton, “Lucille Clifton is a poet of mean talent who has not let her gifts separate her from the work at hand. She is a teacher and an example. To read her is to give birth to bright seasons”.

Clifton was a Distinguished Professor of Humanities at St. Mary’s College of Maryland, where she was Poet Laureate for many years.

whatever slid into my mother’s room that
late june night, tapping her great belly,
summoned me out roundheaded and unsmiling.
is this the moon, my father used to grin.
cradling me? it was the moon
but nobody knew it then.

the moon understands dark places.
the moon has secrets of her own.
she holds what light she can.

we girls were ten years old and giggling
in our hand-me-downs. we wanted breasts,
pretended that we had them, tissued
our undershirts. jay johnson is teaching
me to french kiss, ella bragged, who
is teaching you? how do you say; my father?

the moon is queen of everything.
she rules the oceans, rivers, rain.
when I am asked whose tears these are
I always blame the moon.

the photograph: a lynching

is it the cut glass
of their eyes
looking up toward
the new gnarled branch
of the black man
hanging from a tree?

is it the white milk pleated
collar of the woman
smiling toward the camera,
her fingers loose around
a christian cross drooping
against her breast?

is it all of us
captured by history into an
accurate album? will we be
required to view it together
under a gathering sky?

it is hard to remain human on a day
when birds perch weeping
in the trees and the squirrel eyes
do not look away but the dog ones do
in pity.
another child has killed a child
and i catch myself relieved that they are
white and i might understand except
that i am tired of understanding.
if this
alphabet could speak its own tongue
it would be all symbol surely;
the cat would hunch across the long table
and that would mean time is catching up,
and the spindle fish would run to ground
and that would mean the end is coming
and the grains of dust would gather themselves
along the streets and spell out:
these too are your children this too is your child