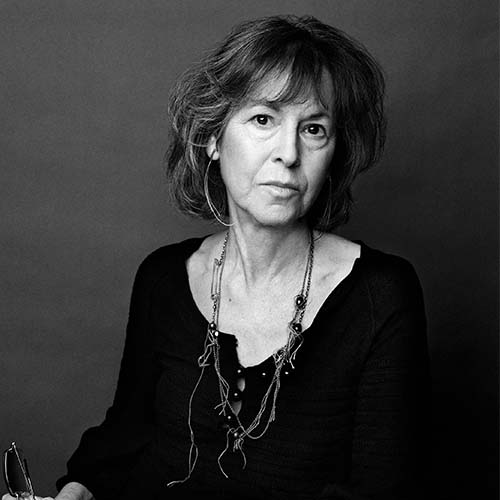 Louise Glück’s exquisitely controlled book-length lyric sequences dazzle and disturb. Each of her nine collections marks a striking departure from its predecessor, and this remarkable body of work has won her wide and resounding praise.

A Chancellor of the Academy of American Poets, Glück has received countless distinguished honors, including the Bollingen Poetry Prize and the Pulitzer Prize, the National Book Critics Circle Award, the William Carlos Williams Award, and a Lannan Literary Award for Poetry.

As the poet Tony Hoagland writes, praising Glück’s intellectual and passionate intensity, “No one sings the song of intoxicated singularity of consciousness like her, or better gives voice to the most fundamental fractures of human nature.” In language is as deceptively simple as it is technically precise, Glück’s work describes the ironies of the human condition through the humble, jarringly austere voices of myth, of wind and witchgrass. Despite the simplicity of her syntax, her poems are renowned for their elegance and analytic depth, their hard questions, their harrowing examination of human life and growth. Glück challenges her readers and herself at every turn with spare, darkly poignant lines, and as critic Helen Vendler writes, her daring yet humble assertions reach the level of “spiritual prophecy—a tone that not many women have the courage to claim.”

Glück’s triumph amidst the ironic and bleak world she describes is the creative act; out of the depths comes a poem that illuminates the darkness it describes. Poetry, for her, is an insistent bloom against the black: as she writes in The Wild Iris, “from the center of my life came / a great fountain, deep blue / shadows on azure seawater.”

Louise Glück has taught at Brandeis, Harvard, and the University of California. Currently the series judge for the Yale Series of Younger Poets and Poet Laureate of the U.S.(2003-2005), she lives in Cambridge, Massachusetts, and teaches at Williams College and Yale University.

Little soul, little perpetually undressed one,
do now as I bid you, climb
the shelf-like branches of the spruce tree;
wait at the top, attentive, like
a sentry or look-out. He will be home soon;
it behooves you to be
generous. You have not been completely
perfect either; with your troublesome body
you have done things you shouldn’t
discuss in poems. Therefore
call out to him over the open water, over the bright water
with your dark song, with your grasping,
unnatural song—passionate,
like Marie Callas. Who
wouldn’t want you? Whose most demonic appetite
could you possibly fail to answer? Soon
he will return from wherever he goes in the meantime,
suntanned from his time away, wanting
his grilled chicken. Ah, you must greet him,
you must shake the boughs of the tree
to get his attention,
but carefully, carefully, lest
his beautiful face be marred
by too many falling needles.

My mother wants to know
why, if I hate
family so much,
I went ahead and
had one. I don’t
answer my mother.
What I hated
was being a child,
having no choice about
what people I loved.

I don’t love my son
the way I meant to love him.
I thought I’d be
the lover of orchids who finds
red trillium growing
in the pine shade, and doesn’t
touch it, doesn’t need
to possess it. What I am
is the scientist,
who comes to that flower
with a magnifying glass
and doesn’t leave, though
the sun burns a brown
circle of grass around
the flower. Which is
more or less the way
my mother loved me.

I must learn
to forgive my mother,
now that I am helpless
to spare my son.

Something
comes into the world unwelcome
calling disorder, disorder—

If you hate me so much
don’t bother to give me
a name: do you need
one more slur
in your language, another
way to blame
one tribe for everything—

as we both know,
if you worship
one god, you only need
one enemy—

I’m not the enemy.
Only a ruse to ignore
what you see happening
right here in this bed,
a little paradigm
of failure. One of your precious flowers
dies here almost every day
and you can’t rest until
you attack the cause, meaning
whatever is left, whatever
happens to be sturdier
than your personal passion—

It was not meant
to last forever in the real world.
But why admit that, when you can go on
doing what you always do,
mourning and laying blame,
always the two together.

I don’t need your praise
to survive. I was here first,
before you were here, before
you ever planted a garden.
And I’ll be here when only the sun and moon
are left, and the sea, and the wide field.

I will constitute the field.