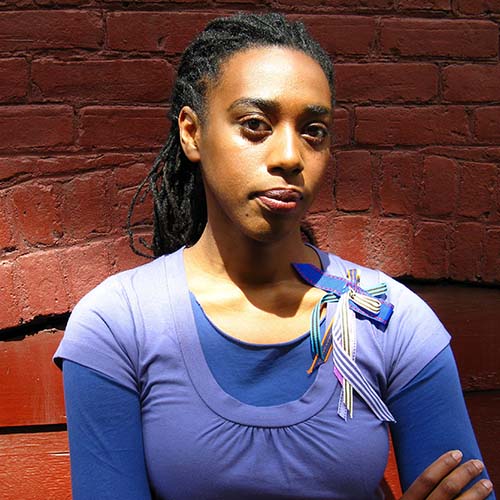 The Smith College Sophian called Lenelle Moïse “a slam-style poet, playwright, actor, author and queer feminist [who] fuses issues of race, class, gender, sexuality and politics.” Moïse, who experiments with collage as a visual medium, is truly a “genre-b(1)ending artist” in all endeavors. Her work is part love song, part battle cry, rich sounds dancing and clanging against each other. Driven by fierce momentum, her voice blurs the line between harsh-tongued hip-hop and intimate whisper.

A Haitan-American, self-identified “culturally hyphenated pomosexual poet,” Moïse has published poems and essays in several journals and anthologies, among them Utne Reader, Word Warriors: 35 Women Leaders in the Spoken Word Revolution, and We Don’t Need Another Wave: Dispatches from the Next Generation of Feminists.

Moïse received an MFA in Playwriting from Smith in 2004, and regularly performs at colleges, theaters, and festivals across the USA and Canada, including guest appearances at the United Nations, the Louisiana Superdome and the Omega Institute. “Expatriate” launched to critical acclaim Off-Broadway at the Culture Project in 2008, and Moïse was also a contributing writer for We Got Issues, a “performance-based dialogue” produced by Eve Ensler, Jane Fonda and the Next Wave of Women in Power. This past summer she premiered her tenth play, Merit, at the Hedgerbrook Women Playwrights Festival.

Among her many honors are 2003 New WORLD Theater Poetry Slam Champion, the James Baldwin Memorial Award in Playwriting (2003 and 2004), the Patchwork Majority Radio Award for Best Solo Album of 2007 for Madivinez, and the 2009-2010 Astraea Lesbian Writers Fund Award in Poetry. Most recently, she was named Poet Laureate of Northampton, MA, for 2010-2012.

aside from faith,
as far as you know,
you will never have another heart.
better to grow the one you were born with.
fill it with blood & love. risk.
let the strange world sneak inside.
accept all of life in your chest.
death is the end of percussion.
breathe deeply, the music
will function. listen close.
freedom thaws in your ribcage.
dance with vehemence
to feel its fast-pumping.
tempt two lips to greet your throat
& take note: your racing pulse
will laugh & kiss back. god is strong
in the clock of your desire.
every tick, my friend, divine
confirmation: you are alive. beat. yes!
you are alive