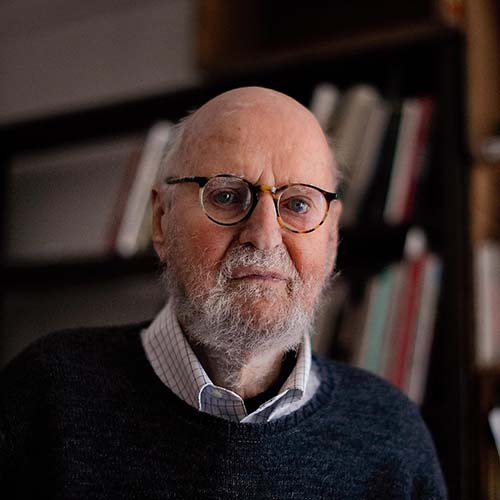 Lawrence Ferlinghetti helped to spark the San Francisco literary renaissance of the 1950’s and the subsequent Beat movement in American poetry, and he’s still going strong, having served as first Poet Laureate of San Francisco (1998-1999) and continuing to write a weekly column, “Poetry as News,” for the San Francisco Chronicle.

Of Ferlinghetti’s own poetry, best-known is the ever-popular A Coney Island of the Mind (1958); having sold well over a million copies, it is one of the country’s best-selling books of poems. Other volumes include Starting from San Francisco (1961), The Secret Meaning of Things (1969), Landscapes of Living and Dying (1979), These Are My Rivers (1993), and A Far Rockaway of the Heart (1997), which is a sequel to Coney Island (forty years later), and consists of 101 poems as unrepentant and exultant as ever, defying popular notions and reflecting the influence of jazz and the American idiom. How to Paint Sunlight, Ferlinghetti’s fourteenth collection of poems, is being released by New Directions this month.

Unbeknownst to most of the literary world, Ferlinghetti has been a serious and obsessive painter since 1948, and in recent years has had a number of exhibitions, including a major show in Italy. At the age of 82, this ageless radical and true bard comes to Northampton direct from Greece, where he was one of a select group asked to read a poem to the Delphic Oracle on the occasion of the spring solstice.

Wild Dreams of a New Beginning