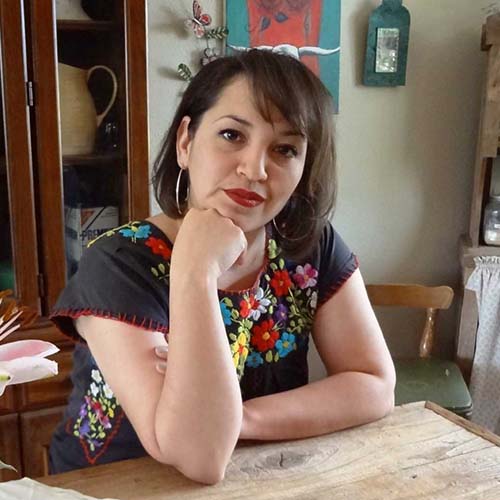 Born and raised in Southside San Antonio, Laurie Ann Guerrero writes poetry that is both universal and local, returning us always to the many vitalities of the body, that ever-present reserve of the imagination. In the words of Martín Espada, “Guerrero writes in a language of the body, visceral, almost unbearably vivid, the language of a poet who knows how to work with her hands . . . .” Her first full-length collection, A Tongue in the Mouth of the Dying, was selected winner of the 2012 Andrés Montoya Poetry Prize by Francisco X Alarcon and released by the University of Notre Dame Press in 2013. In this first book of what Nikky Finney has called “dazzling, edgy, irascible poems,” Guerrero conjures the life-giving powers of the tongue, honing a body of work that resists definition and instead welcomes a rich multiplicity of meanings and plurality of voices.

Centered around the lives and stories of hard-working women, Guerrero’s collection delivers us to a place of potent ferocity— a place that lies in-between worlds: languages, allegiances, spiritualities, and ancestors. She writes skillfully of womanhood, motherhood and family, excavating and recovering some of the histories of those around her. Ross Gay has praised her work, writing, “In poems crafted with tremendous skill, Laurie Ann Guerrero’s A Tongue in the Mouth of the Dying explores, so often, the ways in which the colonized or poor or brown have been brutalized, and their stories written by the conquerors. But . . . the re-writing has begun. This is a powerful, necessary book.”

An Ada Comstock Scholar at Smith College, Guerrero earned a B.A. in English Language & Literature and went on to complete her MFA in Poetry from Drew University. Her chapbook, Babies Under the Skin (2008), won the Panhandler Publishing Award, chosen by Naomi Shihab Nye. Her poetry and critical work have appeared in a number of journals, including Huizache, Texas Monthly, Acentos Review, Women’s Studies Quarterly, Palo Alto Review, Global City Review, Texas Observer, Meridians: feminism, race, transnationalism, Feminist Studies and others. A CantoMundo fellow and member of the Macondo Writers’ Workshop, Guerrero has served on the faculty at University of the Incarnate Word, University of Texas-El Paso, Palo Alto College, and Gemini Ink, a community-centered literary arts organization in San Antonio.

A Meal for the Tribe

Let me never go blind or get cut off
from the agony of learning.
–Sylvia Plath, Smith College, class of 1955

There is no eating without feeding, my mother
always said. The hunger is numbing.
I near enough to tease the tongue, sit at a table
with thin sheets of people and slip bursting,
purpled berries like rubies into a pouch on my lap:
crimson bombs in a seeping paper bag.

They’re roosters! she corrects me. Chubby cocks hang above our heads from the ruffle of curtain in the room where her children eat. In her kitchen, next door to the house where I used to live, she laughs in two-step, pops a couple of XX con lima. I’ve missed you, neighbor, I say, peering through her window into the kitchen I used to cook in—next door—looking for the painting I left behind, the curtains I sewed, looking to see if I damaged the counters with an imprint of my ass, wondering if my DNA might show up if detectives ever needed samples: is my hair wound tightly in that carpet, skin flakes painted into that red door? Neighbor tells me the new woman next door has a baby that cries all night, and when the man struts home at 4 in the morning, he crows like a mad man. Our beer is ceremony. We talk about Maria: Remember her? Her baby, Louis? Her husband? Did you know she was pregnant when he killed her? That he killed the boy first, in front of her? Our children rush through the kitchen, paletas in hand, to the backyard with men who love us today. Passing the sal con limón, we pray for the woman next door, hoping blood is never shed in my old home like in Maria’s two blocks down. Neighbor fluffs her curtains: Come back, she says. Come back, and when you do, I’ll bring you caldo the way I did when you were expecting la Chiquita, before you moved to the snow—where roosters are thin and don’t know how to dance.

Early Words for my Son

You will probably make sense of it all some Wednesday
afternoon as you sit with your wife and daughters,
unbuckling leather footlockers, poems,
your mother’s curvy schedule, knowing then
why I never taught you anything but how to read
and how to shade by crosshatching at the lip,
under the cheekbone, on the portraits
you made of me. You will probably thank me,
post-puberty, for never sitting down,
sparing you “the talk.” You will learn the way I claimed to
some girl named Suzie who will also teach you to smoke.
It took a long time before your father understood,
and who knows what the hell I’ll tell your sisters.
But you should know that when we were lonely,
and you nine, wanting me to hold you,
I just couldn’t do it with my arms. You were born male
like I was born female, and all I’ve ever known
is how to carry you in my teeth.

So She Would Not Watch Him Split in Two, A Mother Commits Her Child to the Care of Her Enemies

Not this − no reliquary and its depictions,

its barren womb, its flaking face, no. No

more, no less holy than a bit of bone or

cloth of the forgotten dead. No man as

king or woman as weigh scale. No infant

child’s body to split between mothers or

nations. No baby on a blue box, in a box, in

a cage. No relinquishing of a mother’s

mothering to the curators of law. Make no

reliquary of the cold night, a campaign, or

of desolation. Make no reliquary of the

river, the system, the otherland, or dream.

Make no reliquary of amendments, sword

will take the shape of what holds them −

we are not in things.

(from The Map of Every Lilac Leaf: Poets Respond to the Smith College Museum of Art, 2020)