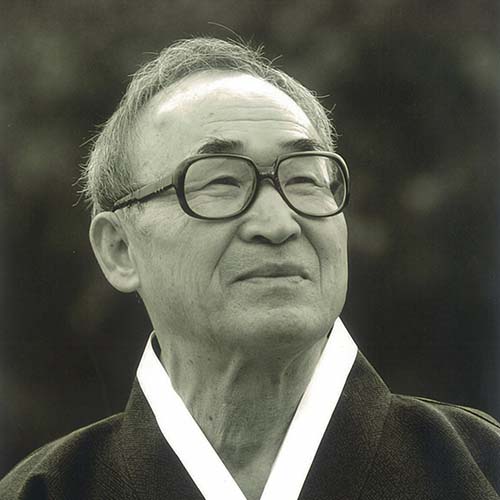 Described as “a force of nature” and frequently mentioned as a favorite for the Nobel Prize in Literature, Ko Un is a beloved cultural figure who has helped to shape contemporary literature. The preeminent and most prolific Korean living writer, he has published more than one hundred thirty-five volumes of poetry, fiction, essays, translations, and drama, and has twice won the prestigious Korean Literature Prize. Allen Ginsberg called him “a magnificent poet, a combination of Buddhist cognoscente, passionate political libertarian, and naturalist historian.”

Ko Un’s remarkable life is reflected in the many lives his literary output embodies. Born into a peasant family in 1933, Ko Un began writing poems from an early age. Traumatized by the horrors of the Korean War, he entered a monastery and became a monk. “If I hadn’t met Buddhism,” he has said, “I wouldn’t be here today, since I was lost at one time.” After leaving the Buddhist community in 1962, another “lost” decade of despair followed, including problems with alcohol and multiple suicide attempts, though his poetic output continued through these years of tribulation. After a profound political awakening in 1972, he joined in vigorous opposition to the military regime and in the struggle for human rights. He was detained, tortured, and imprisoned repeatedly and for long periods, during which Buddhist meditation sustained him. Finally set free in 1980, Ko Un married, moved to the countryside, fathered a daughter, and entered a period of stability and happiness, though he was still considered a dissident, and it would be more than another decade before he would be granted a passport.

Finally allowed to travel, Ko Un visited India, Tibet, the United States, and, at last, made his first trip to North Korea. In 2000, he accompanied President Kim Dae-Jung to the historic reunification summit in Pyongyang, reading his poetry before the leaders of the two Koreas. Later that year, he was an invited speaker at the United Nations Millennium Peace Summit in New York. Once his work was translated (into seventeen languages!) Ko Un quickly gained an international reputation and gave readings widely, including in Poland, Greece, Colombia, Sweden, Italy, and China.

Ko Un’s books in English include The Sound of My Waves (1993), Beyond Self: 108 Korean Zen Poems (1997), Traveler Maps (2004), Ten Thousand Lives (2005), Abiding Places: Korea South & North (2006), The Three Way Tavern (2006), and Songs for Tomorrow (2008), from publishers as diverse as the East Asia Program at Cornell University, Parallax Press, Tamal Vista Publications, Green Integer, Tupelo Press, and the University of California Press, respectively. Ko Un has presented his poems at the Geraldine Dodge Poetry Festival, in Stanhope, New Jersey, and, in 1999, he was visiting professor at the Korea Institute at Harvard University. In 2008, he was honored with the Lifetime Recognition Award from Canada’s Griffin Trust for Excellence in Poetry. Presenting Ko Un with this distinguished honor, the poet Robert Hass praised him as “a remarkable poet and one of the heroes of human freedom in this half century.”

For thirty-three years as a poet
I merrily defined what beauty was.
Each time, without hesitation
I would declare: beauty is like this, or:
this is a betrayal of beauty.
I went crazy over several different kinds
of aesthetic theory.
But beauty was never
in those aesthetic theories.
I was falling asleep
with the light on.
What fear in the days gone by!
From now on I will strictly refrain
from any definitions of beauty!
Define away!
Define away!
As if beauty can ever be defined!
All through the weeks of summer rain
no flowers bloomed on the pumpkin creepers.
Now the rains are over
and at long long last a flower has bloomed,
inside it a bee is quivering,
outside it I am quivering.
Pumpkin flower brimming full of life:
you are true beauty!

THE SOUND OF MY WAVES (Cornell East Asia Series, 1996)

I’m utterly helpless.
I’ll just have to swallow my spit
and adversity, too.
But look!
A distinguished visitor deigns to visit
my tiny, north-facing cell.
Not the chief making his rounds, no.
As evening falls, a ray of sunlight.
A gleam no bigger than a crumpled postage stamp.
I’m crazy about it! Real first love!
I try to get it to settle on the palm of my hand,
to warm the toes of my shyly bared foot.
Then as I kneel and offer it my undevout, lean face,
in a moment that scrap of sunlight slips away.
After the guest has departed through the bars
the room feels several times colder and darker.
This special cell of a military prison
is like a photographer’s darkroom.
Without any sunlight I laughed like a fool.
One day it was a coffin holding a corpse.
One day it was altogether the sea. How wonderful!
A few people survive here.
Being alive is a sea
without a single sail in sight.

The News of Flowers

Spring. Everything’s liberated.
The news of flowers
eases the poverty of this world.
Throughout this fractured country
(some say it’s a pity,
others not so)
spring has come full force.
An azalea blooming at Cheju Island
in the very south,
after a few days
begins blossoming
across the sea
in Southern Cheolla
& Southern Kyeongsang.
A few days later
& it reaches the shore of the Han, mid-country,
& all along the Soyang River.
About a month later
around Hyesan
on the upper reaches of the Yalu, North Korea: blossoms.
At the end of May
about 2700 meters up
by a cold spring at the treeline
azaleas bloom in many colors.
This is enough.
One cannot wish for more.
Where could things be better than among the flowers of a spring day?
So with South & North: gradually, evenly.