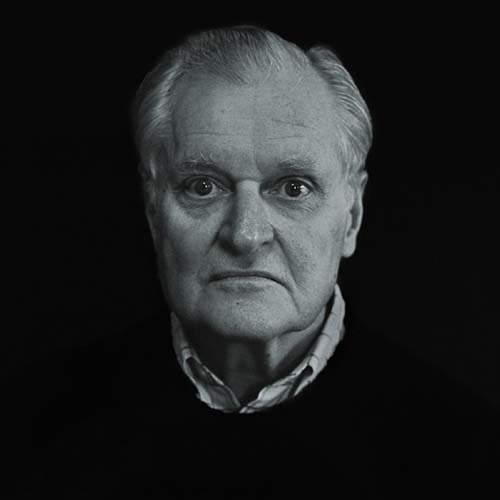 John Ashbery has received nearly every major writing award the literary world has to offer, and his work has been translated into more than twenty-five languages. Author of twenty poetry collections, as well as plays, fiction, translations, and art criticism, he has long defied any singular artistic identity, “juggling the infinite possibilities of genre,” as critic Helen Vendler put it.

Ashbery first met critical acclaim with his 1956 collection Some Trees, which was selected by W. H. Auden for the Yale Younger Poets Series. Perhaps his most famous work is 1975’s Self-Portrait in a Convex Mirror, which the New York Times noted for its “breathtaking freshness and adventure in which dazzling orchestrations of language open up whole areas of consciousness no other American poet has even begun to explore.” The book received the Pulitzer Prize, the National Book Critics Circle Award, and the National Book Award. His most recent volume, Planisphere, was praised by Boston Phoenix as “repetitive…in the way that a beach is repetitive with sand, or the night sky is repetitive with stars.”

Ashbery describes himself as “a harebrained, homegrown surrealist whose poetry defies even the rules and logic of Surrealism.” With Kenneth Koch and Frank O’Hara, among others, Ashbery was part of the New York School of poets, an informal group active in the 1950s and 60s, whose work is heavily influenced by surrealism, modernism, and abstract expressionism. Rather than writing poems representative of experiences, the group aimed to write poems that are experiences in and of themselves.

A native of Rochester, New York, Ashbery spent his high school years at Deerfield Academy, later attending Harvard, where he befriended Koch and O’Hara, and went on to earn a Masters degree in French Literature from Columbia University. A two-time Fulbright scholar, he lived in Paris for a decade, where he wrote art criticism, returning to New York and continuing to work for ArtNews, where he served as executive editor until the magazine was sold in 1972. His teaching began with a long stint as Co-Director of the MFA program in creative writing at Brooklyn College and includes a year at Harvard as the Charles Eliot Norton Professor of Poetry and nearly two decades as the Charles P. Stevenson, Jr. Professor of Languages and Literature at Bard College.

As You Came From The Holy Land

From SELF-PORTRAIT IN A CONVEX MIRROR (Penguin Books, 1975)

And Ut Pictura Poesis is her Name

You can’t say it that way any more.
Bothered about beauty you have to
Come out into the open, into a clearing.
And rest. Certainly whatever funny happens to you
Is OK. To demand more than this would be strange
Of you, you who have so many lovers,
People who look up to you and are willing
To do things for you, but you think
It’s not right, that if they really knew you . . .
So much for self-analysis. Now,
About what to put in your poem-painting:
Flowers are always nice, particularly delphinium.
Names of boys you once knew and their sleds,
Skyrockets are good—do they still exist?
There are a lot of other things of the same quality
As those I’ve mentioned. Now one must
Find a few important words, and a lot of low-keyed,
Dull-sounding ones. She approached me
About buying her desk. Suddenly the street was
Bananas and the clangor of Japanese instruments.
Humdrum testaments were scattered around. His head
Locked into mine. We were a seesaw. Something
Ought to be written about how this affects
You when you write poetry:
The extreme austerity of an almost empty mind
Colliding with the lush, Rousseau-like foliage of its desire to communicate
Something between breaths, if only for the sake
Of others and their desire to understand you and desert you
For other centers of communication, so that understanding
May begin, and in doing so be undone.

It’s this crazy weather we’ve been having:
Falling forward one minute, lying down the next
Among the loose grasses and soft, white, nameless flowers.
People have been making a garment out of it,
Stitching the white of lilacs together with lightning
At some anonymous crossroads. the sky calls
To the deaf earth. The proverbial disarray
Of morning corrects itself as you stand up.
You are wearing a text. The lines
Droop to your shoelaces and I shall never want or need
Any other literature than this poetry of mud
And ambitious reminiscences of times when it came easily
Through the then woods and ploughed fields and had
A simple unconscious dignity we can never hope to
Approximate now except in narrow ravines nobody
Will inspect where some late sample of the rare,
Uninteresting specimen might still be putting out shoots, for all we know.

Available as a Broadside.