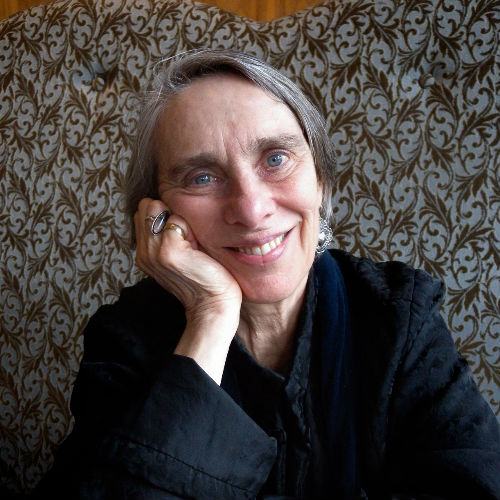 Joan Larkin’s work shines with unrelenting curiosity and ruthless clarity. She takes on a range of difficult subjects, including sexuality, loss, illness, abortion, alcoholism, and child abuse, combining intensity of material and mastery of craft with incredible grace. In the words of Marie Ponsot, “Joan Larkin’s high-wire poetic acts unite both electric tension and steadfast balance. Deft, probing language surges in these poems, to the music of free verse, metric invention, high rhetoric and demotic wit.” One part grit, two parts heart, her language seeks truth and presses beyond surfaces, uncovering what is most intimate. As a Los Angeles Times review reflected, “For Larkin, poetry is a form of witness; she offers no false hopes, no resolutions, except to reflect…honestly and directly…the complicated, at times uncontrollable, messiness of being alive.”

A native of Massachusetts who has lived in New York City for many years, Larkin is the author of five books of poems, most recently in My Body: New & Selected Poems, and the chapbook Legs Tipped with Small Claws. Among her many honors are two Lambda Literary Awards, the Audre Lorde Award for Lesbian Poetry, fellowships in poetry and playwriting from the Massachusetts Cultural Council, the New York Foundation for the Arts, and the National Endowment for the Arts, and the 2011 Academy of American Poets Fellowship.

In addition to poetry, Larkin is a playwright, prose writer, and translator. Her work in other genres includes The AIDS Passion and Brother Dust, a hip-hop version of Sophocles’ Antigone, Glad Day: Daily Meditations for Gay, Lesbian, Bisexual, and Transgender People, and Sor Juana’s Love Poems, which she translated with Jaime Manrique. Larkin also co-founded the independent press Out & Out Books as part of the feminist literary explosion of the 1970s and co-edited the groundbreaking poetry anthologies Amazon Poetry, Lesbian Poetry, Gay and Lesbian Poetry in Our Time, as well as A Woman Like That: Lesbian and Bisexual Writers Tell their Coming Out Stories.

She has been on the writing faculties at Brooklyn College, Sarah Lawrence College, Goddard College, and Columbia College at Chicago. She currently teaches at the Drew University MFA Program in Poetry and Poetry in Translation, and spent a year as the Grace Hazard Conkling Poet in Residence at Smith.

She wants a house full of cups and the ghosts
of last century’s lesbians; I want a spotless
apartment, a fast computer. She wants a woodstove,
three cords of ash, an axe; I want
a clean gas flame. She wants a row of jars:
oats, coriander, thick green oil;
I want nothing to store. She wants pomianders,
linens, baby quilts, scrapbooks. She wants Wellesley
reunions. I want gleaming floorboards, the river’s
reflection. She wants shrimp and sweat and salt;
she wants chocolate. I want a raku bowl,
steam rising from rice. She wants goats,
chickens, children. Feeding and weeping. I want
wind from the river freshening cleared rooms.
She wants birthdays, theaters, flags, peonies.
I want words like lasers. She wants a mother’s
tenderness. Touch ancient as the river.
I want a woman’s wit swift as a fox.
She’s in her city, meeting
her deadline; I’m in my mill village out late
with the dog, listening to the pinging wind bells thinking
of the twelve years of wanting, apart and together.
We’ve kissed all weekend; we want
to drive the hundred miles and try it again.

One who lifted his arms with joy, first time across the finish line
at the New York marathon, six months later a skeleton
falling from threshold to threshold, shit streaming from
his diaper,
one who walked with a stick, wore a well-cut suit to the opera,
to poetry readings, to mass, who wrote the best long poem
of his life at Roosevelt Hospital and read it on television,
one who went to 35 funerals in 12 months,
one who said I’m sick of all you AIDS widows,
one who lost both her sisters,
one who said I’m not sure that what he and I do is safe, but we’re
young, I don’t think we’ll get sick,
one who dying said They came for me in their boat, they want me
on it, and I told them Not tonight, I’m staying here with James,
one who went to Mexico for Laetrile,
one who went to California for Compound Q,
one who went to Germany for extract of Venus’ flytrap,
one who went to France for humane treatment,
one who chanted, holding hands in a circle,
one who ate vegetables, who looked in a mirror and said
I forgive you,
one who refused to see his mother,
one who refused to speak to his brother,
one who refused to let a priest enter his room,
one who did the best paintings of his life and went home from
his opening in a taxi with twenty kinds of flowers,
one who moved to San Francisco and lived two more years,
one who married his lover and died next day,
one who said I’m entirely filled with anger,
one who said I don’t have AIDS, I have something else,
one with night sweats, nausea, fever, who worked as a nurse,
one who kept on studying to be a priest,
one who kept on photographing famous women,
one who kept on writing vicious reviews,
one who kept going to AA meetings till he couldn’t walk,
one whose son came just once to the hospital,
one whose mother said This is God’s judgment,
one whose father held him when he was frightened,
one whose minister said Beth and her lover of twelve years were
devoted as Ruth and Naomi,
one whose clothes were thrown in the street, beautiful and
ties a neighbor picked from the garbage and handed out at
a party,
one who said This room is a fucking prison,
one who said They’re so nice to me here,
one who cut my hair and said My legs bother me,
one who couldn’t stand, who said I like those earrings,
one with a tube in his chest, who asked What are you eating?
one who said How’s your writing? Are you moving to the
mountains? who said I hope you get rich.
One who said Death is Transition,
one who was doing new work, entirely filled with anger,
one who wanted to live till his birthday, and did.

The day I went to work,
I stopped nursing you, I pushed
the thick rubber nipple between your lips.
Something in your eyes’ dark lakes
disappeared-did I really see this?
Daily you were drenching ten pounds
of diapers, bedclothes.    you weighed
nothing.    Puffball.
I held you in the crook of one arm.
Your small breath warmed me.
Work at the computer billing company
began at nine.   The sitter
could give you bottles.   When I was done
paying her, there was no money
for one week’s food-
I knew this was true,
even when Jim said, That job
costs you more than you take home.

Tonight,
end of August, you are eighteen.
I’m fine, you repeat on the phone.
there’s a cool edge to the air,
the season turning.   It’s dusk.
From my open car window, I see
the fawn, head lifted, half
over the fence.   For a moment,
she moors me in her dark gaze-
then floats back, soundless,
somewhere I can’t see.
Nothing I know can hold her in the field.

From A LONG SOUND (Granite Press)