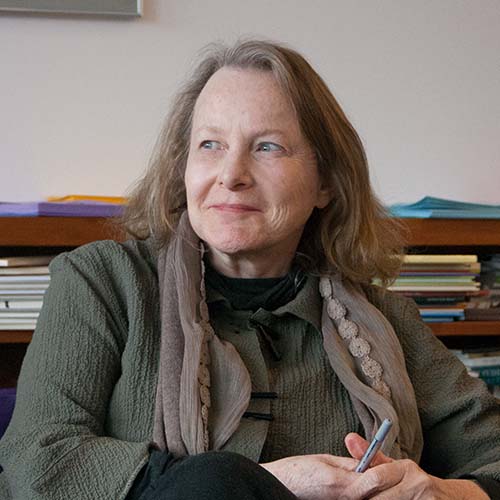 Joan Houilihan is the author of four collections of poems, all of them visceral, musical, startling and tender—in both material and style—and each reaching deep into new territory. Her first book, Hand-Held Executions, published in 2003, was re-released in 2009 in an expanded version to include her provocative Boston Comment essays, and followed by The Mending Worm, winner of the Green Rose Award from New Issues Press in 2006.

Houlihan describes the space poets occupy as the revitalization of language and experience. Her own body of work manages at once to be deeply human and to push and boundaries of expression. A lowly pronoun gave rise to her third collection, The Us, a poetic sequence spoken in the collective voice of nomadic hunter-gatherers at the threshhold of language. It was was named a 2009 must-read by the MA Center for the Book. “The Us is like nothing I have ever read or seen,” writes Lucie Brock-Broido. “These poems are just extraordinary: wildly hewn, classically construed and skewed by an imagined lexicon.” The book ends with its protagonist, Ay, recovering from a life-threatening wound. Tonight we celebrate the release of Ay, a sequel, “wherein Ay recovers his speech & mobility & is treated as a god.” When asked for a one-sentence book description, Houlihan put it this way: Trauma begets separation; separation begets self-knowledge; self-knowledge begets empathy; empathy begets mercy. Ilya Kaminsky praised the book’s “magnificent force,” calling it “epic in scope, lyric in texture.” In Fred Marchant’s words, “Joan’s US and this character Ay. . .”help us see and feel and know the landscape of loss within our own psyches, deep down, in the “primitive peoples” part of each of our beings.”

Born and raised in Massachusetts, Houlihan’s early interest in poetry was inspired by T.S. Eliot, Gerard Manley Hopkins, and her experience with parochial school. Growing up in an Irish Catholic household, her first exposure to the “sonic textures” of poetry came in the form of religious psalms and parables. After completing her Bachelor’s and Master’s Degrees at the University of Massachusetts at Amherst, she worked as a technical writer, reporter, and editor, and went on to become a driving force in the poetry community. In addition to publishing in a wide array of journals, including Poetry, Boston Review, Harvard Review and Gulf Coast, she has served as a brilliant and courageous critic and editor at a series of online magazines, most recently as contributing critic for Contemporary Poetry Review and associate editor of Tupelo Quarterly. In 2004, she founded the Concord Poetry Center, a community center that offers readings, workshops, and seminars. She is also the founder and director of the Colrain Poetry Manuscript Conference, a one-of-a-kind model that provides poets with feedback from mentor poets and editors to help set their manuscripts on the path to publication. She has taught at Columbia University and Emerson College, and currently serves on the faculty of Lesley University’s Low-Residency MFA program in Cambridge, Massachusetts.

Froze by winter blast
us could not grip on meat or crust,
ours fingers blackened down to all the hand.

And many fell that time
and so were fewer count of us
coming into weather, loosened snow,
water falling down around the stones.

Us heard command in that.

Rose again, the light, and rooted things crept out,
greenly took up spots between the snow.
What good there were for us
showed in starrys round the moon,

By roar and rush and smell of brine
us found the sea and stood along.

Sen’s scatter-sticks and wobble-stones
gave command to go by boat
and find by water, home.

"THEN AY KNOW my horse"

THEN AY KNOW my horse,
let alive and out of days,
hide now paled, hind legs slow
to drag, lower head to lift,
hoof-split, burred and rough from the dirt.

Strange when Ay speak to him.
Tremble runs under him.
What owned him fills him.

Same horse Ay tamed are you the same?
Mane-tangled, lank, and under brow,
hims eye as from a coal half-burnt
sparked up. Ay pulled my body on-

start, rear, run-
and did not loose but stormed and shaken
held as leaf to stem. Sky could hear
the finding cry Ay made.

COLD HEIGHT, SEED-soaked,
what lives toward shows the marks:
auk and owl, insect, horn,
leaf-borne or buried in dirt.
All the sun-soft sheep.
Things the night takes away.

Over the grove, freed of hive,
a bee lifts from its summer bed
to a slit of light one deep
telling its own stung way.
Small, and it lives toward the swarm,
rare from the cluster and blind.

Age, a parcel of rag, ay drag
under open sky.
As if ay lived that long
in cold and cave and chalk,
buried in light holes or soaked with night.
As if in the heat of birds.

Hand, one hand, and Ay tap my chest-
Here, where father built-
then pasture hims shadow, tend him,
coming from sleep as all things do
alive toward the first fires of day.