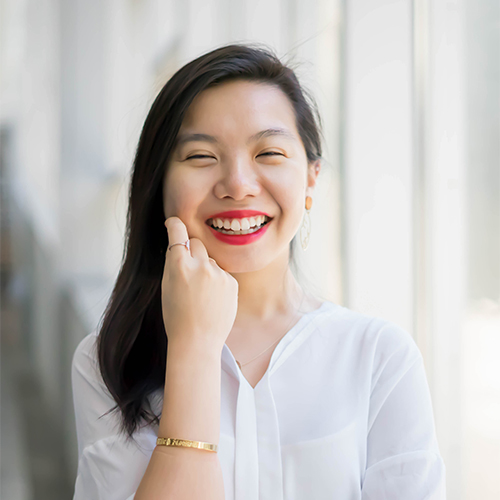 Jessica Nguyen/Nguyễn Thị Mai Nhi is a world traveler, activist and writer. Though having lived in the U.S. for most of her life, she hops from one country to the next in hopes of discovering pieces of home to fill her Vietnamese-American soul. Her prose and poetry appear in AASIA Journal, diaCRITICS, Womanly Magazine and Sinister Wisdom. Her first book of poems is “softly, I speak,” (Louisiana Literature Press, 2020), which was selected as part of Louisiana Literature Press’s chapbook series. To learn more about her current projects, go to byjessicanguyen.com and follow her @byjessicanguyen on social media.

sticks and stones, please: from a millennial

stick and stones
may break my bones
but you can count on...

...my parents’ displays of disappointment and disapproval,
fear of failure,
10 theses and 100 cover letters,
robot rejections from ivy league schools and fortune 500 companies,
college debt that would require 20 years for it to be forgiven
(terms and conditions: if all regular payments were made on time for the past 20 years),
ghost>ing breakups from straight and queer men and womxn,
>monthly doses of heartbreaks and hookups from tinder,
class field trips to “the isms” and phobias:
capitalism, classism, ableism, racism, sexism, homophobia, transphobia,
- institutionalized and not,
allowing my sense of self-worth to be based on
social media gurus: facebook, instagram, twitter, and snapchat
“pics or it didn’t happen,” not having enough likes, not having enough followers,
having over 1k friends and followers
and yet not finding one you can trust enough
to hold your hair while you vomit in the toilet,
first world millennial problems,
third world problems:
news of world hunger, poverty, and human trafficking,
global warming, and climate crisis-
“they’re all fake news! say no to affirmative action and yes to deportation,” says
the oompa loompa as our president
who also said that none of those issues above matter as much as
our guns and walls and drug wars
the lack of resources and people power to tackle issues that matter,
mental health issues, like depression, anxiety, attention deficit disorder,
the pressure to be [fill in the blank here] enough
the pressure to not not be [fill in the blank here] enough