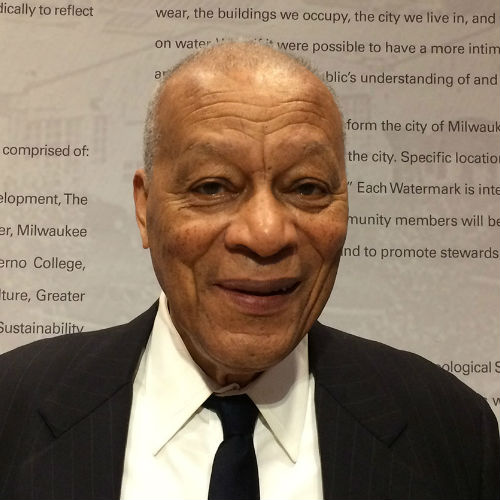 In 1996 the Chancellors of the Academy of American Poets awarded Wright the Academy’s 62nd Fellowship for distinguished poetic achievement. “Over the past quarter-century,” reads J.D. McClatchy’s citation, ” Jay Wright’s books have appeared like summer lightning: sudden, unexpected, brilliant in the surrounding dark.” His poems, which reflect the landscapes and cultures of Africa, Latin America, and the American west, are “miracles of visionary energy, moralized lyricism, and a buoyant, complex mythmaking.”

Wright’s other honors include a Rockefeller Fellowship; an Ingram Merrill Foundation Award; a Guggenheim Fellowship; an American Academy of Arts and Letters Literary Award; and a MacArthur Fellowship. He was born in Albuquerque, New Mexico, educated at the University of California at Berkeley and Rutgers University, and resides in Vermont.

Nomadic hearts know there is no rose
waiting at every door, that often a threshold’s
atmosphere can be worth your life.
Even so, memory must have led us here.

After Perote, the old bus gathers its wings
and swings us through the happy
undulations of fog- and cloud-bound hills,
toward Xalapa, with the cross in its name.
I expect a familiar sand, pillowed against
walls gone red and grainy with heat,
and a muezzin’s bell
knitting the loose cloth of evening.
But the heart is a fraudulent voice, a wily ear,
and memory can be too staunchly evangelic.
So the bell goes, in the whisper of matins and vespers,
and the constant idiot’s rain dresses the walls
in filmy gray.

I should be grateful that memory has left
an anteroom, where I can stock
the cobbled street that leads me to tortillas
and the nuns’ diabolic chiles,
or watch the blue-serged licenciado
parade his cane along the Avenida Zamora.
Perhaps I should reserve another room
for the Pérgola’s alambres,
and the surpliced children
(hand in hand through the park to school)
and the violet insistence of late afternoon
with coffee and pan on the terrace.
Looking forward, I see the moment
I will choose to leave this garden,
when, on a cloistered morning in April,
I stand in the post office’s tiled vestibule
and unlock the rage that you
will understand
and a nomadic heart will carry away.

All through a bitter April,
spring has refused our invitation.
Still, the inner seasons turn,
and, when the ice breaks
and the blue water furs white
over the rocks in small streams,
the silence that had blanketed itself
in the crippled apple tree
walks away.

I hear that silence in the water
when I stand on the pond’s edge,
and watch my father brace himself
in the stocks of his fish house
out on the ice, a silence
that seems a loon weariness,
a burden of lost bear,
lately moaning coyotes cutting
through the sheep’s straw fur,
for the kill.

Over the ridge now, I see morning
rise in white smoke over white houses,
and know the cows have awakened
to their milky certainties.
I awaken to the depth charge of my own
stove’s fire, having dreamed all night
of the smoky weeds lying deep in the pond
and the past certainties of mid-May,
when a blaze of dandelions lit my path
to the water.

Spring’s reasons come hard through the trunk of winter.
A father like mine can spend too long in a mind’s ditch,
filled with paper potatoes, curdled cabbage, squash
and zucchini blooming in floods;
can huddle too long
with death’s gazette, chimney fires, a son’s leaving,
a barn gone down under heavy snow.
I would awaken the water’s flow in winter,
and have him uncoil in his boat,
with the peppery summer wind tugging at his laziness.
That would be more than the sap of April’s promise,
less than April’s refusal.

Mid-May.
I grow impatient with the lazy sting of blackflies,
with the patient way my neighbors snuffle
in their gardens and gauze them for the cold nights,
with the loggers’ bourbon legends, and with the clouds
down from Canada spread-eagled over treetops.
“Something the heart here misses.”
But wise old Indian Pond erupts on the left hand of spring.
In the sand at its feet,
someone, borrowing the incense and fire of another life,
has cut a crescent moon, to mark the place
where tethered April broke
and disappeared.

It would be easier
to bury our dead
at the corner lot.
No need to wake
before sunrise,
take three buses,
walk two blocks,
search at the rear
of the cemetery,
to come upon the familiar names
with wilted flowers and patience.
But now I am here again.
After so many years
of coming here,
passing the sealed mausoleums,
the pretentious brooks and springs,
the white, sturdy limestone crosses,
the pattern of the place is clear to me.
I am going back to the Black limbo,
an unwritten history
of our own tensions.
The dead lie here
in a hierarchy of small defeats.
I can almost see the leaders smile,
ashamed now of standing
at the head of those
who lie tangled
at the edge of the cemetery
still ready to curse and rage
as I do.
Here, I stop by the imitative cross
of one who stocked his parlor
with pictures of Robeson,
and would boom down the days,
dreaming of Othello’s robes.
I say he never bothered me,
and forgive his frightened singing.
Here, I stop by the simple mound
of a woman who taught me
spelling on the sly,
parsing my tongue
to make me fit for her own dreams.
I could go on all day,
unhappily recognizing small heroes,
discontent with finding them here,
reproaches to my own failings.
Uneasy, I search the names
and simple mounds I call my own,
abruptly drop my wilted flowers,
and turn for home.