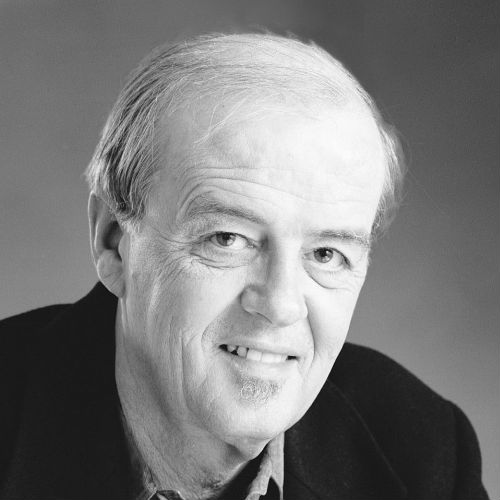 James Tate was a 23-year-old graduate student when he won the Yale Series of Younger Poet’s award for The Lost Pilot. A dozen subsequent collections have established him as one of the foremost American surrealist poets and winner of every major honor, from the $100,000 Tanning Prize to the National Book Award and the Pulitzer Prize.

Prolific and wildly inventive, Tate has been hailed by the Village Voice as “the best American poet born in the 1940s,” by the New York Times as “an elegant, anarchic clown,” and by poet and critic Dana Gioia as “the perpetual enfant terrible of American poetry.” Father of ‘conversational’ or ‘homespun’ surrealism, famous for making the genre accessible and popular in the U. S. for the first time in the ’60s and ’70s, he has also been translated into over a dozen languages. Tate’s poems are irreverent, hallucinatory, utterly unafraid – he says he’s “willing to follow a poem anywhere so long as it promises some insight or revelation” – often deadly serious and riotously funny simultaneously.

Tate’s latest works include Memoir of the Hawk: Poems and Dreams of a Robot Dancing Bee, a collection of short stories. As poet John Ashbery writes, he “never ceases to astonish, dismay, delight, confuse, tickle, and generally improve the quality of our lives.” Tate was born in Kansas City, Missouri, and made his home in Amherst, where he was a member of the faculty of the University of Massachusetts from 1971 until his death in 2015.

What good is life without music.
But that’s impossible,
one shuffle has always lead to another.
One man hears it start on his lathe,
a mother beats her eggs.
There’s a typewriter in the next room.
Two cars are angry at each other.
The baby downstairs is wet again.
I remember the voice of a dead friend.
Everything speaks at the same time.
Music will watch us drown.

I write letters to all those from whom I receive
and to many of those from whom I don’t.
I read books, anything, useless piles of random
insufferable rubbish for which, in my torpid panic,
I fall through time and space each day
in my foolish way, remembering only the present feeling,
not the village with its face of death,
nothing to be carried secretly in a car.
I move from the stiff-backed chair
to the brown leather one
as the day wears on. And then finally
the couch, allowing the spirit to leave
the broken body and wander at will.
Lately it’s a pasture of Holsteins she longs for.

There’s a certain point in each evening when I have to put on some really soul-shattering rock-and-roll music and comb my hair into this special caveman fright-wig. I’ve done as much as two or even three dollars worth of damage to my apartment in one hour of all-stops-pulled Bacchic, Dionysian celebration and revolution of this great dull life, so fascinating it hypnotizes you and then puts you to sleep, only to never know the ending. It’s strange though, no one ever complains. Is it what I feared all along? We are playing the same song and no one has ever heard anything.

People read poems like newspapers, look at paintings as though they were excavations in the City Center, listen to music as if it were rush hour condensed. They don’t even know who’s invaded whom, what’s going to be built there (when, if ever). They get home. That’s all that matters to them. They get home. They get home alive.

Do you have adequate oxen for the job?
No, my oxen are inadequate.
Well, how many oxen would it take to do an adequate job?
I would need ten more oxen to do the job adequately.
I’ll see if I can get them for you.
I’d be obliged if you could do that for me.
Certainly. And do you have sufficient fishcakes for the men?
We have fifty fishcakes, which is less than sufficient.
I’ll have them delivered on the morrow.
Do you need maps of the mountains and the underworld?
We have maps of the mountains but we lack maps of the underworld.
Of course you lack maps of the underworld,
there are no maps of the underworld
And, besides, you don’t want to go there, it’s stuffy.
I had no intention of going there, or anywhere for that matter.
It’s just that you asked me if I needed maps. . . .
Yes, yes, it’s my fault, I got carried away.
What do you need, then, you tell me?
We need seeds, we need plows, we need scythes, chickens
pigs, cows, buckets and women.
Women?
We have no women.
You’ve a sorry lot, then.
We are a sorry lot, sir.
Well, I can’t get you women.
I assumed as much, sir.
What are you going to do without women, then?
We will suffer, sir. And then we will die out one by one.
Can any of you sing?
Yes, sir, we have many fine singers among us.
Order them to begin singing immediately.
Either women will find you this way or you will die
comforted. Meanwhile busy yourselves
with the meaningful tasks you have set for yourselves.
Sir, we will not rest until the babes arrive.

A little bookstore used to call to me.
Eagerly I would go to it
hungry for the news
and the sure friendship.
It never failed to provide me
with whatever I needed.
Bookstore with a donkey in its heart,
bookstore full of clouds and
sometimes lightning, showers.
Books just in from Australia,
books by madmen and giants.
Toucans would alight on my stovepipe hat
and solve mysteries with a few chosen words.
Picasso would appear in a kimono
requesting a discount, and then
laugh at his own joke.
Little bookstore with its belly
full of wisdom and confetti,
with eyebrows of wildflowers-
and customers from Denmark and Japan,
New York and California, psychics
and lawyers, clergymen and hitchhikers,
the wan, the strong, the crazy,
all needing books, needing directions,
needing a friend, or a place to sit down.
But then one day the shelves began to empty
and a hush fell over the store.
No new books arrived.
When the dying was done,
only a fragile, tattered thing remained,
and I haven’t the heart to name it.