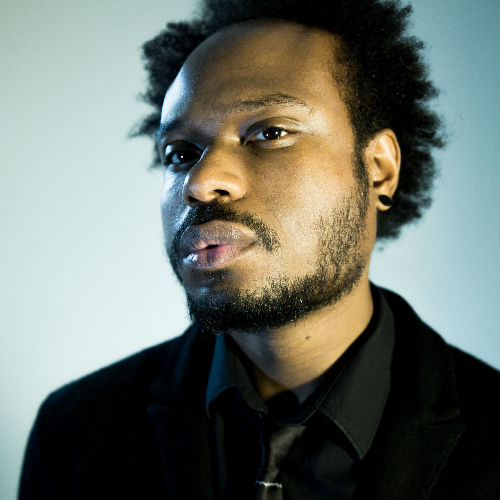 Jamaal May, described by the Boston Review as a “poet as machinist”, writes exquisite paths between the melancholy and the sublime. Born and raised in Detroit, Michigan, May explores themes of community, dichotomy, and obsolescence. He is the winner of awards ranging from Poetry magazine’s annual Wood prize to the Spirit of Detroit award, given to Detroit citizens for outstanding achievement and service. He has also been a fellow of Cave Canem, The Kenyon Review, and the Civitella Ranieri Foundation in Italy.

A smash success, May’s debut collection Hum (Alice James Books, 2013) catalogues the anxiety and magic of machines. According to reviewer Marty Cain, the poems of Hum are “a spiritual force, presenting a potential for energy, for both violence and renewal”. Each line is carefully constructed and wired among the others, his vision like an engine that supplies dizzying power and movement. May’s home city, Detroit, is the setting and centerpiece of his mechanical whirr and buzz. He possesses a striking ability to peel back layers of the city, breaking down and reconstructing its image as one builds a machine. Poet Natasha Trethewey praises this quality of his work, remarking that “Hum is concerned with what’s beneath the surfaces of things—the unseen that eats away at us or does the work of sustaining us.” Hum was the winner of the 2012 Beatrice Hawley award and a 2014 Notable Book Award from the American Library Association, as well as earning a spot on The Boston Globe’s list of best books in 2013.

May’s second collection, The Big Book of Exit Strategies (2016), was also published by Alice James. In a Publishers Weekly review, each line is said to “turn the next, like a skeleton key opening an endless hallway of doors”. May often revisits the stark beauty and pain of Detroit in poems such as “There are Birds Here”, while other poems like “FBI Questioning During The 2009 Inauguration” explore moral and political challenges. In an interview with The Normal School, May points out that those who ask how poetry will change the world “seem to start with the implicit assumption that it could.” He says he believes it already does, “but not in the singular immediate way that seems to be demanded by some to justify the creation of literature. It is one of many human endeavors that, taken together, help to repair our minds into more thoughtful devices.”

Jamaal May is currently a contributing editor of The Kenyon Review, co-founder, along with Tarfia Faizullah, of the Organic Weapon Arts chapbook press and video series, and serves as Distinguished Writer at the University of Michigan, Ann Arbor.

There are Birds Here

There are birds here,
so many birds here,
is what I was trying to say
when they said those birds were metaphors
for what is trapped
between fences
and buildings. No.

The birds are here
to root around for bread
the girl’s hands tear
and toss like confetti. No,

I don’t mean the bread is torn like cotton,
I said confetti, and no
not the confetti
a tank can make out of a building.
I mean the confetti
a boy can’t stop smiling about,
and no his smile isn’t much
like a skeleton at all. And no
their neighborhood is not like
a war zone.

how lovely the ruins,
how ruined the lovely
children must be
in your birdless city.

From THE BIG BOOK OF EXIT STRATEGIES (Alice James Books, 2016)

The heart trembles like a herd of horses. –– Jontae McCrory, age 11

Hold a pomegranate in your palm,
imagine ways to split it. Think of the breaking
skin as shrapnel. Remember granada
means pomegranate and granada
means grenade because grenade
takes its name from the fruit;
identify war by what it takes away
from fecund orchards. Jontae,
these are the arms they will fear from you.
there will always be at least one like you:
a child who gets the picked-over box
with mostly black crayons. One who wonders
what beautiful has to do with beauty as he darkens
a sun in the corner of every page,
constructs a house from ashen lines,
sketches stick figures lying face down––
I know how often red is the only color
left to reach for. I fear for you.
My heart trembles like a herd of horses.
You are writing a stampede into my chest.
This is the same thumping anxiety that shudders
me when I push past marines in high school
hallways, moments after their video footage
of young men dropping from helicopters
in night vision goggles. I want you to see
in the dark without covering your face,
carry verse as countermeasure to recruitment videos,
and remember the cranes buried inside poems
that hung in Tiananmen Square––
remember because Huang Xiang was exiled
for these, exiled for this, the calligraphy of revolt.
You will stand nameless in front of a tank against
those who would rather see you pull a pin
from a grenade than pull a pen
from your backpack. Jontae,
they are afraid.

In a waiting room at the Kresge Eye Center
my fingers trace the outline of folded money
and I know the two hundred fifty dollars there
is made us of two hundred forty-five I can’t afford to spend
but will spend on a calm voice that can explain
how I can be repaired, Instead, the words legally blind
and nothing can be done mean I’ll spend
the rest of the week closing an eye to the world,
watching how easily this becomes that.
The lampposts lining the walk home
are the thinnest spears I’ve ever seen, a row of trash cans
becomes discarded war drums, and teeth
in the mouth of an oncoming truck
want to tear through me. Some of me
always wants to be swallowed

The last thing my doctor said before I lost
my insurance was to see a vision specialist
about the way light struggles and bends
through my deformed cornea.
Before the exam I never closed my right eye
and watched the world become a melting watercolor
with the left. Before a doctor shot light
into the twitching thing, before I realized
how little light I could handle, I never
thought much of the boy who clawed up at me
from beneath my punches, how a fingernail scraped
the eye, or how it closed shut
like a door to a room I could never leave

I could see the reflective mesh of his shoes,
the liquor bottle tossed in an arc
even before it shattered at my feet, and I am embarrassed
at how sharp my eyes were, how deft my body,
my limbs closing the distance––how easily
I owned his face, its fear and fought back tears––
all of it mine. I don’t want to remember the eyes
that glance over shoulder just before
I dragged him like a gazelle into the grass
that was a stretch of gravel and glass
outside a liquor store. How easily this becomes that.

On a suspension bridge I close my bad eye
and it’s like aiming through a gunsight;
even the good eye is only as good as whatever glass
an optometrist can shape. I watch sundown
become a mouth. Broad and black-throated,
it devours the skyline and every reflection.
Horns sprout from the head of my silhouette
rippling dark, dark, dark against the haze of water
and I try to squint that monster
into the shape of a man.