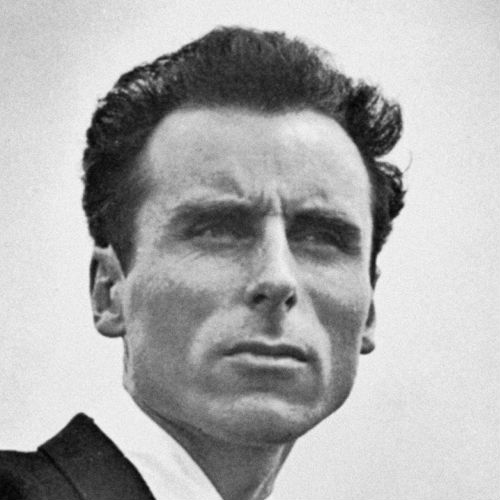 The work of Jack Gilbert is both a rebellious assertion of the call to clarity and a profound affirmation of the world in all its aspects. David St. John praised him for the “stoniest and most aesthetic Romanticism in American poetry.” Within the precise and tightly-controlled boundaries of the page, his stoic vision and solitary labor produce a poetry of integrity that is also deeply expressive, deeply human. Of his vision, The New York Times writes, “Life and death are not opposites in this conception of things; they partake of each other. Together, they are the spirit.”

Gilbert’s first volume of poems, Views Of Jeopardy, received the Yale Younger Poet’s Prize in 1962, and was nominated for the Pulitzer Prize, alongside collections by Robert Frost and William Carlos Williams. Muriel Rukeyser called this early work “abrupt, Etruscan, illuminated.” While there were long intervals between Gilbert’s succeeding books, each has remained true to the sparse, concrete, yet powerfully affecting style that has always characterized his work, and each has been greeted eagerly and garnered great acclaim. Monolithos: Poems, 1962 and 1982, won him a second Pulitzer nomination, as well as the Stanley Kunitz Prize and the American Poetry Review Prize. Of his third and perhaps most severe book, The Great Fires: Poems, 1982-1992, James Dickey wrote, “He takes himself away to a place more inward than is safe to go; from that awful silence and tightening, he returns to us poems of savage compassion.”

In his long-awaited and eagerly-anticipated new collection, Refusing Heaven, Gilbert writes about the commingled passion, loneliness, and sometimes surprising happiness of a life spent in luminous understand of his own blessings and shortcomings. With masterful reserve and deep patience, he infuses the everyday, in its struggles and delights, with a clarity of vision that casts shadows on lightness and brings illumination to the dimly unconsidered.

Gilbert has been awarded a Lannan Literary Award for Poetry and grants from the National Endowment for the Arts and the Guggenheim Foundation. Gilbert served in 1999-2000 as the Grace Hazard Conkling Writer-in-Residence at Smith College. He lived for extended periods in New York, San Francisco, Northampton, Japan, and the Greek islands; and lived for many years in Western Massachusetts, a national treasure quietly walking the streets of Northampton. He was the poet laureate of Northampton from 2005-2007.

The Forgotten Dialect of the Heart

How astonishing it is that language can almost mean,
and frightening that it does not quite. Love, we say,
God, we say, Rome and Michiko, we write, and the words
Get it wrong. We say bread and it means according
to which nation. French has no word for home,
and we have no word for strict pleasure. A people
in northern India is dying out because their ancient
tongue has no words for endearment. I dream of lost
vocabularies that might express some of what
we no longer can. Maybe the Etruscan texts would
finally explain why the couples on their tombs
are smiling. And maybe not. When the thousands
of mysterious Sumerian tablets were translated,
they seemed to be business records. But what if they
are poems or psalms? My joy is the same as twelve
Ethiopian goats standing silent in the morning light.
O Lord, thou art slabs of salt and ingots of copper,
as grand as ripe barley lithe under the wind’s labor.
Her breasts are six white oxen loaded with bolts
of long-fibered Egyptian cotton. My love is a hundred
pitchers of honey. Shiploads of thuya are what
my body wants to say to your body. Giraffes are this
desire in the dark. Perhaps the spiral Minoan script
is not a language but a map. What we feel most has
no name but amber, archers, cinnamon, horses and birds.

Love is apart from all things.
Desire and excitement are nothing beside it.
It is not the body that finds love.
What leads us there is the body.
What is not love provokes it.
What is not love quenches it.
Love lays hold of everything we know.
The passions which are called love
also change everything to a newness
at first. Passion is clearly the path
but does not bring us to love.
It opens the castle of our spirit
so that we might find the love which is
a mystery hidden there.
Love is one of many great fires.
Passion is a fire made of many woods,
each of which gives off its special odor
so we can know the many kinds
that are not love. Passion is the paper
and twigs that kindle the flames
but cannot sustain them. Desire perishes
because it tries to be love.
Love is eaten away by appetite.
Love does not last, but it is different
from the passions that do not last.
Love lasts by not lasting.
Isaiah said each man walks in his own fire
for his sins. Love allows us to walk
in the sweet music of our particular heart.

A Brief for the Defense

Sorrow everywhere. Slaughter everywhere. If babies
are not starving someplace, they are starving
somewhere else. With flies in their nostrils.
But we enjoy our lives because that’s what God wants.
Otherwise the mornings before summer dawn would not
be made so fine. The Bengal tiger would not
be fashioned so miraculously well. The poor women
at the fountain are laughing together between
the suffering they have known and the awfulness
in their future, smiling and laughing while somebody
in the village is very sick. There is laughter
every day in the terrible streets of Calcutta,
and the women laugh in the cages of Bombay.
If we deny our happiness, resist our satisfaction,
we lessen the importance of their deprivation.
We must risk delight. We can do without pleasure,
but not delight. Not enjoyment. We must have
the stubbornness to accept our gladness in the ruthless
furnace of this world. To make injustice the only
measure of our attention is to praise the Devil.
If the locomotive of the Lord runs us down,
we should give thanks that the end had magnitude.
We must admit there will be music despite everything.
We stand at the prow again of a small ship
anchored late at night in the tiny port
looking over to the sleeping island: the waterfront
is three shuttered cafés and one naked light burning.
To hear the faint sound of oars in the silence as a rowboat
comes slowly out and then goes back is truly worth
all the years of sorrow that are to come.