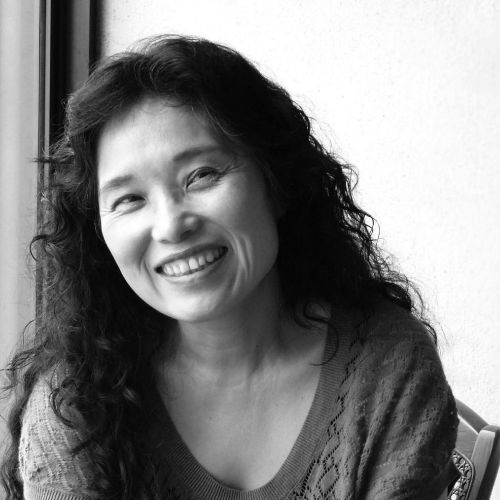 Fierce, witty, and vibrant—and dubbed by Anne Waldman as “a true sister of the beats”—Radical feminist poet Hiromi Ito is a key figure in Japanese poetry, noted for her innovative experiments with language. Waldman goes on to praise Ito for celebrating “the exigencies and delights of the paradoxically restless/rooted female body.” As her translator, Jeffrey Angles, observes, she “taps into the cultural unconscious of Japan, or perhaps even womanhood as a whole.”

Often described as a “shamaness of poetry,” Ito debuted in 1978 with the collection The Plants and the Sky (Kusaki no sora). The leading voice in Japanese women’s poetry throughout the 80’s, she also published several essay collections on child-rearing including Yoi oppai, warui oppai (Good Breasts, Bad Breasts) and the series Onaka hoppe oshiri (Tummy, Cheeks, Bottom). In the mid-90’s, she took a break from poetry and began writing fiction, receiving critical acclaim for such works as Ra ninya (La nina, 1999). Returning to poetry with Kawara arekusa (Wild Grass on a Riverbank, 2005) and Toge-nuki: Shin Sugamo Jizô engi (The Thorn-Puller: New Tales of the Sugamo Jizô, 2007), Ito established a unique narrative space by interweaving folklore and contemporary poetry. Focusing on the themes of the body and voice, and delving into her own life, she transcends the genres of poetry, fiction, essays and translation to express the universal.

Recipient of several prestigious Japanese literary prizes, including the Takami Jun Prize, the Hagiwara Sakutaro Prize, and the Izumi Shikibu Prize, Ito has also published translations, notably Karen Hesse’s Newbury Award-winning novel Out of the Dust (Biri jô no daichi) and Doctor Seuss’ The Cat in the Hat.

The pleasure of another’s embrace is so strong
I want nothing more
Even though situations change, I make the meals
I use the essential spices and oils
Marjoram
Dill
Coriander, fennel
Garlic
Rosemary
The people I take care of

In her sweet voice, my child too
Has a touch of cold
My youngest follows suit, her cold continues
Her habit of grasping my nipples also doesn’t disappear
When grasped, my nipples hurt
They are withered, not a drop comes out
Grow old
We grow old
Menopause should have come
And so the many daughters whom I have born
Soak up the dripping from my youngest daughter’s nose
Wipe the diarrhea pouring from my youngest daughter’s behind
Just like they were
Hundreds, thousands of mothers
Into this, they pour their accumulated desires
With her treatment, my youngest
Accepts the caresses of her older sisters
Her body becomes wrapped in song
She hears meaning in fragments
For such a long time, brown sugar, sweet, sweet, sweet, sweet
Meaning is in fragments without meaning
Sweet, sweet, sweet, coriander
Rosemary

My older sister told me she wanted to have her last child at thirty-nine
My older sister who grew up with me, five years my senior
That’s what she thought when she saw that man
That man with the axe under his arm
That man with the axe under his arm and the nose ring
She schemed to have sex with him but
When she met him, her desire to give birth had faded
My older sister’s girls are very big now
My younger sister’s dream
Is to wander her whole life
To have children in distant lands with native men
To scatter children in those lands
Or so said my younger sister who grew up with me, two years my junior
Taking the children she wants
Leaving the children behind she doesn’t
Wiping out the children she wants to kill
Marjoram
Rosemary
Fennel, coriander
We can still have more
We can still have more
If I gave birth again, I would live
With my older and younger sisters
If we wanted to touch each other erotically, we would do it
If we wanted to have sex, we’d go outside and do it
That’s is our promise
I’d eat with my sisters
My companions
Through speech and silence
We’d embrace
And listen to the sounds of
Each other’s breath
Through the night

Father’s Uterus, Or The Map

In that room various body parts
Are stuffed into various bottles
We saw various deformities, various strange diseases
We could have seen various dead bodies but
The men didn’t want to go there
That’s why all I saw were parts of bodies
Body parts that had changed color in the liquid
No chance
Of them coming back to life

Of course the man who gave me the map
And immediately started to stand watch
Regretted his actions
He writhed with regret
Be quiet (I wished)
Drop dead (I wished)
He should die the dullest death imaginable
Dashing chewed gum to the floor or
Disappearing suddenly in a burst of wind or
Starving to death or something
Still the man gives me a map in order to keep watch
No matter when, no matter where, he is standing there in the map
He appears even inside the bottles, come back to life
But the man regrets
He writhes with regret
No choice but to leave him be
Call out and
Immediately he is standing there
He is going to thrash me
The man’s blood vessels brim to overflowing
The same way they have dozens, hundreds of times
Father, older brother
Husband, lover, teacher, whatever I call him

The Maltreatment of Meaning