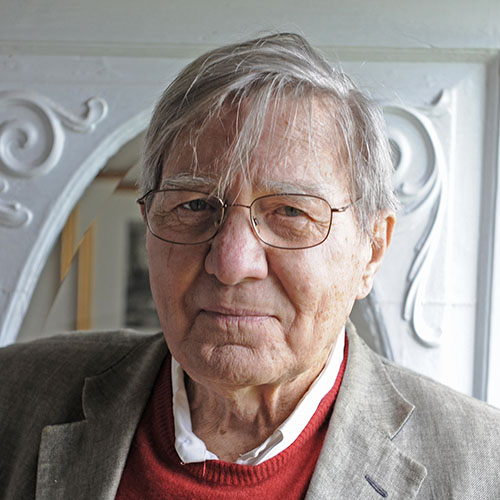 Winner of both the Pulitzer and the National Book Award for his Selected Poems, and recipient of a MacArthur Genius Grant, Galway Kinnell has been a major figure in American poetry for over four decades. His iconic poems have won him an large and passionate following. He is the author of ten books, including The Book of Nightmares, When One Has Lived a Long Time Alone, A New Selected Poems, and, most recently, Strong is Your Hold.

Poet Mary Oliver called Kinnell “one of the elegant and reliable voices of our times,” writing that he “rarely fails to reach beyond himself as well as into himself in his poems—his work is concerned with the relationship of our lives to the universe.” According to The Dictionary of Literary Biography, Kinnell’s poems reflect and underline the “constant impingement of the other-than-human on our lives.” “His point,” writes Publishers Weekly, “seems not to describe or illustrate facts of nature, human or inhuman, but to summon their essence, with lyric violence or tenderness, and to confirm a kinship.”

In addition to his many books of poetry, Kinnell has enriched the literary landscape with a novel, a collection of interviews, and a children’s book. He edited The Essential Whitman and has published translations of works by Yves Bonnefoy, Francois Villon, and Rainer Maria Rilke (The Essential Rilke, 1999, with Hannah Liebmann).

Born in Rhode Island and educated at Princeton, Kinnell served as a chancellor of the Academy of American Poets and has been recipient of a Guggenheim Fellowship, the Medal of Merit of the National Institute of Arts and Letters, and the Frost Medal. He has held lectureships abroad, in France and Iran, and taught widely in the U.S., most notably as the Erich Maria Remarque Professor of Creative Writing at New York University. Kinnell was the State Poet of Vermont from 1989-1993.

Everyone Was In Love

One day, when they were little, Maud and Fergus
appeared in the doorway naked and mirthful,
with a dozen long garter snakes draped over
each of them like brand-new clothes.
Snake trails dangled down their backs,
and snake foreparts in various lengths
fell over their fronts. With heads raised and swaying,
alert as cobras, the snakes writhed their dry skins
upon each other, as snakes like doing
in lovemaking, with the added novelty
of caressing soft, smooth, most human skin.
Maud and Fergus were deliciously pleased with themselves.
The snakes seemed to be tickled, too.
We were enchanted. Everyone was in love.
Then Maud drew down off Fergus’s shoulder,
as off a tie rack, a peculiarly
lumpy snake and told me to look inside.
Inside the double-hinged jaw, a frog’s green
webbed hind feet were being drawn,
like a diver’s, very slowly as if into deepest waters.
Perhaps thinking I might be considering rescue,
Maud said, “Don’t. Frog is already elsewhere.”

From STRONG IS YOUR HOLD
(Houghton Mifflin Company, 2006)

I love to go out in late September
among the fat, overripe, icy, black blackberries
to eat blackberries for breakfast,
the stalks very prickly, a penalty
they earn for knowing the black art
of blackberry making; and as I stand among them
lifting the stalks to my mouth, the ripest berries
fall almost unbidden to my tongue,
as words sometimes do, certain peculiar words
like strengths or squinched or broughamed,
many-lettered, one-syllabled lumps,
which I squeeze, squinch open, and splurge well
in the silent, startled, icy, black language
of blackberry eating in late September.

Wait.
Don’t go too early.
You’re tired. But everyone’s tired.
But no one is tired enough.
Only wait a little and listen:
music of hair,
music of pain,
music of looms weaving our loves again.
Be there to hear it, it will be the only time,
most of all to hear your whole existence,
rehearsed by the sorrows, play itself into total exhaustion.