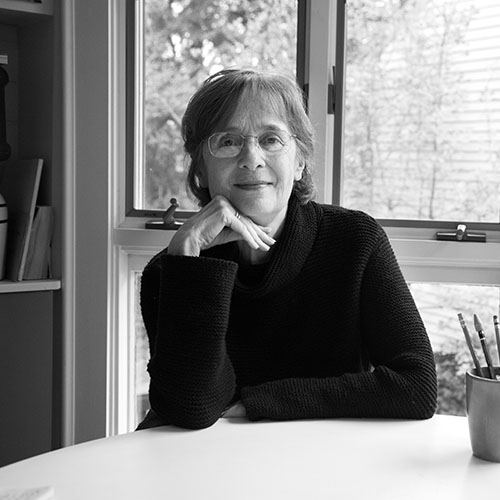 Gail Mazur's poems refuse to accept the familiar at face value. As she says, her mind is in “a constant argument with the self.” Her attention to the din and detail of life is transformative, a kaleidoscopic recasting of fragments from the everyday world. Tikkun magazine has noted that “Gail Mazur asks the fundamental questions of a life animated by a social and existential conscience.” Mazur’s deft treatment of the anxieties that spring from such a life elicited this response from the poet Michael Ryan: “It makes me happy to see my frightening condition so skillfully rendered.”

As The Women’s Review of Books writes, “[Mazur] takes readers into deep, psychic terrain.” In the title poem of her latest collection, Forbidden City (2016), she asks, on the edge of waking from a dream, “Who are we?/Are we fictional?” This is the shifting space many of Mazur’s poems inhabit, the crossroads of darkness and light, of grief and joy. For Mazur, truth is not free of contradictions; rather, her skillfully juxtaposed contradictions clarify the truth. In her poem “Little Tempest,” even disaster is granted order when collected into an imagined newspaper, “The Catastrophe Daily.” Much of Mazur’s recent work reflects on the death of her husband, the artist Michael Mazur (1935-2009). Naturally, artists—visual artists like Hiroshige and Hokusai, but also the poet Bishop, and composer Satie, for example—populate the pages of Mazur’s work, and the vocabulary (visual, written, musical) of these makers’ works serves as a bridge between the ordinary, current world and the realm of creative force and shared memory.

In addition to Forbidden City, Mazur’s books include Zeppo’s Wife, winner of the 2006 Massachusetts Book Award and finalist for The Los Angeles Times Book Prize as well as the Paterson Poetry Prize, and They Can’t Take That Away from Me (2001), a finalist for the National Book Award. Booklist writes, “Mazur’s poems read like phone calls from friend who confides a rush of contradictory feelings in a warm and compelling voice that could, dear reader, be your own.” Mazur has also translated poems from the Italian by Michaelangelo and contemporary poet Vittorio Sereni.

A graduate of Smith College ’59 (B.A. English Literature), as well as Lesley College (now Lesley University, M.A.), Mazur has received the St. Botolph Club Foundation’s Distinguished Artist Award, as well as grants from the Bunting Institute of Radcliffe College and the National Endowment for the Arts. She has long been active in the Boston and Cambridge literary communities, having served as founding director of the Blacksmith House Poetry Center and Reading Series at the Cambridge Center for Adult Education, Advisory Editor to both Agni and Ploughshares, and as Distinguished Writer in Residence at Emerson College. Mazur lives in Cambridge and Provincetown, where she is an important presence at the Fine Arts Work Center, serving on the Writing Committee, the Board of Trustees, and the Summer Program Committee.

As if I had no language
and would begin again
in the linguistics
of infancy,
but amnesiac
therefore with nothing
to say –

(unlike the woman in rehab
who could walk
and walked in the linoleum
at all hours, shouting
to no one, I KNOW
THE WORDS! I KNOW THE WORDS!

-all the words
she knew)

I walked,
past a yard
overgrown, scraggly
after the first frost,
a rose-the bitterest orange-
still blooming, piercing
the morning

(My work had stopped,
I thought
forever)

Not to be thinking
Is this enough, this
moment, the chilled
unpromising air,
not to be wanting more
than I’d been given,
but remembering

last October when
I carried a glass vase,
its rose
lush, creamy
across my living room
for your appreciations,

how you rose from
the rush-seated chair
to meet it saying,

What would be strange
in someone else’s bed, familiar
here as the body’s jolt
at the edge of sleep-body
persistent, solitary, precarious.

I watch his right hand float
in our bedroom’s midnight,
inscribe forms by instinct on the air,
arterial, calligraphic
figures I’m too literal to follow

I close my book quietly,
leave a woman detective to tough
her own way out of trouble-
local color of Chicago, Sears Tower,
bloodied knuckles, corpses.

I turn to him-
who else would I turn to?-
but I can only watch
for a few minutes at a time
the mysterious art of his sleep.

If I touch his hand, he won’t know it,
and it’s always comforted me

to feel the vibration
the singular humming in him,
nocturnal humming…

My mystery falls to the floor,
nothing I’ll think about tomorrow –
I’m listening for the breath
after this breath,
for each small exhalation

Is this the way it has to be-
one of us always vigilant,
watching over the unconscious
other, the quick elusory
tracings on the night’s space?

That night two years ago
in the hospital, tubes
in his pale right hand,
in his thigh, I asked myself,
does he love me?

and if he does,
how could he let that steely man
in green scrubs snake his way
nearer to his heart
Than I’ve ever gone?

Sometimes I have delusions
of total recall, tyrannical, crazy.

Crazy is what I thought years ago,
“You’re crazy!”
when I built a home
over my father’s bulldozed house.

Nothing’s ever lost to me,
certainly not the arsonned pieces of that place
that erupt like clocks
in the rockiness of my yard.

and this morning, by the door,
I found a porcelain shard,
part of the upstairs bath.

Commonplace relics,
they hide themselves in a common grave,
then, break out on my path;

they bide their time, they just won’t quit,
not while I live –
burnt scraps, artifacts, detritus-
they’re memory’s arsenal
stockpiled under sumac and ferns…

A bit of blue China to make me shiver,

once the perfect world
I pushed and poked mashed turnips around-

Oh, unfathomable figures
so displaced below me,
so fixed in their pitless purposes!

blackened kneaded eraser beside you in the grass.

Three bare oak trees. You loved what you called

the spikiness of forms, agreed with Rodin

that nothing in nature is ugly.

Monumental, burnt, those trees expressive for you,

as close as if your charcoal had been made of them.

You loved the susurrus of brush on canvas,

the sh shh that charcoal made on paper,

you even liked ekphrastic poems (I hated them).

You’d love me writing this.

That day I asked − was it the only time I asked? −

what you’d been thinking while you drew,

and you looked at me blankly

(you’d already explained so much to me,

that day I wanted to know more,

(from The Map of Every Lilac Leaf: Poets Respond to the Smith College Museum of Art, 2020)