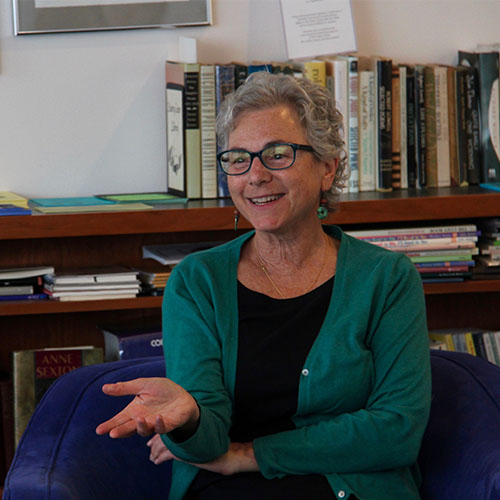 Ellen Bass’s poems pulse with sex, humor and compassion. She says she writes about these things because “we are all so terribly imperfect—starting with myself. And that willingness to feel, even a little, what someone else is feeling is what joins us most intimately to others.” Convinced that compassion is deeply connected to the creative imagination, to poetry, she has noted, “I want to speak from me to myself and then from me to you.”

Bass’s work has appeared in hundreds of journals and anthologies including The New Yorker, The Atlantic and The American Poetry Review. She is the author of three books of poetry, Mules of Love (2002), The Human Line (2007) and, most recently, Like a Beggar (2014), which have garnered praise for its great intelligence and heart. “The irony,” writes Toi Derricotte, is that Like a Beggar is a book about riches. These are luxurious poems, full of gorgeous language; and they also ‘muddy their hands with the actual,’ and ‘handle the hard evidence of the earth.’” In the words of Marie Howe, the book was “written in service and celebration of Eros, the life force that can wake us, the weary citizens of this all too broken world. The poems know what they contend with; they don’t flinch. Then they sing their joy.”

In addition, Bass co-edited (with Florence Howe) the groundbreaking No More Masks! An Anthology of Poems by Women (1973). Other nonfiction books include Free Your Mind: The Book for Gay, Lesbian, and Bisexual Youth—and Their Allies (1996), Beginning to Heal: A First Book for Men and Women Who Were Sexually Abused as Children (revised 2008), I Never Told Anyone: Writings by Women Survivors of Child Sexual Abuse (1983) and The Courage to Heal: A Guide for Women Survivors of Child Sexual Abuse (1988), which has sold over a million copies and been translated into ten languages.

Bass earned an MA in creative writing from Boston University, where she studied with Anne Sexton. Her honors and awards include two Pushcart Prizes, a Pablo Neruda Prize, a Larry Levis Reading Prize, a Lambda Literary Award, a New Letters Prize, and fellowships from the National Endowment for the Arts and the California Arts Council. She teaches in the low residency MFA program at Pacific University and has taught poetry and creative writing in Santa Cruz.

Bad things are going to happen.
Your tomatoes will grow a fungus
and your cat will get run over.
Someone will leave the bag with the ice cream
melting in the car and throw
your blue cashmere sweater in the dryer.
Your husband will sleep
with a girl your daughter’s age, her breasts spilling
out of her blouse. Or your wife
will remember she’s a lesbian
and leave you for the woman next door. The other cat—
the one you never really liked—will contract a disease
that requires you to pry open its feverish mouth
every four hours. Your parents will die.
No matter how many vitamins you take,
how much Pilates, you’ll lose your keys,
your hair, and your memory. If your daughter
doesn’t plug her heart
into every live socket she passes,
you’ll come home to find your son has emptied
the refrigerator, dragged it to the curb,
and called the used-appliance store for a pickup—drug money.
The Buddha tells a story of a woman chased by a tiger.
When she comes to a cliff, she sees a sturdy vine
and climbs halfway down. But there’s also a tiger below.
And two mice—one white, one black—scurry out
and begin to gnaw at the vine. At this point
she notices a wild strawberry growing from a crevice.
She looks up, down, at the mice.
Then she eats the strawberry.
So here’s the view, the breeze, the pulse
in your throat. Your wallet will be stolen, you’ll get fat,
slip on the bathroom tiles in a foreign hotel
and crack your hip. You’ll be lonely.
Oh, taste how sweet and tart
the red juice is, how the tiny seeds
crunch between your teeth.

The first time I saw my boyfriend’s penis,
I thought the shaft would be covered with hair,

like the grassy knoll of my own sex.
My grandmother plucked the last feathers

off the capon, its skin slippery, follicles
little crater shaped bumps. I once wrung

the neck of a naked bird fallen from its nest,
a shard of shell still stuck to its down. Nakedness

of the newborn, smeared with vernix and blood,
the tough swirled cord pulsing, splayed like a frog

on the sunken belly of the mother. Nakedness
of my mother’s body cooling, blood receding

and prickled as a cactus paddle. When the Torah
is lifted from the ark, it’s an honor to take off

its silver crown and breastplate, velvet cloak and robe.
After the day’s portion is read, it’s an honor to dress

the naked Word again. Laura shaved her head
so she wouldn’t have to watch her hair fall prey

to the teeth of the comb, leave a pool on her pillow.
Manet painted Luncheon on Grass, cherries

and yellow pears tumbling from the basket.
The two men are dressed, complete with ties

and coats, the woman is naked. In the seventies
The Total Woman advised wives

to greet their husbands at the door bound
in Saran Wrap. I knew a woman who liked

to clean house naked. If someone rang the bell,
even a pair of Jehovah’s Witnesses in white shirts

and black laced shoes, she answered it like that.
It was her house, she said. My husband was

her husband’s therapist. When her husband
killed himself, my husband quit his practice.

That was long ago, my ex-husband’s dead too.
When we were married he wanted me to sleep naked.

I said my shoulders got cold. So he took my
flannel nightgown and cut it off under the armpits.

We laughed so hard you’d have thought
we’d stay together. Once I passed a woman

hiking in the hills of Santa Cruz, naked
except for white athletic shoes. When my children

were small they loved to be naked. My son
stood on his chair at the dinner table, his tiny penis

poised above his plate. I was in a hotel in Missouri
flipping through the stations on TV. Half the shows

were women flashing their breasts, jamming
themselves in front of the camera or on all fours

being fucked from behind. The other half were
fundamentalists ranting against them. I love to lie

down next to Janet’s naked body. Her heat
is the closest thing I know to the sun.

So many years ago we rolled naked
down the dunes in Death Valley. The perfect

cones of her breasts, dusted with grains of sand.
When Eleanor’s daughter could not recover,

her heart was lifted out of her chest, cupped
naked in the air, and planted in a Chilean

business man. Years later, she met him.
When they embraced she felt her daughter’s heart

beating against her breast. The nakedness of houses
when people have moved out, square shadows

where pictures were taken from the wall, pennies
and paperclips, insect carcasses. Sacramento

red brown dirt without rice shoots or walnut trees,
waiting naked for the next crop of houses and malls

Naked hunger. Naked fear. When you look into a face
and see the need, naked as peeled fruit. Naked prayer

you don’t believe in, but pray anyway
because you can’t help it, naked, stupid

in your hope. Your daughter is dancing in a cage,
her naked thighs that once pushed out between

your naked thighs, now wrap around a silver pole
while men hold their naked hunger in their naked

palms to escape their naked pain. But you can’t stop
thinking about her naked toes the first time you

took her to the sea.

Bone of My Bone and Flesh of My Flesh

I can’t always refer to the woman I love,
my children’s other mother,
as my darling, my beloved,
sugar in my bowl. No.
I need a common, utilitarian word
that calls no more attention to itself
than nouns like grass, bread, house.
The terms husband and wife are perfect for that.
Hassling with PG&E
or dropping off dry cleaning,
you don’t want to say,
The light of my life doesn’t like starch.
Don’t suggest spouse—a hideous word.
And partner is sterile as a boardroom.
Couldn’t we afford a term
for the woman who carried that girl in her arms
when she was still all promise,
that boy curled inside her womb?
And today, when I go to kiss her
and she says “Not now, I’m reading,”
still she deserves a syllable or two—if only
so I can express how furious
she makes me. But
maybe it’s better this way—
no puny pencil-stub of a word.
Maybe these are exactly the times
to drag out the whole galaxy
of endearments: Buttercup,
I should say, lambkin, mon petit chou.